Thanks, Prohibition! How the Eighteenth Amendment Fueled America’s Taste for Ice Cream

This past May, my classmates and I were discussing the latest fad in summer indulgences: wine ice cream. Ice cream and alcohol have been commonly paired in the past as a trendy treat, and wine ice cream is just the most recent innovation of the classic American dessert. In addition to being tasty, however, wine ice cream is perhaps the culmination of a coupling that has deep roots in history. In fact, it is clear that America’s favorite dessert—ice cream—must thank Prohibition for its variety and lasting popularity. 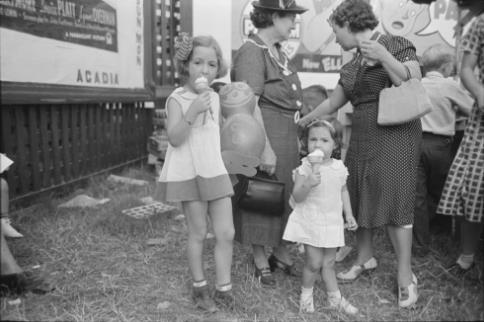 The Eighteenth Amendment went into effect on January 16, 1920, turning the once wet nation into a land of temperance. Although speakeasies and organized crime provided opportunities for the populace to continue their drinking habits, the per capita consumption of alcohol drastically dropped during the 13 years of Prohibition. Breweries and bars, forced out of alcohol production, turned to different industries that could help them outlast the ban. Coors expanded its pottery business, Pabst Blue Ribbon made cheese, and Yuengling and Anheuser-Busch made ice cream.

Frank D. Yuengling’s creation of the Yuengling’s Ice Cream Corporation was not just a method to keep his business afloat during Prohibition—it was a smart business move. Ice cream had been gaining widespread popularity in the United States since the late 19th century with the introduction of the ice cream soda, sundae, and cone. Advancements in refrigeration techniques also allowed for more businesses to sell ice cream. After the Volstead Act went into effect, the Brewers’ Board of Trade routinely received inquiries from ice cream parlors to buy the equipment and facilities from now-prohibited liquor businesses.[i] With the absence of alcohol, converting bars to soda fountains and ice cream parlors satisfied Americans’ need for a luxury treat.

The rise in ice cream fever was recognized across the United States. Between 1916 and 1925, ice cream consumption increased by 55 percent, whereas the population only increased about 15 percent.[ii] In a letter to the US State Department ahead of the 16th International Congress against Alcoholism, Walter C. Hughes, secretary of the National Confectioners’ Association, wrote that ice cream makers had “drawn greater proportionate profits out of the dry edict,” because consumers had more money to spend on comfort foods.[iii] By 1922, there were over 100,000 soda fountains in the United States earning about $1 billion, with ice cream being the most popular dish sold. The annual supply of ice cream for New Yorkers alone reached 300 million gallons.[iv] Confectionary and butter factories, recognizing its popularity, started to produce ice cream as a byproduct and manufactured more than $32 million worth of product in 1921.[v] Ice cream was also promoted for its purported health benefits with newspapers claiming, “Ice cream is something of which most children can never get enough, and dietitians say that few foods are better for building strong and healthy bodies.”[vi] Prohibition had increased its consumption a thousand fold.

The high demand for ice cream by the public encouraged innovation within the industry. In 1920, confectioner Christian Nelson created the I-Scream-Bar, which later became known as the Eskimo Pie—a name that persists until today despite its racist connotations. A rectangular block of vanilla ice cream covered in chocolate, the Eskimo Pie was an overnight sensation, selling millions of bars a day and earning about $1.5 million in royalties for Nelson by 1922.[vii]

Harry Burt enhanced Nelson’s idea by attaching the bar on a stick, allowing patrons to eat the frozen treat without getting their hands covered in chocolate. Burt named his creation the Good Humor bar and patented the process to make the treat in 1923. Using 12 trucks furnished with freezers, Good Humor men sold the bar in US neighborhoods, allowing children to make purchases without going to the parlor itself.

Other notable treats emerged from the Prohibition era. The popsicle was introduced formally in 1923, selling 6.5 million frozen juice treats in 1924. Dixie ice cream cups gained success that year when the Weed’s Ice Cream Company of Allentown, Pennsylvania, and Carry Ice Cream of Washington, DC, began to package their ice cream in the famous paper cups. The Drumstick was later created in 1928 when Bruce, I. C., and J. T. Parker added a chocolate coating and nuts to the classic ice cream cone. These frozen desserts offered new, handy, and fresh ways of eating America’s favorite indulgence.

When the Prohibition era ended in 1933, the popularity of ice cream decreased slightly. Men who once frequented the soda fountains and parlors could again return to their favorite bars or saloons. However, ice cream was already permanently engrained in US culture. During World War II, ice cream regained its popularity as a comfort food and was served to each branch of the military. The US Navy even had an “ice cream barge,” which could produce 10 gallons every seven minutes and deliver the treat to sailors throughout the Pacific theater.[viii] By 1960, the classic white cart of Good Humor offered 85 different flavors or combinations of ice cream, all stemming from the original creation.[ix]

Today, the average American eats about 22 pounds of ice cream per year. Our taste for the frozen treat has encouraged new flavors and creations well beyond the original ideas of Nelson and Burt. So when you cool off this summer with a bowl of Chunky Monkey or attempt to get tickets for New York City’s new Ice Cream Museum, remember the history of your dessert and the amendment you have to thank for it.