Scalawags and Scandal-Mongers: Intra-party Rivalry and the Complex World of Reconstruction Politics

On a warm afternoon in late February 1871, Dr. William M. Compton found himself in what he would later call “a fix.” Before him stood his wife, Ernestine, furious and demanding to know what he was doing napping on a young nurse’s bed. To make matters worse, she was confronting him in front of an entire ward of psychiatric patients, staff members, and a party of elite Jacksonians who were touring the asylum. 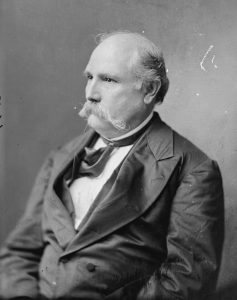 James Lusk Alcorn, a prominent Republican figure from Mississippi, served as the state’s senator to the US Congress and its governor from 1870 to 1877. Credit: Wikimedia Commons

As he stood there, exposed, flushed, and somewhat groggy, Compton struggled to find the right words. Not only was his marriage at stake, but so was the reputation of the asylum, his career, and the fate of moderate Reconstruction in Mississippi.

It took me a while to completely understand how Compton’s sexual indiscretions (real or not) related to the history of post-Civil War Mississippi politics. In my previous post, I wrote about how a limited source base taught me to alter my perspective and form new research questions. I had been combing the asylum’s records looking for evidence of mental trauma among veterans and civilians, but I quickly realized that the available sources were mostly silent in this regard. What I did have were pages upon pages of Dr. Compton’s annual reports and a series of fascinating testimonies regarding his alleged relationships with a popular and gifted nurse named Lou Gray. Not only did these sources help me understand life at the state asylum, they also taught me that Reconstruction’s battles should not be seen simply as a fight between racist Democrats and antiracist Republicans. I learned that the historical reality was much more complex than traditional political categorizations would suggest.

During the state’s investigation into his conduct, Compton knew that a lot more than his personal and professional reputation was at stake. Compton’s testimony and the press’s coverage of the affair clearly show that the centrist form of Reconstruction he supported was also in danger. As a member of a moderate faction within the Republican Party led by James Lusk Alcorn, Compton sought to forge a biracial faction that supported civil rights for African Americans (like the radical Republicans) and opposed the political proscription of former Confederates (like the Democrats). They were also racial assimilationists—as opposed to antiracists or segregationists—who believed in gradually “elevating” blacks to full citizenship through education and social reform.

When Alcorn was elected governor of the state in 1870, he appointed Compton superintendent of the State Lunatic Asylum, and the pair worked hard to reform the institution. They poured thousands of dollars into it, made it free to the public, and improving the living conditions of its black patients. Like most asylums of the time, the Mississippi State Lunatic Asylum aspired to be a beacon of order, health, and modernity in an otherwise chaotic, tainted, and barbaric world. And since Alcorn and Compton were eager to present the asylum as an example of their effectiveness in office, any perception of abuse or impropriety at asylum would serve as a powerful symbol of their faction’s moral failings.

While it is not clear if the allegations against Compton and Gray were true, we can ascertain where they came from. Shortly after taking office, Alcorn rescinded a lucrative state printing contract from a radical paper called the Jackson Pilot and awarded it to his own political organ, the Jackson Leader—edited by none other than Dr. Compton and printed at the asylum. The proprietors of the Pilot attempted to regain the contract through a series of court battles; however a new and perhaps more expedient opportunity to defeat Alcorn and his allies appeared in February 1871.

While the Leader’s case was in adjudication, rumors began to swirl around Jackson that Compton had fired the asylum’s matron, Clarissa Noble, because she discovered he was having an affair with a nurse. The radicals moved quickly to help Noble level charges of sexual misconduct against Compton and Gray. Sex scandals were salacious enough, but one at the asylum titillated even the most staid imagination. Facing criticism in the press and whispers from the public, Alcorn ordered the asylum’s Board of Trustees to gather testimonies and determine if anything criminal had occurred. As Republicans forwarded charges against members of their own party while Democrats watched from the sidelines, it became clear to everyone who was watching just how hopelessly divided the party of Reconstruction had become by 1870.

Accounts vary as to what occurred on February 23, 1871, but we can put together a rough timeline of what led to Noble’s dismissal and the ensuing charges. Noble testified that she found Compton in the room of Lou Gray, the asylum’s senior female attendant. According to Noble, she saw Dr. Compton lying on Gray’s bed through a gap in some window curtains. Shortly thereafter, Ernestine Compton (whether by her own volition or summoned by Noble) appeared on the floor, chased off Lou Gray, and confronted her husband in front of some patients and a party of women who were touring the asylum.

The trustees’ investigation was a classic case of “he said, she said” that favored Compton. The testimonies against him revolved primarily around what witnesses had seen at the asylum. Testimonies in his defense emphasized the strength of his character and Noble’s lack thereof. Compton’s long testimony focused primarily on juxtaposing the matron’s moral and professional shortcoming with Lou Gray’s virtue and purity. He insisted that he had no interest in defending himself; instead, Compton wanted to bring justice to Gray and the reputation of the asylum as a place of safety, convalescence, and order. After all was said and done, Alcorn kept the investigation findings secret and the trustees declared that “the rumors of criminality were not sustained by the evidence which they had been able to procure.” Compton stayed on as superintendent at the asylum, but the affair torpedoed his political future.

I had to learn a range of investigative skills in order to piece this narrative together—skills I could have not learned without hands-on experience in the archive. No single document linked the radical Republicans to the allegations against Compton and Gray. In fact, his condemnation of “envious and aspiring outside doctors, dismissed attendants, [and] political demagogues” can be easily read as a criticism of his obvious political rivals—the Democratic Party. After all, he had spent most of his life as an “Old Line Whig” or a Republican. The research process taught me how to wrestle with my sources, track down leads, apply for funding to spend more time in the archives, and make connections that were not immediately obvious. What emerged was a postwar political world with no clear battle lines, where political loyalties were fluid, and racial thought was malleable. It was a world as unpredictable as ours, full of people stumbling around in the dark. I wanted to understand Reconstruction from the perspective of one of these people. Lou Gray seems to have disappeared, but the enigmatic Klansman-turned-Republican remained. I’d have to delve deeper into Compton’s personal history for the answers I was searching for.