Eric G. E. Zuelow is an associate professor of European history at the University of New England. He lives in Portland, Maine, and has been a member since 1998. 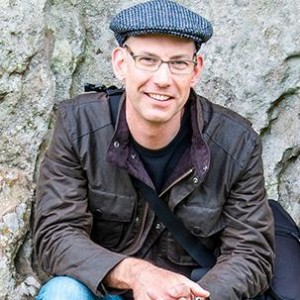 When did you first develop an interest in history?
I first fell in love with history as a kid. My parents saved up and we took a five-week driving tour of England, Scotland, and Wales. There is nothing quite like exploring castles and cathedrals to excite the imagination.

When I entered college I was set on a career in journalism, but then in 1993 a friend and I were backpacking through Europe when we stopped in at a little pub outside York Minster. A Scottish footballer and his wife came in. He had a thick Lallans accent and I could not understand a word of what he was saying to me. At some stage nodding my head like a bobblehead seemed rude, so I asked him about his feelings regarding the Scottish National Party. He pounded the table, spilled his pint, and started yelling something about f***ing English b****ds: somewhat ironic given the setting. This was before American politics became quite as divisive as it is now and I immediately got very curious. That led to a year abroad experience in Aberdeen during which I spent lots of time at SNP meetings, dug through archives, and interviewed a number of people who were involved in fairly extreme fringe activities. I was an undergrad, but a number of professors expressed interest in my work. The research was fun, being taken seriously was encouraging, and I began to think about a scholarly career of some sort. At the time I was a political science major, but my undergraduate advisors realized that I had a head for history and that I would not long enjoy the methodological and subject limitations inherent in political science.

What projects are you currently working on?
I am currently returning to a briefly sidelined project about postwar English pubs that examines a series of interrelated elements of life: nostalgia and heritage, changing notions of sociability, and the implications of globalization for English identity. It is a fun subject that I believe has the potential to really uncover a lot about postwar England.

Beyond that I am the editor of the Journal of Tourism History (Routledge). The journal is interdisciplinary but with a strict historical focus. Editing is really challenging and time-consuming work. At the same time, it is interesting both to see new scholarship as it emerges and to grapple with the various issues facing publishing. Setting aside the difficult economics of the industry, the reality is that reliance on adjuncts and a focus in many places on “outputs” (which never include book reviews or doing peer review) is having a dramatic and not at all beneficial impact on the distribution of knowledge.

Have your interests evolved since graduation? If so, how?
My first book, Making Ireland Irish: Tourism and National Identity since the Irish Civil War (Syracuse, 2009), is firmly about nationalism and national identity in Ireland. It argues that various groups used tourism as a way of working out different collected identities. It is very much a book about Ireland and the Irish, but I kept finding archival documents that pointed to something bigger; there were transnational connections all over the place. The Irish drew from French and American models. They were inspired by the Nazi leisure organization, Kraft durch Freude. Marshall Planners applied significant pressure.

That transnational element has caught my attention more and more since leaving grad school. I did an edited collection on how transnational connections shaped tourism in Europe (Touring beyond the Nation [Ashgate, 2011]). My most recent book is a global history of tourism, taking the story from English origins to the world stage (A History of Modern Tourism [Palgrave, 2015]). My current project, although nominally about English pubs and “real ale,” is as much about globalization as it is about thatch cottages, cozy firesides, and pints of bitter.

Is there an article, book, movie, blog etc. that you could recommend to fellow AHA members?
I am really excited about two films at the moment, both of which capture a lot of the complexity of change in the early 21st century. The first is Story of the Weeping Camel (2003). It is a film about a Mongolian family whose camel will not accept its calf, so they need to find a violin player to perform a ceremony. The results are astonishing and the scene where the musician plays is like nothing I have ever seen before, but the movie is about a lot more. It is really about evolving notions of time, about connections to the land as those connections disappear, about the encroachment of technology, even in the most remote places, and even about notions of childhood. None of it is heavy-handed, but it makes you think. Really something. The other is Calvary (2014). It deals with the impact of the sex abuse scandal in rural Ireland, but here again the movie addresses a lot more—especially the splintering of the social fabric in small communities.

What do you value most about the history profession?
I love the flexibility of it. There are so many brilliant things to study and such an exciting variety of ways to explore them. No other discipline merges scientific rigor with artistry in the same way, or gives such freedom to pursue the countless relationships that define the human experience.

Why have you continued to be a member of the AHA?
I feel very strongly about the importance of history as a discipline of study and about the social and professional networks that help to hold it together. The AHA represents our best bet for weathering a difficult climate for history departments. At a time when many politicians celebrate STEM at all costs and without question, even telling young people that studying history will be a one-way ticket to a Humanities Hooverville (a reference these politicians would not understand!), we need groups such as the AHA to push back and to speak out. I want to be a part of that response.

Do you have a favorite AHA annual meeting anecdote you would like to share?
No one anecdote in particular, more a general note. I really look forward to going each year. Not only is it a chance to catch up with old friends, but also to make new ones. I love the book fair and the occasion to talk with editors about current and future trends, as well as about shared challenges. It is a brilliant opportunity to learn about branches of scholarship that are very different from my own.

Other than history, what are you passionate about?
I have been a competitive cyclist since I was 12 years old, with a short lapse during the first years of graduate school. As a youngster, I specialized in track cycling (done on a banked track called a velodrome). In more recent years (as I live far from the nearest track), I have focused on time trialing—a race against the clock that gives primacy to aerodynamics and fitness. Thinking about training and equipment is a lot of fun and a nice break from my professional life. What is more, the nature of the sport means that there is always room to improve. It is a constant challenge.