The Other Drayton Hall: South Carolina Plantation Architecture in the Documentary Record

In 1861, former South Carolina governor William Bull burned down his house because he was worried that the Yankees might get it. In studying Barbados, the American South, and the Greater Caribbean, I’ve become familiar with the ways the environment slowly chips away at the things that humans construct. Hurricanes, earthquakes, fires, termites, encroaching vines, and the simple decay of organic matter often make investigating the material past difficult. In their own way, however, human beings are more destructive—the house that Bull burned down had stood in that spot for more than 130 years. 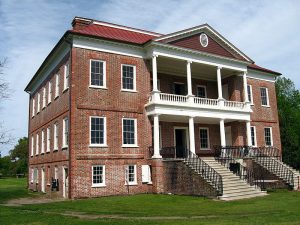 But Bull’s residence is not the only house in South Carolina that has been lost to history. Because of scheduling issues, I’ve put off my visit to South Carolina until September, so in this post I will discuss how to study a building you cannot visit. This is particularly useful for dealing with what I call “documentary buildings,” i.e. buildings that don’t exist outside of the documentary record.

Perhaps the most famous extant building in South Carolina is Drayton Hall, situated just outside of Charleston on the Ashley River in what was prime real estate during the 17th and 18th centuries (and still is today). What few people realize when visiting Drayton Hall is that the Drayton family originally settled on what is now known as Magnolia Plantation, just slightly upriver. If you visit Magnolia, you’ll find a magnificent 19th-century plantation house (the core of which is a late 18th-century hunting lodge floated down the river from Summerville) and a restored slave quarter set amidst some of the most beautiful gardens in the South. There is no hint, however, of Thomas Drayton’s earlier plantation, which was burned down by Union troops. 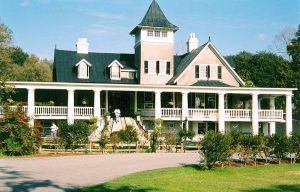 Thomas Drayton arrived to South Carolina from Barbados aboard the ship Mary in 1679. A census of the island of Barbados that year recorded that Drayton owned 12 acres, seven slaves, and the indenture of one white servant, in addition to one hired, white servant.1 While the initial settlement of Carolina had focused on timbering the land, by the time of Drayton’s arrival, food crops and cattle ranching were becoming profitable and it was in cattle ranching that Thomas Drayton made his fortune.

For the earlier Drayton plantation, you have to reach into one of my favorite parts of the documentary record: probate inventories. When someone died in the 17th or 18th centuries, a group of local men would gather together and be shown all of the deceased’s property, which they then appraised so that they could have a complete record of the total estate in the event that any creditors made a claim. For someone studying material culture, probate inventories are gold mines. Occasionally the individual’s property is listed “room by room” (as the appraisers walked through the house), at which point it reveals not just the objects, but the spaces they occupied. In July 1724, several of Drayton’s neighbors gathered so his wife could show them everything he owned. The inventory they produced now resides at the South Carolina Department of Archives and History, an incredibly rich and underutilized repository of colonial and antebellum records. A digitized version can be found online here.

First in the inventory is a list of Thomas Drayton’s liquid assets, which was somewhat unusual given the degree to which many planters operated on credit. “Cash left in the house at his decease” amounted to £20, in addition to £5000 from livestock sales and £200 from the “returns of a Negro ship’d off.” While it’s difficult to correlate currency, £20 at the time was more than a year’s income for most laborers in England. The majority of the inventory is a list of the names of the enslaved and an accounting of livestock. Drayton’s property included 112 horses, 26 oxen, and 3,726 cattle (of varying types) as well as Seboy, Robin, Peter, and January (all cattle hunters); two Indian slaves named August and Phyllis (plus her three children); and 17 children born to enslaved mothers between the time of Drayton’s death and the taking of the inventory, among many others. His will divided the 93 enslaved men, women, and children Drayton owned, along with his land, livestock, household goods, and cash, between his widow and three children. Those enslaved men and women would continue to live and work the land owned by the Draytons until the end of the Civil War—some of their descendants continued to live and work on the Drayton property into the 20th century.

The material possessions listed in the inventory reveal a household in transition from a frontier cattle ranch to the more genteel accommodation of a rice planter. The house was large—five sets of fireplace tongs suggest five separate heated spaces. Two sets of tongs were iron and three were brass, suggesting that two of those were work spaces or private spaces, while the other three were more genteel and on display. A one-and-a-half or two-story structure over a raised basement (known as an “English basement”), possibly the location of the work spaces, would have been typical, and an English tutor, writing of his time with the Draytons in the 1790s, described their home as “a venerable mansion.”2 The raised basement would have been necessary because digging into the soil on the banks of the Ashley River would have quickly produced water.

The Drayton mansion had a kind of frontier luxury. While some of the furnishings are described with adjectives like “old,” “coarse,” or “broken,” and a saddle and several guns are included with the household goods, there are also items identified as new or being of higher-value wood, fabric, or metal. Interestingly, the assessors described four of the five beds as “old,” suggesting that they were not discarding furnishings that were still serviceable in favor of better ones, and the inventory included just two sets of curtains—perhaps for the best room and bedchamber, which would have been on the first floor.

Without a detailed description or drawing to pair with the probate inventory, the house itself is nearly impossible to reconstruct, but a critical reader can gain access to the workings of the plantation, the daily lives of the occupants, the aspirations of the white planters, and important details about the enslaved men and women who worked on the plantation. These pieces of information are even more important when you move into standing structures and historic house museums, where myths and generalities can hide the harsh realities of the past.