Searching for the Quotidian in the Archives

Trade, Fraud, and Intercultural Relations in the Early Modern Mediterranean

This is the final post in a series by Jesse Hysell, one of this year’s AHA Today blog contest winners. His posts examine material exchanges between Venice and Egypt in the early modern period. Previous Posts include: Cultural Encounters and Material Exchanges in the Venetian Archives, The Politics of Pepper: Deciphering a Venetian-Mamluk Gift Exchange, and The Gift Thieves: Interpreting a Scandal in Early Modern Venice

In the late winter of 1492, the senate of Venice voted in favor of a collective boycott against a Syrian merchant in Damascus. The citizenry had accused a certain Omar of having absconded with 223 ducats belonging to a Venetian merchant, Andrea de Polis, in a sale of coral. According to the senate’s decree, Omar would be obligated to make restitution to Andrea before he could engage in any further trade with the Venetians. 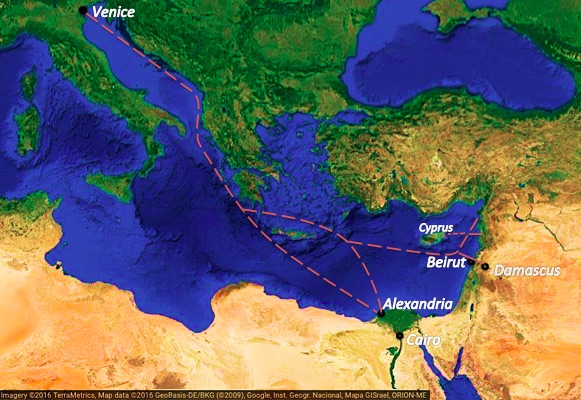 The Venetians’ principal trade routes with the Mamluks linked the port cities of Alexandria and Beirut to Europe. Map courtesy of Google

Writing this series has allowed me to discuss the course of my work in Venice while also drawing attention to some of the ways in which material goods influenced early modern cultural encounters. So far, my posts have focused on the use of ceremonial gifts in shaping the diplomatic rapport between Venice and Cairo. Yet it is equally important to ask what types of material interactions occurred below the high-level affairs of international politics and to consider the nature of daily interactions between Muslim and Christian merchants in the Mamluk Sultanate.

While analyzing the governmental records of the Archivio di Stato di Venezia, I discovered that Venetian merchants often accused their Muslim colleagues of fraudulent business practices. The Venetian senate regularly complained that their merchants in the east found themselves victims of “acts of deception from the Moors.” These duplicitous practices could take a number of forms, such as using false measures to weigh goods, diluting spices with dirt, or simply not fulfilling a crucial part of an agreement. In response to the ongoing trade problems, Venetian merchants called on their home government to help organize boycotts against the Syrian and Egyptian traders they accused of fraud and theft. Following a petition from the merchants, the senate would record the names of the individuals, the circumstances of the case, and then blacklist them.

Although it is difficult to assess the success rate of this punitive boycotting policy against Muslim merchants, a similar set of cases from the 1490s suggests that the system failed in preventing fraud or in allowing citizens to recoup lost assets. In 1495, the senate instructed the consul of Damascus to give a pair of colorfully named Syrians, Ahmet the Thin and his colleague Ahmet the Fat, eight days to settle their debts to one Zuan Priuli. If they failed, they would suffer boycott and be barred from future commerce with any Venetians until they paid up. But following the senatorial records further, I found clear evidence indicating that the pair had still not resolved the debt at the end of the following year.

Too often, the early modern Mediterranean has been portrayed in extremes, as either a zone of confrontation between incompatible cultures, or as a peacefully shared world of tolerant coexistence. The reality, however, lies somewhere in between. Throughout the 1400s, for example, the merchants of Venice did business with Mamluk subjects, making loans, arranging long-term partnerships, and buying and selling spices and cloth together. Yet although the members of these two groups knew and depended upon one another, their interactions were hardly devoid of fierce conflict and competition, as the examples above reveal.

Was this punitive approach of boycotting foreign merchants worth the harm it may have caused? Refusal to trade might seem like a powerful weapon in the mercantile arsenal, and it undoubtedly strained relations between Mamluks and Venetians. There is no clear evidence of oversight, nor of how guilt or innocence were determined, nor any indication of how abuse of this system of individual embargo might have been curtailed. It stands to reason that the Venetians might have even exploited the system to coerce Arab merchants into sales that they did not want to make. Presumably, the Venetians were just as capable of committing fraud or failing to uphold their part of a bargain as their Syrian and Egyptian counterparts. If asked, the Venetians’ Muslim business partners would have perhaps offered up a quite different version of events than those contained in the governmental material at the Archivio di Stato.

Studying these records of boycotts and other disputes over material goods has effectively changed the way that I approach my subject. Over the course of my research, I have come to recognize that when studying cross-cultural interactions like those between Venice and Cairo it is necessary to consider a variety of points of contact, including both diplomacy and commerce, at as many different levels of the social ladder as possible. Looking beyond the layers of diplomatic rhetoric contained in the records of ambassadorial missions, for instance, I have sought to identify some of the ways in which gifts fostered communication between the leaders of Venice and Cairo. But by the same token, in exploring how subjects of those two regimes traded and did business with one another, I hope to shed more light on the quotidian realities of the relationship. Muslim and Christian merchants in the major marketplaces of Alexandria, Damascus, and Beirut negotiated commercial arrangements with great frequency in this period, yet it is quite clear from the records in the Venetian archives that their interactions were not without friction. That is to say, members of the two groups did cooperate in trading silks, spices, and other precious commodities, but they also betrayed and sought to take advantage of one another at every turn.