Indigenous history is everywhere, and yet too often overlooked or ignored. In Los Angeles, a coalition of academics, archaeologists, activists, and members of local indigenous communities, is working to create a digital storymapping project that “aims to uncover and highlight the multiple layers of indigenous Los Angeles.” Mapping Indigenous LA is exemplary in its privileging of indigenous knowledge and protocol, as well as in its attention to documenting the presence of Southern California’s original inhabitants as well as diasporic indigenous communities. AHA Today spoke to professor Mishuana Goeman, co-principal investigator of the project, for more on this effort.

Can you please describe what Mapping Indigenous LA is and the kinds of initiatives/projects it’s currently involved in?
Mapping Indigenous LA (MILA) is a collaborative, storymapping project between UCLA researchers, community organizations, and local indigenous communities that seeks to raise consciousness and knowledge about the multiple layers of indigenous Los Angeles. We follow the communities’ lead on how they would like to speak about the ways they have made home in the Los Angeles basin. Sometimes this requires representing stories that have vertical depth, such as with the Gabrielino/Tongva and Tataviam in rethinking the geographies through time in relation to place. 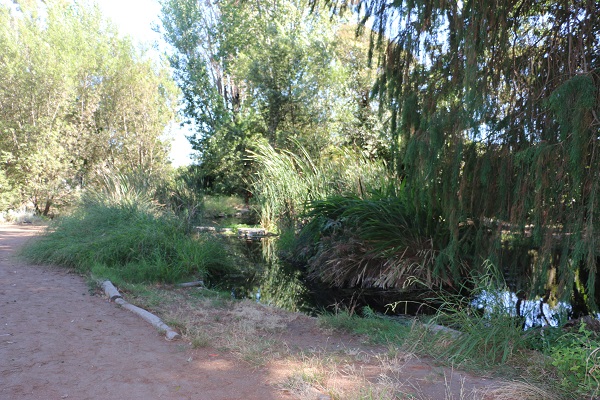 For those who have come to Los Angeles in the last century or so, it requires a horizontal approach that speaks to all the other indigenous communities across the landscape. These digital maps are great because they facilitate self-representation, are updatable, and provide an easy guide to a city that is often all too difficult to navigate. Last, but certainly not least, MILA enables communities to learn about each other in this vast space. In the near future, we will have maps in which the Gabrielino/Tongva and Tataviam people tell their own, very important stories as first peoples of what is now called Los Angeles!

How did you come to conceptualize Mapping Indigenous LA? What sort of institutional and communal support has the project received along the way?
Maylei Blackwell and I were in discussion about indigenous communities in LA one day after I returned from a trip to Catalina Island (off the coast of California) at the Pimu Catalina Island Archaeological Field School directed by Wendy Teeter (who would become our co-PI), Desiree Martinez (Gabrielino/Tongva), and Karimah Kennedy-Richardson. The multi-layered beauty and history of Pimu (known in English as Catalina Island) struck me. We have so many indigenous communities in LA and many newly arrived communities don’t know that history. This is largely a result of widely held misconceptions about the first peoples here as being extinct.

Maylei, who is working with indigenous migrants from Latin America, also spoke of wanting a space for people to understand each other. We were having these conversations at the university and learning so much from each other. When the Institute of American Cultures announced the seed grant we applied for, we pulled in our wonderful Chamorro colleague and Pacific historian Keith Camacho to work on creating a digital space for those conversations to begin occurring. Now we are in stage two in which we are developing our maps and extending our community reach.

Your project website explains that your team “invited community members to collaborate in the design” and that the project “came to agreement about protocols” with these “community scholars and knowledge producers.” Can you say more about this? For example, what were the protocols that were agreed upon and what was the negotiation process like? Do you have any advice for other historians looking to embark on similarly publicly minded and engaged digital projects?
Indigenous protocol requires that we acknowledge the history, survival, life, and futures of those whose lands we live and learn on. We begin with the Gabrielino/Tongva and one of their sacred places closest to UCLA, Kuruvungna Springs. The nonprofit Gabrielino/Tongva Springs Foundation manages the site and provides learning opportunities, including a cultural center.

From there we have tried to be very open in welcoming different perspectives. For instance, we decided that there would not be one authoritative voice but rather many contributing voices who have various relationships to each other and the land we are on. We also actively acknowledge that people have always shared places and ascribed different meanings to those places. Our protocol was to enable learning through multi-layered meanings of place. These differing opinions around land, people, and relationships lead to great conversations and new understandings. The capacity for multiple overlap on the maps allows for those varied perspectives, through various communities and through time. Most importantly this process opens important and new conversations and insights.

As an example, our LA watermap shows how waterways change and thus come to have multiple meanings across differing communities. Natural and manmade changes to the Los Angeles River have historically altered the way people interact with the landscape and the natural resources available. So in this map, and in the Tongva Perspectives map (forthcoming Summer 2016), we consider not just the human, but the nonhuman as a vital part of thinking through indigenous geographies as well as their futurity and resiliency. It takes longer to do these kinds of maps because we collaborate with community, rather than use census data or collect human statistics (which we also use), but in doing so the stories begin to connect us to each other.

While that sounds smoother than it is, I think our number one goal has to been to listen and work with the various communities who often have very different desires. We had to let go of some early ideas and timelines because they did not suit the communities and organizations. Technology issues also come into play. With much of the hacking targeted at university systems, we were unable to code new designs informed by indigenous aesthetics as we originally wanted. 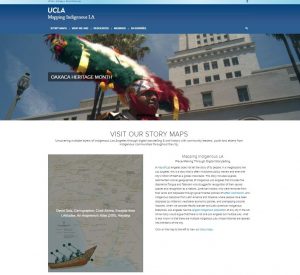 Mapping Indigenous LA is a digital storymapping project that “aims to uncover and highlight the multiple layers of indigenous Los Angeles.”

What is the level of participation and collaboration between the community researchers and the professional academics on the team? What are the rewards and challenges of this sort of collaboration, both for you as well as the community scholars?
It comes down to negotiating expectations. Community people and organizations have very different schedules than academics. We tend to get bogged down around grading time or our grants carry deadlines. This can be a challenge when you are working with the community to approve maps or awaiting permissions or feedback. Allison Fisher-Olson and I have worked on one map on Gabrielino/Tongva history for over two years now.

Right now, we are tracking down permissions for visual components proposed by Craig Torres, a Tongva educator. We take permissions very seriously, as giving credit where due is important. We also take ethical concerns into account when seeking permissions. Photos for a pow-wow map have been difficult, for example, since they involve many individuals who may feel differently about having their regalia photographed. My student working on a local pow-wow map has great pictures, but we talked through the fact that even though faces were not attached to regalia, people could still be identified through their regalia. The IRB does not require this level of accountability, but as a community of indigenous researchers we thought it best to be careful, especially as so many indigenous designs are stolen.

Your project is interesting in that not only does it include story maps about the continued presence of indigenous people, such as the Tongva and Tataviam, in Los Angeles, but also the Pacific Islander and Latin American indigenous diasporas, some of whom are more recent inhabitants of the land. What can one learn from looking at the histories and stories of these different groups of indigenous peoples together? How is indigeneity as a concept being reworked in LA?
So I thought about this question a lot and these came as I attended Native American and Indigenous Studies Association 2016 meetings in Hawaii. These relationships between tribal communities are not new, nor are the migrations between the modern geographic borders within Latin America and the United States. There have always been stories. Jim Enote recently brought an amazing exhibit to the Fowler Museum at UCLA entitled A:shiwi A:wan Ulohnanne: The Zuni World in which artists depicted this relationship of travel between what is now the United States and Mexico. The Gabrielino/Tongva also have much in common with Pacific Islanders as each share, live, and form communities on the Pacific.

Indigeneity should not be a collapsing category that erases differences, so we are not reworking Indigeneity, so much as reaffirming our relationships to each other that existed before borders and Westphalian nation-states. We are reframing the lens and returning to older processes of organizing. Even those of us from tribal communities who have not met before try to practice acting in accordance with principles that do not racialize and define how we should see difference and assign value. In my work, I use the term (re)mapping to mean not so much a nostalgic return that does not recognize the power issues in place, but to (re)map based on using traditional relationships and interactions to encourage our current relationships to each other to exist in more harmonious and powerful ways.

What does the future look like for the project?
We will be adding more maps and designing educational curriculum over the summer. Also, through this process some archival elements have come forward. We are working with people and organizations to maintain control over their materials and its uses, while looking to the UCLA library for assistance. Since UCLA is public, we have to be cognizant that not all knowledge should be shared—a long history of Indian-white relationships makes that clear to us. We want to improve our relationships in the UC to tribal communities and uphold our public mission not just to settler or arrivant populations, but especially to those first peoples whose lands we learn and practice our research on.

At the technological level, we are hoping to gain funding to develop a mobile application where by using GPS location you can pull up numerous sites and histories of indigenous Los Angeles as you are walking! Our GIS person, Dean Olsen, and our researcher Allison Fischer-Olson, as well as Brenda Nichols, a PhD candidate in Chicano studies at UCLA, will co-collaborate on a chapter for a book on looking at ESRI and resiliency in mapping. It is exciting that this project has provided opportunities at many levels. We will also employ grad students from education to work with community members this summer to facilitate a workshop with K–12 teachers that will provide alternative material to the mission system. MILA is able to move in so many directions that it fosters the conversation we set out to have happen with the first Institute of American Cultures Grant.

Any additional thoughts?
We invite participation or suggestions. One thing we have learned from the start of this process is that this history and place-making process in Los Angeles has so much to offer and that there are so many approaches! There are so many storymaps to be made!

Mishuana Goeman, Tonawanda Band of Seneca, is associate professor and vice chair of the Gender Studies Department at the University of California, Los Angeles. Her most recent book is titled Mark My Words: Native Women Mapping Our Nations (2013). She has a chapter forthcoming in Critically Sovereign: Indigenous Gender, Sexuality, and Feminist Studies, ed. Joanne Barker, Duke University Press (2016).