This is the final post in a series by Erin Holmes, one of this year’s AHA Today blog contest winners. Her posts “read” buildings and plantation landscapes across Virginia, South Carolina, and Barbados as historical documents. Previous Posts include: Visiting the Past and the Places in Between: Buildings and Landscapes as Historical Documents, Change over Time Written in the Historic Architecture of Barbados, and The Other Drayton Hall: South Carolina Plantation Architecture in the Documentary Record.

George Washington wrote everything down. He wrote so much, in fact, that the George Washington Papers Project, begun in 1968 to transcribe, annotate, and publish the complete papers of the first president of the United States, is on track to finish the projected 90-volume series in 2023. For a historian of the 18th century, this is a little overwhelming. The records encompass not only his military and political papers, but his household accounts and records of farm management. For a historian who studies the architecture of Mount Vernon, the papers include important details about Washington’s transformation of Mount Vernon from the house built by his father in 1735, to his own two-story plantation house in the late 1750s, and finally into the mansion he lived in briefly after the Revolutionary War and again after his presidency. For a historian of slavery, the documentary record provides critical insights about the daily lives of the many enslaved African Americans owned by George and Martha Washington. 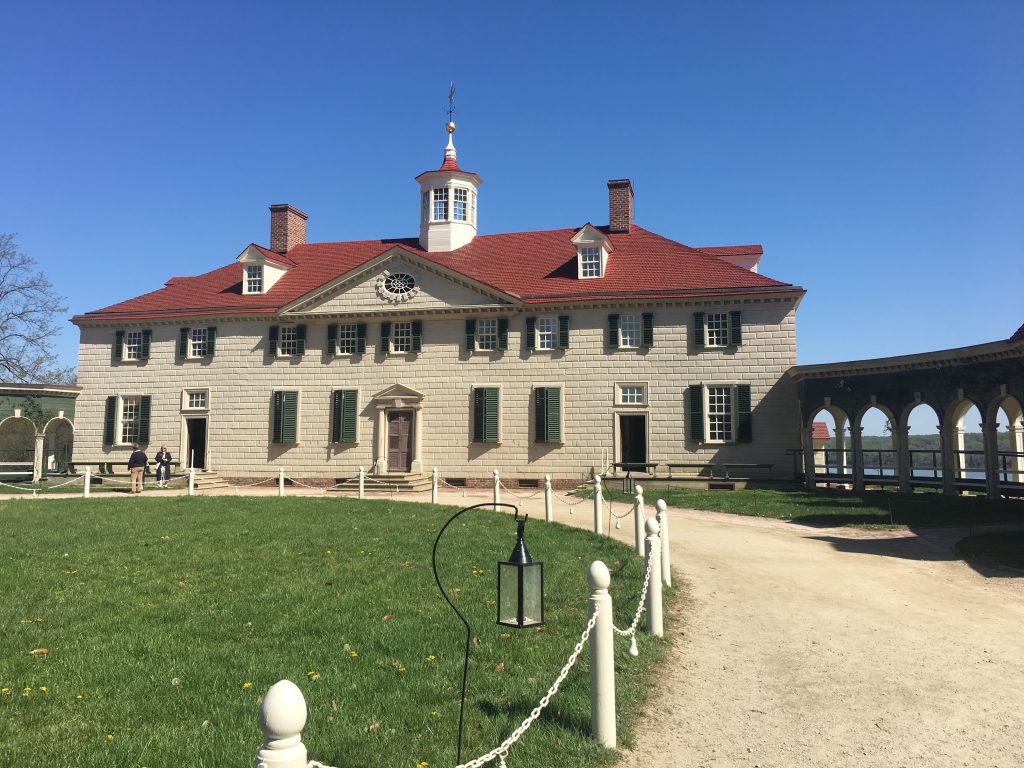 Nonetheless, there are questions—about the house, the landscape, and the experiences of the people who lived there, especially those who didn’t write things down or have their writings preserved—that still cannot be answered, or answered in full, by the documentary record alone. For this, it’s important to look to architectural reports and archaeology. Because of this, one early morning this spring, I found myself climbing through the floorboards on the second story to follow Thomas Reinhart, director of architecture at George Washington’s Mount Vernon, into the ceiling over Washington’s New Room. As we crawled along the beams, he pointed out distinctive timber frames and the remnants of earlier restoration work, as well as the wire mesh reinforcing the ornate plaster ceiling below. When we reached the edge of the ceiling, he pointed to the gap—much larger than that between the other rooms—that might indicate the presence of the door to the rumored closet that had appeared in many a digital rendering, but nowhere in the documents. For the next week, that closet became my obsession.

A “closet” was something different in the 18th century. Rather than a shallow storage space, it was simply the smallest (usually) and most private of rooms, a space where the elite white men of the 18th century could sequester themselves with books, tobacco, and alcohol when they needed some quiet time away from managing the lives of everyone (poor, female, or non-white) around them. They’re elusive spaces, though, because like most hidey holes, they were not often discussed. Mount Vernon’s closets (there were supposedly two of them, which fits the 18th-century aesthetic need for symmetry) are significant for a discussion of slavery on that plantation because they supposedly—again, with no documentary sources to confirm—were topped by roofs onto which someone could walk, allowing them to monitor activity around the house.

Tom and I—within hours of each other—uncovered the single reference to the closets in the documentary record. John Patterson, Washington’s carpenter/builder, was in the midst of construction when he penned a letter to the 26-year-old Washington on August 13, 1758. He wrote, “I have got the outside of the House finishd, the Closets excepted, & that by not having plank,” telling later architectural historians that these closets extended beyond the wall of the house, making them clearly separate spaces large enough for a person to occupy rather than the shallow interior space associated with the usual closet. While there is no documentary reference to the walk-out roof, there is possibly a closed-up door in the interior wall on the other side of the house that would have provided such access. Unfortunately, because Washington’s later construction of the New Room and his study, there is no archaeological evidence—but the mansion itself may hold more clues. 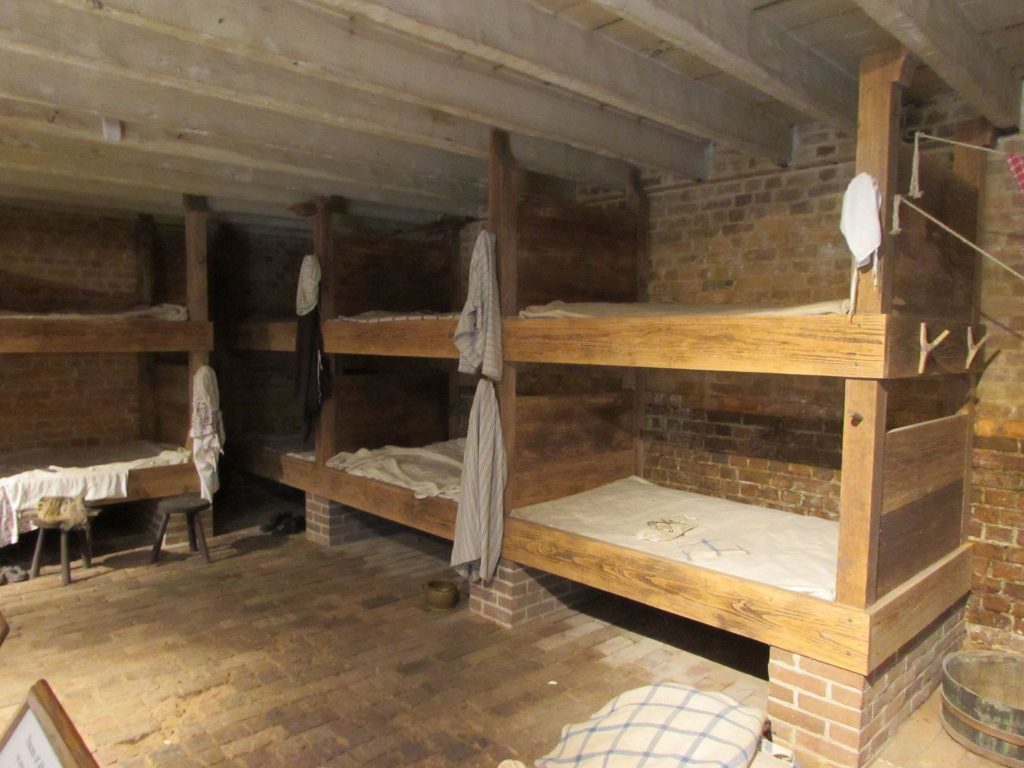 Slave quarters at Mount Vernon; in 1787, Washington replaced the “House for Families” inhabited by slaves working on the plantation with men’s and women’s quarters on either side of the greenhouse on the estate. Kritika Agarwal

Elsewhere on the Mount Vernon grounds, archaeological excavations are digging into the lives of the enslaved people who worked there throughout its history—and the more intimate details of the Washingtons’ lives. The South Grove Midden excavation has been going on for several years now, and its location close to the mansion means it receives a number of visitors each day. One of the notable finds in that excavation was the seal from a wine bottle belonging to John Posey, a nearby planter, who was George’s companion for much of the drinking and gambling associated with the planter class. Within a decade of Washington’s marriage to Martha Dandridge Custis, however, Washington had called in Posey’s debts (and was gambling less). The seal would have been attached to a wine bottle, likely brought by Posey to dinner or sent as a gift. The midden (essentially an 18th-century trash pit) is full of similar household trash including single buttons, broken china, and the remains of butchered animals.

In contrast to the South Grove Midden, which is explicitly associated with the mansion, the cemetery for the enslaved is at some distance in a small clearing. Washington made no mention of the burial ground in his papers, despite choosing a nearby location for his own tomb. Today, those burial sites are within sight of one another and on a sunny afternoon this spring (too beautiful to stay inside), I made my way over. Luke Pecoraro, Mount Vernon’s director of archaeology, was leading a tour nearby, but Joe Downer, the site crew chief, was finishing the day’s excavations, and stopped to talk to me about their research agenda for the summer. Because the cemetery doesn’t appear in the documentary record until the 19th century, it is unclear just how large it actually is; thus, they have three main questions: What are the boundaries? How many people are buried there? And how are the graves arranged? Without excavating the graves themselves, they’re still able to learn a great deal about the people who were buried there. Small artifacts, likely things dropped by visitors or mourners, reveal connections between the house and cemetery: a small glass disk impressed with an image of coral that would have been set in brass to close a shirt (working much like modern cufflinks) is a match to another glass disk found in the previous excavation of the House for Families. 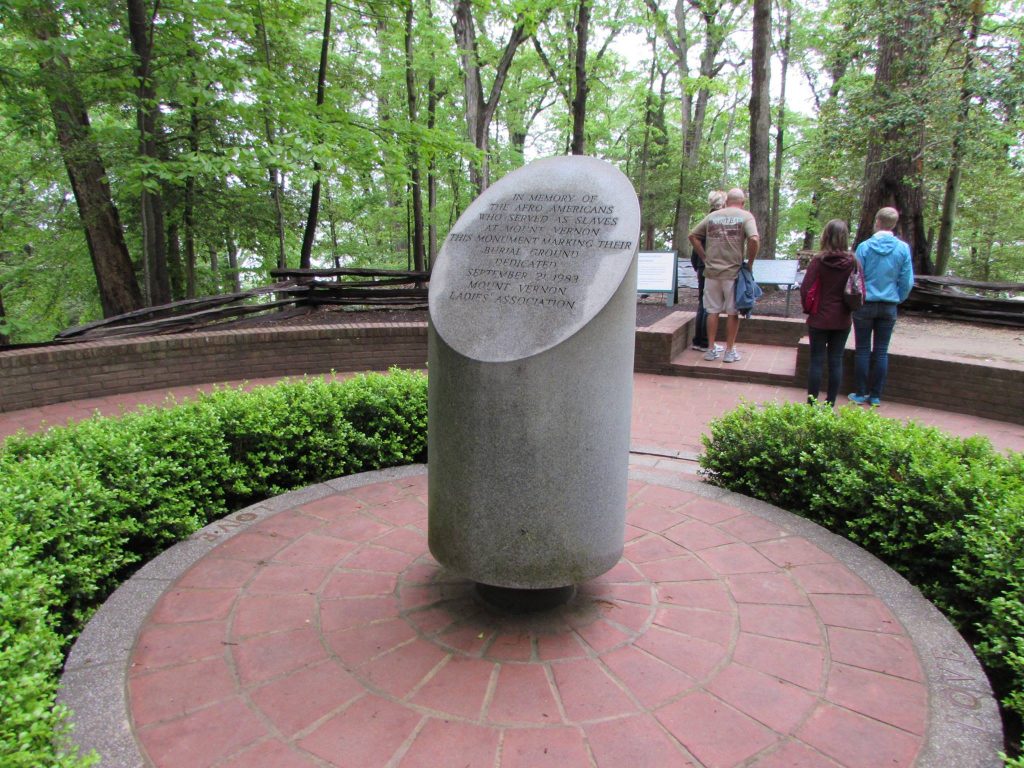 The Slave Memorial at Mount Vernon; the slave cemetery can be seen in the background. In 1983, this monument to the enslaved African Americans who worked at Mount Vernon replaced an earlier one from 1929. The later monument’s placement may have impacted the cemetery it was meant to commemorate. Kritika Agarwal

When I compare my experiences working on other historic sites in Barbados, South Carolina, and Virginia, Mount Vernon stands out because it has nearly complete documentary, architectural, and archaeological records. At Sunbury, the meager documentary record and absent archaeology leave the building to stand on its own (pun intended), while Thomas Drayton’s lost landscape at Magnolia Plantation exists only in the documentary and (heretofore unexplored) archaeological record. While I’ve yet to find a document detailing when, why, or how the changes were made at Sunbury, I can study the architecture to understand how those changes affected the people who lived there. At Drayton’s plantation, I can use the documentary record to ascertain the name of every enslaved person he owned, as well as their age and gender, but without archaeological research or a more detailed description of the house, I can only speak generally to where they worked, slept, and raised their families. At Mount Vernon, the documentary record illuminates the personalities of some of the enslaved men and women who worked there, the architecture of the house reveals what daily life was like and how it changed, and the archaeology reveals the strength and continuity of the enslaved community. Places like Mount Vernon are rare, but studying that single place through all these lenses has allowed me to ask more probing questions about the house and the people who lived and worked in it, and actually expect to find answers. In turn, those new questions have led me to reassess how I approach other sites—because you can’t find the answer you’re looking for unless you know the right question to ask.