Hero, Villain, or Anti-Hero? Archival Records and Dealing with the Contradictions of the Past

I was wrapping up the second to last chapter of my MA thesis when I received a call from a local historian from Holly Springs, Mississippi. During our conversation, my colleague read out an excerpt from a short biographical sketch about Dr. William M. Compton that she’d found in a local history book published in the 1930s. What struck me about the sketch was that it named Compton as the founder and “Grand Cyclops” of Marshall County’s chapter of the Ku Klux Klan. The implications of this finding left me stunned. The central figure of my research—a man who risked his reputation in support of racial reconciliation—had been a leading member of the Klan, a group dedicated to protecting white supremacy by any means necessary. How was I to treat such a person? 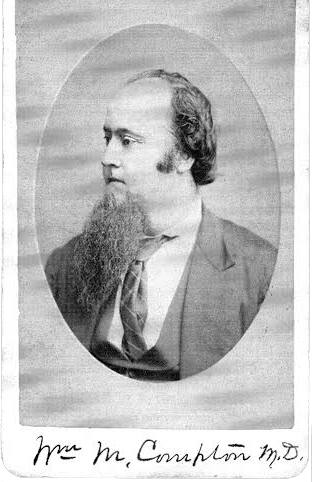 Dr. William M. Compton. Reprinted with permission from the Journal of the Mississippi Medical Association.

As I have written previously, the limited archival record on Compton taught me how to formulate effective research questions and make sense of Reconstruction’s complex and endlessly evolving political landscape. The revelation that Compton had been a Klansman also taught me how to think more critically about the complexity of individual actions in the past. In this case I had to reconsider what I previously thought I knew about white southern Republicans. The prevailing view of “scalawags” among scholars tends to draw a straight ideological line from their antebellum affiliation with the Whigs to their postwar evolution as Republicans. The sources on Compton suggested a more circuitous journey—one that took two steps back before moving forward.

Compton’s defection to the Republican Party in 1869 was quite the coup in Mississippi politics. He had been a leading voice among the state’s race-baiting conservatives since returning home from the Confederate Army, and he was such a belligerent obstructionist at the 1868 state constitutional convention that his peers censured and nearly ejected him from the body. Disgusted with the rise of black political power and the disenfranchisement of former Confederates, Compton helped reconstitute the flailing Democratic Party and helped organize the Klan in his hometown. The ensuing terror campaign prevented the ratification of a state constitution that included an expansion of African American civil rights, and by the next year many considered Compton to be the Democrat’s best candidate for governor.

In her recent history of the Klan, Elaine Frantz Parsons pointed out that by 1869, when many white southern elites began to regain more conventional roles in government, support for the Klan began to weaken. Compton, a prewar slaveholder and successful postwar businessman, was no different. That autumn, he began campaigning for the Republican Party and decrying the Klan’s violence. His former allies were stunned. “Surely the angels in their fall could not have met a more damnable end, than Dr. Compton, [who] by his affiliation with the present radical party,” raged the Weekly Panola Star, “. . . has sold his birthright for a mess of potage.”1 And fall he did—right into the superintendent’s office of Mississippi’s largest public institution, the state lunatic asylum.

It is easy to read Compton’s defection as a crass and opportunistic move. As the asylum’s new superintendent, he enjoyed the one of the largest salaries among the state’s public officials and a prestigious position within the state’s medical profession. However, his turn to “the present radical party” was not entirely inconsistent with his previous ideological positions. Prior to the war, Compton was a prominent member of the last generation of prewar southern Whigs—men who were open to reform and weary of the “old fogyism” of the fathers and grandfathers.2 While there is no evidence that he opposed secession, his closest political allies (like James Lusk Alcorn) did. After the war he railed against immediate racial equality, while working hard to professionalize and expand the state medical system, and amend Mississippi’s state constitution to protect the property rights of women.

Compton’s move to Republicanism was definitely self-serving, but it was not hypocritical or uncommon. Once universal male suffrage became a fact in 1870, “scalawags” like Compton moved away from a Democratic Party they had never felt fully comfortable with and found a home within the conservative wing of the Republican Party. And one shouldn’t interpret this move as a rejection of racism, because Compton still continued to believe that white men were most fit to serve as the nation’s masters. But as Ibram X. Kendi’s recent history of American racism illustrates, people (even Frederick Douglass or William Lloyd Garrison) spent their lives sliding between their most racist and antiracist selves.

The “messiness” of Compton’s life—his role in the Klan, his gradual embrace of African American civil rights, his support of women’s property rights, and his patriarchal treatment of his staff and patients—reflects the “messiness” of Reconstruction-era Mississippi. Trying to forge a coherent narrative out of a limited archival record about a life full of seemingly irreconcilable inconsistencies taught me how to appreciate this fact. I learned that the people of the past rarely acted the way we expect them to in hindsight.

Initially I wanted Compton to be my story’s hero—a progressive man who gave up everything in the name of racial reconciliation. Instead, I found him to be a much more complicated and fascinating person. He could be admirable in one instance and detestable in the next. He was someone who certainly changed over time, but also retained many of his old prejudices. His rivals used his life’s inconsistencies to label him an opportunist or fair-weather ally. Encountering Compton in the archives allowed me to better understand these apparent contradictions in an objective and empathetic (rather than sympathetic) way.