Far from the Harlem Crowd: Rediscovering the Work and Life of Augusta Savage in Saugerties, New York

In 1945, Augusta Savage, a sculptor and a key figure in the Harlem Renaissance, traded the hustle of Harlem for a secluded house, 100 miles north, tucked at the end of a dirt drive in Saugerties, New York. For a long time, her story was said to end there in a retreat from society and the Harlem art world—a narrative that ignored her ongoing work and active social life in her adopted town. 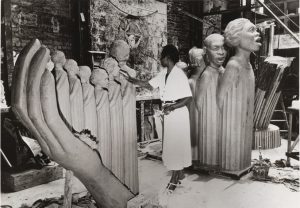 Savage’s story has been prone to omission, in part due to the little she left behind. Many of her pieces were lost because she could not afford to have them bronzed; the World’s Fair renamed and claimed authority over one of her most notable pieces; and her life away from New York City was eclipsed by her contributions to the Harlem Renaissance. Only now are historians and writers, such as Harvard University professor Jill Lepore and New York Times columnist Eve Kahn, taking an interest in the last 15 years of Savage’s life. While her contribution to Harlem was vital, Savage and her art were more than just about that time and place. Her years in Saugerties are, in fact, necessary to any full account of Savage’s life as an artist. Over the past two decades now, local historians have been restoring Savage’s house in Saugerties to the state it was when she was living there in order to bring more attention to her life and work beyond Harlem. The house now functions as an exhibit space highlighting her time in the small town, the works she produced there, and the society she found among neighbors and friends who visited from New York City.

Born in 1892, Savage had shown talent crafting barnyard animals with mud near her Florida home as a girl. She married at 15, became a mother the next year, and then widowed before she moved to New York to study art in 1921 at Cooper Union. Savage associated with the many black artists coming to New York in the 1920s, hosting parties and friends even as she also housed her father and other family members. As Lepore described in her recent book, Joe Gould’s Teeth (2016), “That tiny apartment was the heart of the Harlem Renaissance, a gathering place for artists and for poets like Claude McCay and writers like Dorothy West.”

Savage was a leader and educator as much as an artist in the 1930s New York. She headed the Harlem Arts Guild and the Harlem Community Arts Center, as well as mentored artists including Jacob Lawrence—work she took pride in even when she came to doubt her own artistic legacy. Later, she was commissioned to create a work for the 1939 World’s Fair in New York resulting in the 16-foot-tall installation, The Harp, one of her most well-known pieces. Savage’s work is known for its realistic depictions of African Americans including key political figures such as W.E.B. Du Bois and regular folks around Harlem.

As Lepore and others have found, however, Savage left precious little recorded history of her later life—any letters and writings seemed to have been purposefully expunged, likely by Savage herself. Nothing has been handed down that says for certain why she traded Harlem for Saugerties, whether it was the decade-long harassment at the hands of famed bohemian Joe Gould, or her run-in with the FBI—a result of navigating heady waters of communist politics in artistic circles at the time. What we do know is that she left and took up life in the rural town of Saugerties in 1945. 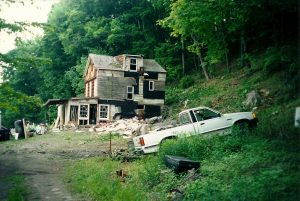 Augusta Savage’s house in Saugerties, New York, before it was renovated by Karlyn Knaust Elia, a local historian, and her partner, Richard Duncan. Photograph by Richard Duncan

Her move in 1945 marks the end of many accounts of her life. According to Romare Bearden and Harry Henderson’s A History of African American Artists—published in 1993—Savage attempted no art whatsoever in Saugerties. They admit she set up a studio but determined that she never used it. The authors claim that Savage sought “complete isolation” in Saugerties, but evidence suggests that her isolation was not quite so complete.

Savage did pursue a quieter life in Ulster County. She raised chickens on her property and used kerosene for light but also maintained an active social life and continued to sculpt and paint in a studio she kept in a small, repurposed chicken coop on the property. Lepore recounts stories of late night parties with friends bussed in from Harlem while locals also recall poetry readings that she gave at Stroomzeit, the riverfront estate of Herman Knaust, a local businessman who hired Savage to tend lab mice in his cancer research laboratory. Savage would recite the sonnets of William Shakespeare from memory during those nights, according to Knaust’s granddaughter, Karlyn Knaust Elia, a local historian and advocate of historic preservation. 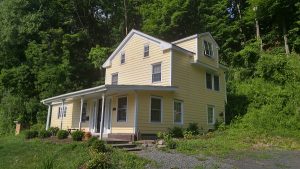 Augusta Savage’s house in Saugerties, New York. The house has only recently been restored to the condition it was in when Savage lived there. The house now functions as an exhibit space highlighting her time in the small town. Photograph by Richard Duncan

Knaust relayed stories to his family about the famous Harlem artist and her time in Saugerties. When Savage’s house came on the market in 1999, Knaust Elia’s partner, Richard Duncan, opted to purchase it and, together with Knaust Elia, spent nearly 16 years restoring it. Knaust Elia noted that many of Savage’s works of the period were gifts or commissioned pieces that remain in private collections. In 2000, she curated an exhibit, “Savage in Saugerties,” at the local historical society featuring nine of Savage’s works from that period. Since then, Knaust Elia has photographed and documented them in her personal collection.

The house is just now in the condition Knaust Elia and Duncan envisioned, resembling the life Savage brought there with pictures of her Saugerties-era works and artifacts from her time there: furniture, dishes, pottery, her typewriter, and books including a copy of James Weldon Johnson’s St. Peter Relates an Incident inscribed to her by the author. Johnson’s poem “Lift Every Voice and Sing,” from that collection, was the inspiration for The Harp.

The Augusta Savage House and Studio retain the isolated charm that attracted the popular sculptor to Saugerties 70 years ago. With further renovations and a website in the works, Knaust Elia and Duncan hope to bring more attention to the remote landmark. They are turning their efforts next to the small outbuilding Savage used as her studio and then finally to the barn, which will eventually provide space for an artist-in-residence program, again bringing creation to the space that saw one of the great artists of the 20th century at her craft. 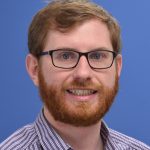 Eric Fitzsimmons is a copy editor at Living Beyond Breast Cancer and freelance writer based in Philadelphia. Find Eric on Twitter @efitzsimmons08. Sarah E. Elia is a lecturer at the Haggerty English Language Program at the State University of New York at New Paltz, president of New York State Teachers of English to Speakers of other Languages, and the daughter of Karlyn Knaust Elia.