Cultural Encounters and Material Exchanges in the Venetian Archives

One of the strangest and most fascinating source encounters I have experienced so far while working in the Venetian archives concerns the role of food in the records of a set of diplomatic missions to Cairo. In one case, in the early morning of December 17, 1489, at the citadel of Cairo, Pietro Diedo, the Venetian ambassador to Egypt, delivered an assortment of gifts to the Mamluk sultan Qaytbay. The ambassador’s presents included precious textiles, costly furs, and, surprisingly, dozens of wheels of cheese. Each item conveyed a particular message, demonstrated the Venetians’ concerted effort to communicate their relationship with Egypt, and proved pivotal to the ambassador’s successful completion of his mission to negotiate a new treaty between the Mamluks and the Republic of San Marco. The cheese, at first glance a seemingly bizarre present for a sultan, in fact represented a serious attempt to remind Qaytbay of how beneficial his relationship with the Venetians could be in terms of pleasing the Egyptian palate. Italian cheeses had, over generations, become a popular, even indispensable, food among Egypt’s elite. This, in other words, was dairy diplomacy, and an effort to stress the deep culinary, cultural, and economic links between Venice and Cairo that had developed through generations of mercantile exchange. 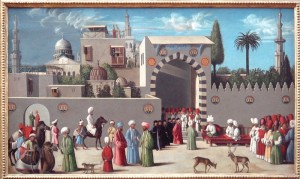 As an advanced doctoral student in the Department of History at Syracuse University, I have had numerous discoveries in the archives that I would like to share with AHA Today readers this summer. My dissertation, which focuses on material culture and gift exchange between Muslims and Christians in the early modern Mediterranean, has taken me to Venice, where I have passed nine months doing research at the Archivio di Stato di Venezia, the Biblioteca Nazionale Marciana, and the Biblioteca del Museo Correr. During this time, I have encountered various documents narrating instances of cross-cultural interaction mediated through material goods. These lively and often unusual vignettes reveal much about how Venetian merchants and officials, together with their Muslim counterparts, viewed, and negotiated with, one another. Often, my research has driven me to investigate how these historical actors chose the objects that they gave one another, and also to inquire into why the authors of my sources presented their information in the ways that they did. In my dissertation, I argue that gifts, extortions, and bribes constituted an unwritten and often mutually beneficial diplomatic-commercial protocol that enabled the members of these two very different societies to constantly renegotiate their relationship without going to war.

My blog series this summer will consider just a few of the many important documents that describe interactions between Christians and Muslims in the history of early modern Venice. I plan to use this series as a way to showcase some of the most striking examples of relations between the cultures who did business within the Republic of Venice’s vast Mediterranean commercial empire. The documents that I have found over the course of my dissertation research have changed how I think about the meaning of religious difference and the role of trade in breaking down boundaries in this period. Some examples contained in these sources include a description of a fight in the Venetian Senate over a crateful of presents from the sultan of Egypt, a letter of greeting to the doge from the Shah of Persia, demands for Venetian candy from an Ottoman ruler on the eve of a great battle, and the case of a live pig given by a Mamluk ruler to a group of European guests.

Using my experiences with these sources, I aim to show that it makes little sense to regard the inhabitants of the Mediterranean in this era as having been clearly divided by either cultural or political barriers, as is often assumed to have been the case by pundits and Hollywood. In contrast to such commonplace misconceptions, these documents reveal a great degree of permeability between different societies that was facilitated by trade and gift giving practices. Through color images of surviving objects and an accompanying analysis of the rich descriptions left behind in archival records, this blog series will highlight the role of material exchange in linking the cultures that inhabited the Mediterranean in the 15th and 16th centuries.

I would like to extend my sincere gratitude to the Gladys Krieble Delmas Foundation for their generous support in funding my project. I would also like to thank the staff at the Archivio di Stato di Venezia, the Biblioteca Nazionale Marciana, the Biblioteca del Museo Correr, and the Fondazione Giorgio Cini for their help in conducting my research. Finally, I would like to offer a special note of gratitude to my advisor, Professor Dennis Romano, without whose tireless assistance and guidance none of my work would be possible.