Conflict in Africa: The Historical Roots of Current Problems

“The purpose of foreign policy is to promote national self-interest, not the well-being of others.” This provocative statement from the audience sparked a spirited discussion at a Washington History Seminar in April. In response, I argued that nations must embrace a definition of self-interest that is informed by historical and cultural understanding.

Foreign intervention in Africa during the periods of decolonization and the Cold War failed miserably in that regard—as demonstrated in the Congo (1960–65), Angola (1975–92), and Chad (1968–84). Outside powers bolstered regimes that perpetrated injustice and inequality, stimulating conflicts that continue to threaten global security. Wrong-headed policies from this era offer cautionary tales of the disastrous consequences of policies that ignore history. 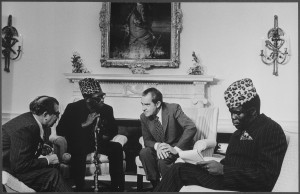 President Nixon meets with President Mobutu Seko of Zaire (now known as the Democratic Republic of Congo) in the Oval Office in October 1973. Source: Wikimedia Commons

I opened my presentation with a stereotype. For many outsiders, “Africa” evokes images of a continent in crisis, riddled with war and corruption, imploding from disease and starvation. African people are regularly blamed for their plight—they are presumed to be intolerant of ethnic and religious differences and unwilling or unable to govern themselves. I argued that these simplistic misconceptions are not only inaccurate, but they are also dangerous because they mask the complex causes of contemporary crises, such as those in the Democratic Republic of Congo, Libya, and Sudan, and diminish the chances of resolving them.

When the historical roots are examined, it is clear that much of Africa’s current predicaments of poverty, corruption, and violent conflicts are not solely the result of African decisions, but are also the consequence of foreign intrusion into African affairs. Many of today’s challenges are the outcome of colonial political and economic practices, Cold War alliances, and attempts by outsiders to influence African political and economic systems during the decolonization and post-independence periods. Although local issues sparked numerous recent disputes, external political and military interventions altered their dynamics and rendered them more lethal.

My presentation to the Washington History Seminar explored some of these issues using case studies from my book, Foreign Intervention in Africa: From the Cold War to the War on Terror (2013). Intended for historians, policymakers, humanitarian and human rights workers, students, and the general reading public, the book provides a new, historically rooted framework for thinking about foreign political and military intervention, its purposes, and its consequences. The majority of case studies are taken from the overlapping periods of decolonization (1956–75) and the Cold War (1945–91), when imperial and Cold War powers vied to control the decolonization process. The final chapter offers an overview of the post-Cold War period, which is the subject of a second book project.

At the seminar, I noted that when colonialism in Africa collapsed after World War II, Cold War powers jockeyed with imperial powers to control the decolonization process. During a period characterized by political competition, economic rivalry, and military friction between the United States and the Soviet Union, the United States hoped to replace the European imperial powers as the dominant external force in Africa. Washington wavered between support for its European allies—all members of NATO—and moderate African nationalists, whom it hoped would keep radical nationalism and communism at bay. Although US-Africa policy changed over time, all presidential administrations, whether Democratic or Republican, opposed political movements that the United States could not control. The maintenance of good relations with European allies and the containment of radicalism remained paramount. Radical nationalism was frequently confused with communism—or viewed as an equal threat to Western political and economic interests. Fear of communism—real or imagined—led Washington to support many unsavory dictatorships, such as those in Zaire, Somalia, and apartheid South Africa. 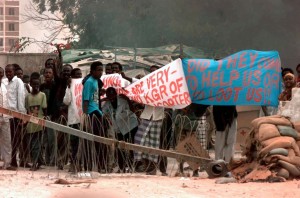 A February 1993 photo showing protestors outside the US embassy in Mogadishu, Somalia’s capital. They appear to be protesting the presence of US-led coalition forces in the country. Source: Wikimedia Commons

The collapse of the Soviet Union in 1991 brought the Cold War to an end. Free market austerity policies imposed by Western-dominated international financial institutions and weak postcolonial states contributed to deadly struggles over power and resources. African dictators, no longer useful to their former patrons, were cut adrift, and African nations were left with a legacy of looted resources, massive debt, dysfunctional states, and multiple regional wars over the spoils.

This devastating situation was not solely the result of Cold War interventions. Distinctions in power and privilege and conflicts over natural resources predated the colonial period. The plundering of African riches through unequal exchange was rooted in colonial economic practices, as well as enduring ethnic and regional hierarchies established during the colonial period. Internal corruption, mismanagement, and the privileging of some groups over others had resulted in volatile societies characterized by vast disparities in wealth and power. However, the influx of weapons and money during the Cold War entrenched power differentials and rendered local conflicts more deadly. When the Cold War ended, unstable countries were flooded with leftover weapons that fueled new competition for riches and power. Years of war and repression had destroyed organized political opposition in many countries. Hence, when indigenous pro-democracy movements and rebel insurgencies ousted Cold War dictators who were no longer bolstered by foreign powers, local strongmen and neighboring states frequently moved into the power vacuum.

Since the Cold War, new justifications for foreign intervention in Africa have emerged. The Cold War paradigm has been replaced by those of the “responsibility to protect” and the “war on terror.” Some foreign governments and multilateral organizations have interceded in conflicts to protect civilian lives or to restore regional stability. However, outside powers have tended to engage selectively, choosing conflict zones that advance their own political, economic, and strategic interests, while ignoring others. International humanitarian and peacekeeping efforts have often been marred by conflicting interests that have sometimes hurt the people they intended to assist. The war on terror, like its Cold War antecedent, has increased American and European military presence on the continent, generated new external support for repressive governments, and contributed to an escalation of violence in many regions. Rather than promoting security, outside intervention has often intensified strife and undermined prospects for peace, demonstrating once again how failure to learn from the past has obscured the pitfalls of the future.

Established by the AHA in 2002, the National History Center brings historians into conversations with policymakers and other leaders to stress the importance of historical perspectives in public decision-making. Today’s author, Elizabeth Schmidt, recently presented in the NHC’s Washington History Seminar program on “Foreign Intervention in Africa during the Cold War: The Struggle for the Global South.” A video of her talk can be found here: https://www.c-span.org/video/?407579-1/foreign-intervention-africa-cold-war