Carin Berkowitz is the director of a center and fellowship program for the history of science at the Chemical Heritage Foundation. She lives in Swarthmore, Pennsylvania, and has been a member since 2014. She’s the author of the recently published Charles Bell and the Anatomy of Reform (Univ. of Chicago Press, 2015). 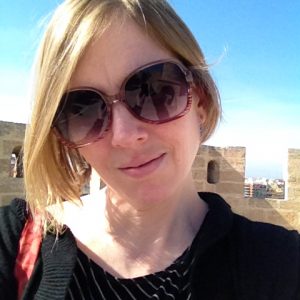 When did you first develop an interest in history?
I always say that my path in history of science is one that could be told two ways: as an accident or as a trajectory that was already in the making when I was 16. Both are true. I read historical fiction a lot growing up. Like most kids (I think??) I developed enthusiasms about particular periods. When I was 7 and 8, I read everything I could about pioneers and had a pioneer-themed birthday party. When I was 12, I did a summer program on World War II, bought tapes of the BBC’s wartime radio broadcasts, and played Axis and Allies. When I was 16, I discovered history of medicine through a summer program at Johns Hopkins. I had signed up for classes on the history of art and the history of music, but the history of music class got canceled because of low enrollment, so I was asked to select a new course on the spot. I chose a history of medicine class. I think most people in the room wanted to be doctors, but I was absolutely fascinated by William Bynum’s Science and the Practice of Medicine in the 19th Century. I went home talking about 19th-century hospitals where three women in different stages of labor could occupy the same bed, etc. I went on to be an English major as an undergraduate, so it is not as though I decided at 16 that I wanted to be a history of science professor, and I mostly went to graduate school in order to maintain my health insurance (those are the career-as-accident parts of the story), but I think I would have a hard time pinpointing the time when I developed an interest in history because it seems to me it was always there.

What projects are you currently working on?
I am happily plodding away at a few small projects at the moment, having just published a book last year. I am currently co-editing a volume on 19th-century science museums in which I have a chapter. I am also beginning little (article-length) projects on Gray’s Anatomy (the textbook, not the the series) and on 19th-century London medical lectures as intellectual property. I am not sure I know what the next book-length, decade-long, big project will be, but I am glad to feel that I have the time to explore with some shorter pieces and find the right subject for the next book.

Have your interests evolved since graduation? If so, how?
Interesting question. . . I do not think that my subject-area interests, which have always been fairly broad, have changed much; I am still particularly interested in science, medicine, pedagogy, politics, and visual culture, and in the intersections of those categories. What has changed, I think, is my interest in various forms of communication. I have discovered that I love giving talks to and writing for audiences outside the confines of my narrow sub (or sub-sub) discipline! The most fun I have had presenting my work recently was at a Science on Tap event in Philadelphia, where I spoke in a bar about my work, during Happy Hour, using a microphone that is more often used for karaoke. The place was packed, and people really listened and asked interesting questions. It was great!

Is there an article, book, movie, blog etc. that you could recommend to fellow AHA members?
There are lots, but I will mention a few that are particularly useful in a pedagogical setting. As a teacher, I regard the history of science, medicine, and technology as a subject that facilitates critical engagement with the most powerful of modern institutions, science. Books that I think serve that end by demonstrating particularly effectively how science gained its cultural authority include Dying in the City of the Blues and Drawing Blood by Keith Wailoo, The Intelligibility of Nature by Peter Dear, and Impure Science by Steven Epstein.

What do you value most about the history profession?
I think what I value most is also what challenges me the most sometimes—it is immensely interesting and often a lot of fun. My nine-year-old son asked me recently why I get paid to do what I do, and he put his finger on something I sometimes worry about, which is the social utility of my work as a professional historian at a nonprofit (and, to a very great extent, outside the classroom). But while it may be more complicated to explain, I think that it is very valuable that we as historians attempt to understand humanity and its past and to historicize very powerful modern institutions like science, medicine, and government in such a way that people feel able to engage with them critically.

Why have you continued to be a member of the AHA?
I regard the AHA as a means of having a kind of political citizenship as an historian. I think academia in general and the humanities in particular are facing times of considerable change—internal changes in what it means to be a scholar, to gain tenure, to publish, to train graduate students, to work in a field—as well as broader changes surrounding expertise, education, and the place of the humanities in public intellectual life. The AHA allows one to inform oneself about and to engage actively with those many issues through its publications or through its annual meeting.

Other than history, what are you passionate about?
My kids; they are my source of joy. And shelter animals. If I ever win the lottery, I will be writing my history books from the porch of a farm filled with dogs.