Philadelphia and the Ideal of Religious Toleration

Are societies organized around the ideal of religious tolerance superior, in some fundamental sense, to other sorts of societies? This question, one that scholars have explored with great subtlety in recent years, is not a bad question to bear in mind while walking the streets of Philadelphia. To be sure, such a walk is not likely to settle that question once and for all. But it can give a historian a good deal of exercise and a great deal of food for thought.

The present essay is intended as a prod for such a walk. It aims to provide a brief survey of some of the houses of worship in Philadelphia that are within walking distance of City Hall and shed light on the ways Philadelphia is—and is not—a city of religious tolerance. Historians who wish to lean more about churches and synagogues in Philadelphia should consult Robert W. Moss's Historic Sacred Places of Philadelphia (2005). (The book also contains beautiful photographs by Tom Crane.) Historians who want to sample some of the vast literature on the invention and development of the ideal of religious toleration might wish to consult the works of Talad Asad, William R. Hutchison, Sidney E. Mead, and Adam Sutcliffe.1

Visitors to Philadelphia sometimes hear locals boast about the contrast between the "religious toleration" that reaches back to the city's earliest days and the "religious persecutions" that mar the history of other great cities. In fact, one local organization has gone so far as to place a statue of Mary Dyer—who was martyred in Boston in 1660—within a stone's throw of Philadelphia's City Hall. Since a statue of the famously tolerant William Penn stands atop City Hall, the supposed contrast is none too subtle. Boston is supposed to be associated with persecution, Philadelphia with toleration.

There is a grain of truth in such civic boasting. There has been a good deal of tolerance and communal accord in Philadelphia's religious history. Pennsylvania, the commonwealth of which Philadelphia was once the capital, never created an actual religious establishment. Freethinkers, Jews, Roman Catholics, and Protestant "sectarians" (Baptists and Mennonites, for example) were often treated less harshly in Pennsylvania than they were in the other colonies of British North America. This history of religious tolerance has left an imprint on the city of Philadelphia.

Visitors to the Burial Ground of Christ Church, which played an important role in the history of Anglicanism in North America, will certainly see the graves of many devout Anglicans. They will, however, also see the grave of Benjamin Franklin, a man of deistic predilections, and a monument to a Jewish man named David Salisbury Franks, who was interred there in 1793.

Visitors to Philadelphia can also make their way to Rodeph Shalom, which was founded in 1795 and is said to be the first Ashkenazi congregation established in the Western Hemisphere. (The congregation of Rodeph Shalom now meets in two different buildings: the suburban building in Elkins Park and the metropolitan sanctuary about half a mile north of City Hall.) Visitors might want to consider a trip to Old Saint Joseph's Church, whose roots go back to 1733. A plaque notes that Old Saint Joseph's was for a time the only Roman Catholic church in the English-speaking world where a Roman Catholic priest could publicly celebrate the Mass without violating the law.

Religious heterogeneity continues in Philadelphia today. The city is home to a growing number of Buddhists such as those who meet at the Shambhala Meditation Center to meditate and to listen to dharma talks. It seems likely that there are now more practicing Buddhists in Philadelphia than there are practicing Quakers. And there are undoubtedly far more Muslims than Friends in the city. Visitors who are interested in the city's Muslim community might well want to walk to the building in which United Muslim Masjid meets (about seven-tenths of a mile south of City Hall). Prayer services are held there five times a day. 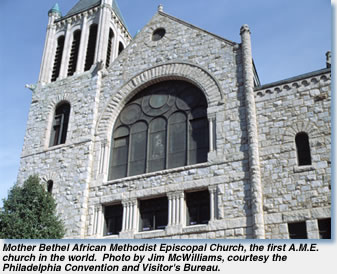 But having said all that, I must also note that describing Philadelphia as a city where religious differences have been gleefully accepted and religious confrontations have been assiduously avoided does not begin to do justice to the complexities of the city's cultural history. In 1787, the leaders of Saint George's (home of Philadelphia's nascent Methodist movement) provoked a conflict by seeking to confine black worshipers to the gallery. Richard Allen left Saint George's and eventually founded what is, arguably, the most historically important church in Philadelphia: Mother Bethel African Methodist Episcopal Church.

Another famous conflict broke out in the 1820s, when the Religious Society of Friends began to separate into two mutually hostile camps: the Hicksites and the Orthodox. (The Hicksites erected the famous Race Street Meetinghouse in 1856; that building was built, in part, to counterbalance the cachet of the Arch Street Meetinghouse, which was firmly in the control of the Orthodox party.) During the years of the Orthodox-Hicksite schism, feelings ran high: harsh words were said, nasty polemics were published, and physical confrontations occurred. Outright physical violence was, however, averted. That was not the case in the conflicts between Catholics and Protestants that broke out in the 1840s. Indeed, in May 1844 a Protestant mob burned Saint Augustine's Church to the ground. (The present church structure, built in 1847, was designed by the same man who designed the imposing Cathedral Basilica of Saints Peter and Paul, Napoleon LeBrun.)

Even in the contemporary era, there are limits to religious tolerance to be found in Philadelphia. The city has probably not yet achieved perfect religious toleration, and it almost certainly has failed to achieve full religious freedom.2 Well into the 20th century, many of Philadelphia's elite law firms and major corporations systematically discriminated against Jews. In contemporary Philadelphia, moreover, citizens occasionally make rather sweeping assertions about Islam being a "religion of hate" and about fundamentalists and Roman Catholics posing a threat to the freedoms of the American republic. In some settings, residents of Philadelphia who are not theists or who practice religions such as Vodou or Wicca still feel compelled to remain closeted.

—David Harrington Watt (Temple Univ.) is a member of the Local Arrangements Committee.

1. Talal Asad, Genealogies of Religion: Discipline and Reasons of Power in Christianity and Islam (1993); William R. Hutchison, Religious Pluralism in America: The Contentious History of a Founding Ideal (2003); Sidney E. Mead, The Lively Experiment: The Shaping of Christianity in America (1963); and Adam Sutcliffe, Judaism and Enlightenment (2003).

2. The distinction between religious freedom and religious toleration is analyzed in Janet R. Jakobsen and Ann Pellegrini, Love the Sin: Sexual Regulation and the Limits of Religious Tolerance (2003).