AHA Plenary, “The First Hundred Days: Priorities for a New US President”

Donald J. Trump will be inaugurated as the nation’s 45th president on January 20, 2017. With that fast-approaching fact in mind, the participants of this year’s plenary peered collectively through the fog of constant news coverage and indiscriminate commentary to compile a list of “first things”—those issues most likely to cross the new president’s desk within his first hundred days. The panelists fell broadly into two groups (with plenty of overlap, on the panel as in the world outside). Two of them (Nathan Citino of Rice University and Kenneth Pomeranz of the University of Chicago) spoke principally to the president-elect’s foreign policy; the other three (Khalil Gibran Muhammad of Harvard, Margaret O’Mara of the University of Washington, and Sean Wilentz, from Princeton) kept their sights trained on more domestic terrain. (Anand Yang chaired.) 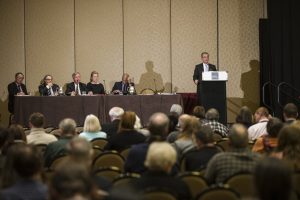 But both groups started in the same place that so many historians have found themselves since November 9, 2016: seeking historical precedent for our next president, a man with no experience in military or government. Still, Nathan Citino kicked off the session by drawing parallels to two previous inaugural years—1953 and 1981—each of which saw an incoming Republican administration declare itself “tougher and more confrontational” than the Democratic administration it would replace. Speaking specifically about the Middle East, his region of expertise, Citino found another possible analogue in 1973; particularly in the fate of a law-and-order president whose looming impeachment and preemptive resignation distracted attention from an escalating Arab-Israeli war. Citino expects Trump to postpone moving the US embassy from Tel Aviv to Jerusalem until after his first hundred days, which are “likely to be dominated by his relationship to Russia.” And he suspects congressional Democrats “will try to portray Trump as Putin’s client,” a strategy Citino dislikes, believing that it will fail to confront Trump’s “foreign policy genealogy”—comprised of a populist nativism and strategic unilateralism with roots in both parties—and hold hostage any American contributions to solving international crises with Russia; most pressingly, “the appalling magnitude of the violence in Syria.”

Equally nonpartisan was the warning from Kenneth Pomeranz that we not get mired in old controversies or outdated ideological disputes. “While the past matters, we also have to remember that things change,” he reminded the room full of historians; “the bargaining table should not be cluttered with yesterday’s issues.” In the case of China, whose past he has spent decades studying and whose relationship to the United States remains of exceptional global significance, Pomeranz sees “no need to make it even more complicated than it is.” For instance, while he believes that “quiet support for Taiwan may make sense . . . really loud support for Taiwan is likely to backfire.” By his often-wry reading, China’s leadership “never got the memo about the inevitable decline of the nation state” and continues to possess “a very expansive notion of what non-interference means.” Confident that “they have the better political system,” China now plans candidly to “wait us out.”

Determining whose political system will in truth prove stronger requires that we return home, to that domestic front where panelist Khalil Gibran Muhammad believes “the truth is, none of us know what is in store in the age of Trump.” If the road ahead domestically lies in shadow, Muhammad has also found distressingly little guidance from the road behind: “the past is missing a whole chapter in this American journey.” Yes, Woodrow Wilson’s racial bigotry (for instance) heralded a massive step backwards for African Americans (not only in federal occupations but nationwide). Still, Wilson “was a man of great intellect,” while Trump “has no such pedigree.” Wilson was an internationalist and a diplomat; Trump “is an anti-statesman.” For all that, Muhammad retains a remarkably robust faith in the power of communication to light the way forward. Throughout his time teaching in the Midwest, Muhammad witnessed the many ways that empathy “can help burst the bubbles we live in.” Trump has spent his life in a series of bubbles, Muhammad suggested; with resolve and persistence (on Trump’s part and ours) they must now be burst, one bubble at a time. Invite members of the Black Lives Matter movement to the White House, Muhammad counseled his president-elect; listen to their experiences with policing and see “how important proximity is to creating empathy.” Consider learning something from climate scientists; after all, “Mar-a-Lago won’t look good under water.”

For his part, Sean Wilentz uncovered—if not precedent or priorities—then an assortment of possible origin stories for Donald Trump. Moving nonchalantly from newspaper accounts of mobsters to fictional depictions of various gilded ages, Wilentz discovered Trump doppelgangers in the dystopian novels of Sinclair Lewis and Philip Roth; the roaring twenties of F. Scott Fitzgerald (though by Wilentz’s reading, “Jay Gatsby was no vulgarian”); Roy Cohn by way of Tony Kushner; and the “chic and rapacious Manhattan” of Tom Wolfe’s Bonfire of the Vanities (1987). On the other hand, Wilentz made clear his impatience with comparisons to Andrew Jackson, who “declared war” on precisely the kind of crony capitalism from which Trump prospered. And as for a historian whose work seems suddenly so very timely, “who can doubt Hofstadter now?” Wilentz asked.

Turning purposely, as she said, “to the economy, stupid,” Margaret O’Mara made the case that “meaningful economic and job growth is not a product of the first hundred days,” but something that emerges slowly, “from public investments in people, ideas, and technologies for which there isn’t a market.” John F. Kennedy’s rocket program became what O’Mara calls “the launching pad for Silicon Valley.” In 1962, President Kennedy promised us the moon, and while president-elect Trump broke nearly every rule of campaigning, by O’Mara’s count he kept one conventional tendency intact: he “made big, bold promises.” Which of them will he keep? Contemplating the proposed wall along our southern border and the incoming president’s call for a “total and complete shutdown of Muslims entering the United States,” O’Mara found more contrast than precedent in the presidency begun in 1981. O’Mara quoted Ronald Reagan from July of that year: “Our nation is a nation of immigrants. More than any other country, our strength comes from our own immigrant heritage and our capacity to welcome those from other lands.” On Friday, the morning after the plenary, in her final public remarks, the outgoing first lady echoed President Reagan. “If you or your parents are immigrants,” Michele Obama said to a roomful of educators at the White House and to students across the country, “know that you are part of a proud American tradition—the infusion of new cultures, talents and ideas, generation after generation, that has made us the greatest country on earth.” That country now holds its collective breath, awaiting the first hundred days of its new president.