Today’s What We’re Reading features the centenary of the beginning of World War I, a 1762 recipe for rabbit pie, a cross-discipline placement study on PhD employment, what librarians really look like, and more! 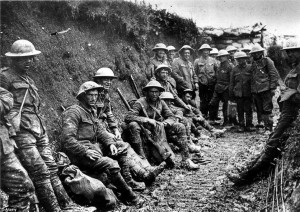 The Washington Post had two interesting articles about commemoration of World War I, the first about an art historian who is cataloging all the war memorials in the US, the other about political disputes over how to commemorate the war in Britain.

10 Interpretations of Who Started WWI

Historians give their opinion on which country was the most responsible for the conflict.

Co-founder of the excellent Nursing Clio blog Carolyn Herbst Lewis on the historical value of a very personal document that she “stumbled upon” in a digital archive.

Victor Davis Hanson has a particular take on historical context of the current drought in California in the National Review Online.

Some interesting food history documents—a recipe for a rabbit pie and an innkeeper’s bill from the 18th century—in a short piece by The Old Foodie.

Where They Are Now

The Chronicle published a placement study on PhD employment across 16 graduate programs at Penn State.

The Digital Public Library (DPLA) just launched a Tumblr, focusing on images and stories from the institution’s partners and friends.