Time to Right the Record: American Conservatism in the Archives

“We don’t have anything on conservative women, however . . .”

This is what archivists would tell me during the earliest days of my dissertation research. It was the turn of the 21st century, and I was enthusiastically joining a wave of new scholars taking up what Alan Brinkley had called, in his path-breaking 1994 American Historical Review essay, “The Problem of American Conservatism.” US political historians, according to Brinkley, had failed to make legible the very successful decades-old movement of American conservatism—a problem he correctly attributed to a failure of “historical imagination” and “basic lack of sympathy for the Right among most scholars.” Unlike most other ABDs and newly minted PhDs working in the field though, I was not just interested in American conservatism; I was also interested in women and gender. 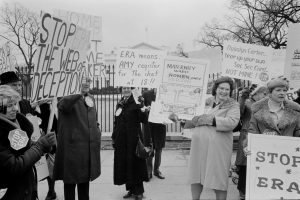 Women protest against the Federal Equal Rights Amendment in front of the White House, 1977. Library of Congress

My graduate education was partly responsible for this, since so many of my seminars focused on the vibrant scholarship on women, gender, and sexuality emerging at the time. It seemed to me that feminist scholars in other disciplines had already been, for well over a decade, developing good analytic tools for studying conservatism (see Deniz Kandiyoti, “Bargaining with Patriarchy” in Gender & Society), though no one seemed to be applying these methods to the “American Right” as a sweeping political tradition. Nevertheless, I did encounter some books during my exam preparations that made me want to broach the topic. Abortion and the Politics of Motherhood by Kristin Luker (1984) and Sex, Gender, and the Politics of ERA by Jane Sherron De Hart and Donald G. Mathews (1990) put me in the shoes of conservative women subjects—political actors with whom I disagreed about almost everything, passionately. The books, however, sealed my fate for the next decade—I wanted to accomplish what they had, and so began writing about how Cold War era housewife activists built important institutions, networks, and organs of grassroots conservatism from their suburban Los Angeles homes.

Those first encounters with archivists then stymied me: no collections on conservative women? How do you write history without documents? I discovered, however, that there were women in the archives; one just needed to know how and where to look. Archivists would tell me, “. . . however, we do have this “Radical Right” collection, and you might find something there” or “. . . however, you might look in the spy reports of the Los Angeles Jewish Community Relations Committee,” and so on.

Women were not jumping out of these papers by any means, but I developed a method for recovering them. Every day, as I combed through records of organizations, government officials, and political documents, I would keep a list of the names of women I would find in them—women who seemed to be involved in the 1950s anti-communist activities I was studying. After lunch, I would sit in front of the big computer available to researchers (this was 15 years ago) and look up phone numbers in the online white papers. Later I would make phone calls. I figured that the odds were in my favor: I was bound to eventually reach some of these women and convince them to talk to me. It worked. I met some important activists, managed to record their oral histories, and examine the troves of historical documents some had stored in their homes.

A decade later, now, I’m preparing for a roundtable next week at Harvard’s Schlesinger Library on “Righting the Record: Conservatism and the Archives.” The panel discussion will include historian Donald Critchlow (Arizona State Univ.) and two representatives of conservative organizations: Jennifer Marshall of the Heritage Foundation and Charmaine Yoest of American Values. New York Times columnist Ross Douthat will moderate. We will talk about the underrepresentation of conservatives—especially conservative women—in historical archives. Though I am the lone leftist in this group, I suspect we will all agree that this lacuna negatively impacts knowledge and analysis of US political history. Together, we will seek to find solutions to this other “problem of American conservatism”—the lack of a sufficient documentary record. In my opinion, solutions would involve both convincing historical institutions to acquire papers and to develop robust series that draw researchers to their locations. Libraries and archives must also convince conservative women and organizations to deposit their papers at institutions that welcome all scholars, better yet—the public. I look forward to the debate. 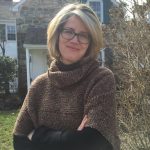 Michelle Nickerson is associate professor and graduate program director of history at Loyola University Chicago. She is the author of Mothers of Conservatism: Women and the Postwar Right and co-editor of Sunbelt Rising: The Politics of Place, Space, and Region (2012). Currently, she is writing about Catholic radicals who raided draft boards in the Vietnam War era. She tweets @MicNick11