Strike While the Iron is Hot

My breathing had slowed to next to nothing, perhaps only three breaths per minute. At this rate, I could continue working underwater for at least another half an hour. I had already been on the bottom of the Niagara River bed for over two hours, slowly excavating small test holes and looking for evidence of an 18th-century shoreline off Old Fort Niagara. Wine bottle bottoms, ceramics, trade beads, and numerous other artifacts dating from 1760 to 1780 had been deposited as trash throughout this small cove. Reaching down into the test hole, I found a small black object. It was a rose-headed, handmade iron nail, but unlike the hundreds of others I’d found during the excavation, this one had been modified. The pointed end had been purposefully curled around itself.

I began to wonder about the blacksmith who took the time to do this. I tried to picture him with the red-hot nail, gently tapping the end. I began to think about the other iron objects I had found: gun parts, hinges, door handles. Blacksmiths had been busy men, and I wondered what their lives had been like.

My dissertation examined the first British vessels built in the western Great Lakes through the lens of the maritime cultural landscape. This approach interprets individual artifacts, sites, activities, and cognitive elements not as isolated features but as parts of related cultural systems that influenced and were influenced by the natural geographic landscape. The British Army’s string of forts, docks, warehouses, smithies, shipyards, and vessels all combined to project British power into the western Great Lakes. I visited archives around the Great Lakes, but I also traveled to the locations mentioned in the archival sources and thus began to value experience as a source of historical data.

While visiting St. Joseph Island in northern Lake Huron, I saw the beaches where softball-size stones battered bateaux as they were pulled on and off the shore. This had a profound impact on the way I interpreted letters between cost-cutting British generals (who had not traveled to the region) and post commandants who tried to explain why their bateaux constantly needed repairs. Prior to my visits, my perception was similar to the generals’, but seeing the environment suggested the costs were justified. Post commandants had likely looked into the situation and seen the source of the damage. My trip allowed me to understand their perspective, something that reading letters alone could not do. Much later, I expanded my understanding by engaging in the very activities that supported this maritime world.

Immediately after the British captured Fort Niagara in 1759 during the French and Indian War, British General Jeffery Amherst ordered the construction of sloops and schooners, to move men and supplies, and ordered shipbuilders and blacksmiths from Albany to the western lakes.1 Blacksmiths were essential. Indeed, on the very day that Sir William Johnson captured Niagara, thus gaining access to Lake Erie, he immediately identified a good spot for both a dockyard and a blacksmith.2

Photo by Dan Horner, courtesy of the Museum of Underwater Archaeology.

The author shaping metal by striking it repeatedly with a hammer.

What was blacksmith work like? What was involved in blacksmiths’ efforts? I can’t visit them the way I can visit a remote island. I can, however, share, at least in a small way, aspects of their working lives. I can use their tools and learn about the physical strength and level of skill required. I had finished my dissertation, but I wondered if performing blacksmith work might help me see the world of an 18th-century smith differently. It’s one thing to read that skilled blacksmiths were in demand; it’s another to understand how difficult it was to gain that skill.

My friend Dan Horner, an avocational blacksmith with 10 years’ experience, helped me get started. Horner spent a few days teaching me a little of the blacksmith’s art at his home in northern Virginia. Horner’s shop was well stocked with tools and supplies, both primitive and modern. While several of the tools we used were not available at a frontier post in the 18th century, the overall process would have been familiar to a blacksmith serving the British Naval Department.

I decided to repurpose a modern ball peen hammer into an 18th-century-style hatchet, an activity similar to the work British smiths performed in their attempts to salvage scarce iron. I knew that trade hatchets were produced en masse in Europe for the fur trade and would rarely have been created on the frontier, but my purpose here was centered more on the process than on the product.

We started by heating the hammer head in a propane furnace (forgoing the 18th-century coal and wood furnace) to approximately 2,000 degrees Fahrenheit. It was a bitterly cold February day, a little unusual for northern Virginia, but one that would have been typical for the Great Lakes during the dead of winter. The heat from the forge was comforting, but it quickly became apparent that it created risks. The motto for the day was “Assume everything is hot.” Fortunately, my sole mishap caused only the loss of hair on the back of my hand, but it did drive home just how vulnerable 18th-century smiths were, considering the period’s rudimentary medicine.

Horner suggested I shape the metal by hand in order to understand the physical force needed. I spent much of the morning heating the “scrap” metal and then quickly hammering it into shape before it cooled, over and over. Holding the object with tongs in one hand and a heavy hammer in the other convinced me of the strength blacksmiths needed. As the metal quickly cooled, from malleable white hot to less-workable light red, I began to understand the speed required. I raised this issue with Horner, who pointed out some differences between our work and that of an 18th-century smith. He would likely have heated only the area he was shaping. And (Horner put this to me gently) a skilled craftsman would have been able to work the metal far faster than I could, and with greater precision. The extent of his skill would have far outweighed any small time advantage I had gained with the propane furnace. 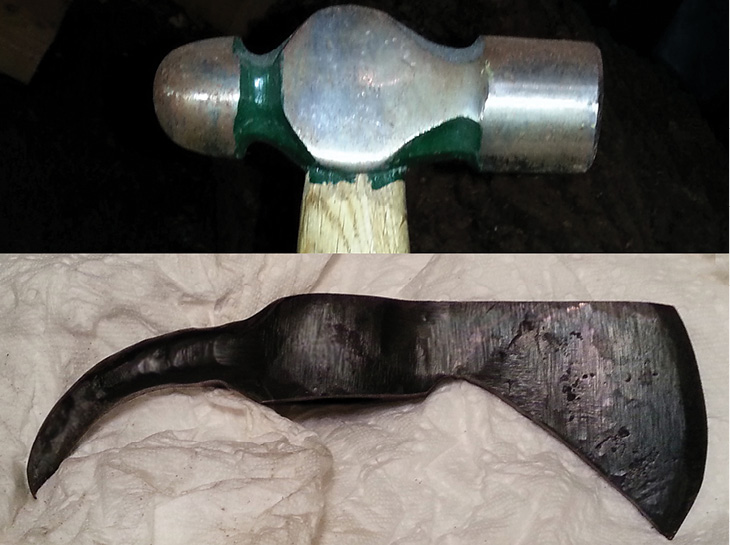 The original ball peen hammer is shown at the top while the bottom image shows the hammer after being reworked into an 18th-century style trade hatchet. Photos by author.

After attaining the basic shape, the next step was to grind off unwanted material. I benefitted from a power sanding belt, and wondered at the strength and time needed by an 18th-century smith who had only a manually powered spinning grinding stone. As I finished the piece, my mind returned to the nameless blacksmiths mentioned in my research sources, and while I had as many (if not more) questions than when I started, I had gained a general appreciation for the blacksmiths’ lives and work.

What can we really know of the British Army’s blacksmiths in the Great Lakes in the 18th century? Most left no writings. We know the part they played in keeping the army’s vessels afloat and the role those vessels played in the spread of empire. But if we are concerned with their lives, our research options are few. Experience, however, provides another source of information about this otherwise silent cohort, one made more valuable because of the scarcity of alternatives. By trying my hand at the forge, I gained a sense of the skill required to be a blacksmith and thus a better appreciation for the value of such a useful talent on the frontier, a much better sense than I could gain through just reading a letter or report or looking at an artifact. The information lives in the experience. It can be “read” only by putting on the leather apron and getting one’s hands dirty and maybe even a little singed.

I will now experience an 18th-century smith’s hammer differently as I hold it in my hand, feeling its weight and recollecting my own experience. Just as my hatchet slowly took shape the more I worked it, so too does my appreciation for and understanding of the individuals I study improve when I combine the document, the environment, the artifact, and now the experience.

An experience out of context probably would not contribute much understanding, but this is true of any information taken out of context. The best historical research integrates multiple lines of evidence from as many sources as possible. This multifaceted approach is not unlike my use of new media for the online Museum of Underwater Archaeology (www.themua.org). In addition to text, we use images, video, and sound to offer something about historic shipwrecks and submerged sites for visitors who learn better through many senses. The multisensory approach is perhaps the chief strength of other areas of public outreach, such as living history. These programs can’t put visitors into the past, but they can transmit information in ways beyond text, such as sight, sound, touch, and taste (eat a piece of hard tack sometime). If trying our hand at a shared experience does nothing more than spark new lines of enquiry, it is worth it. My question now is: what will I try next?

T. Kurt Knoerl is founder and director of the online Museum of Underwater Archaeology. He earned his PhD from George Mason University, where he studied colonial, maritime, and digital history.