Selma: The Past Isn’t Even Past, Especially on Twitter

This post is one of a series on AHA Today in which historians and filmmakers reflect on the historical value of the film Selma. The author, Carol Anderson, is an associate professor of African American studies at Emory University. She is the author of Eyes Off the Prize: The United Nations and the African American Struggle for Human Rights, 1944–1955 (Cambridge, 2003) and Bourgeois Radicals: The NAACP and the Struggle for Colonial Liberation, 1941–1960 (Cambridge, 2014). Her op-ed on Ferguson and white rage in the Washington Post was the most widely shared in 2014.

Social media was on fire regarding the film Selma and the Oscars. Anger seemed to focus on the “snub”: no best director or best actor nomination. Indeed, within hours of the American Academy of Motion Pictures (AAMP) announcement of this year’s nominees, #OscarsSoWhite went viral with 95,000 tweets per hour: “Apparently to @TheAcademy, in 2015, only the stories (some made up) of white people are relevant.” Another tweet listed the “nominees for best picture”: 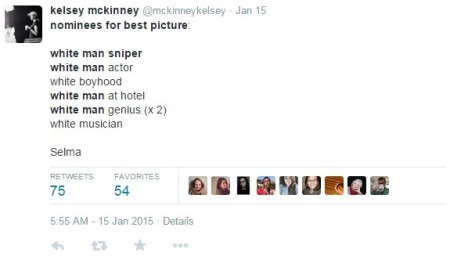 But, in the end, an Oscar nomination was not the point. As Spike Lee explained in a February interview, “People are protesting about stuff that really matters … the jury decision in Ferguson [and] Staten Island. That’s why people are storming the streets—not because of what the Academy says. There are more serious matters in this country than how the Academy votes.” He was almost right.

Selma provided another high-profile venue, like the 50th anniversary ceremony on the Edmund Pettus Bridge, to dilute the conscience-numbing Kool-Aid of post-racial America. With the killings of Tamir Rice, John Crawford, Trayvon Martin, Jonathan Ferrell, Michael Brown, and Eric Garner, coupled with the wave of new voting requirements passed in many southern and swing states after the US Supreme Court’s Shelby County v. Holder decision, the debate over Selma is less about the film than about what it symbolizes: a narrative of hard-fought progress in the 1950s and 60s dissolving into retrenchment and reversals in the 21st century. Selma shouts #BlackLivesMatter.

This was best revealed by the candid admission of an academy voter who voiced righteous indignation that “the cast show[ed] up in T-shirts saying ‘I can’t breathe’” at the film’s New York premiere. She was outraged, livid. But not at the chokehold that took Eric Garner’s life. Instead, her ire was directed at the t-shirts. “I thought that stuff was offensive. Did they want to be known for making the best movie of the year or for stirring up shit?”

The answer is “both.”

For many black Americans, past and present have merged recently in real and powerful ways. Fewer than 2 percent of African Americans in Selma were able to register to vote prior to the Voting Rights Act of 1965. Discrimination so commonplace 50 years ago now coils like a python around Ferguson, a city nearly 70 percent African American, where black voter turnout in the 2013 municipal electionwas a paltry 6 percent. The Supreme Court’s gutting of the Voting Rights Act in 2014 confirmed that the chicanery that created 2 percent registered black voters in mid-20th-century Alabama was as acceptable to powerful sectors in the United States as the machinations that made possible 6 percent turnout in 21st-century Missouri.

Similarly, the lack of African American representation in the Ferguson police force and at City Hall was as visible as that in the academy, where 94 percent of voters are white. The recognition that black bodies were no more than revenue generators, as the Department of Justice report on Ferguson made clear, was also—in a less violent or economically disruptive way—the case for the not-so-diverse academy. African American viewers are central to the financial health of the AAMP. And like protests in Montgomery and Nashville in 1955 and 1960 respectively, #BlackTwitter’s calls for a boycott of the televised awards show broadcast were designed to serve as a wake-up call. It may have worked. The show dropped 17 percent in the all-important 18–49 year old demographic. The 2015 Oscars, as the New York Times noted, “might be remembered as the Revenge of ‘Selma.’”

The award for Best Original Song, won by Common and John Legend for “Glory,”was no salve. The Oscars, many in the Twittersphere made clear, are about black people knowing “their place.” One tweet laid out the roles played by African American women with Best Acting awards: maids, slaves, a phony psychic, and abusive mothers. David Oyelowo, who portrayed Dr. Martin Luther King Jr. in Selma, underscored the point in an interview at the Santa Barbara International Film Festival: “We, as black people, have been celebrated more for when we are subservient, when we are not being leaders or kings or being at the center of our own narrative.”

Some on Twitter groaned that all of this black outrage was, frankly, outrageous. Was the academy supposed to nominate someone black just because he or she showed up in a film? This was about “art.” This was about quality. That paean to the AAMP’s colorblindness, however, was mocked in another tweet:

Yet, one Twitter follower did notice a silver lining of sorts:

Selma, then, and Ferguson now: both reveal the ubiquitous racism shared by moderates and right-wingers alike—racism that does not question black inequality but only the brazenness and brutality of the oppression that would guarantee it.