Reflections from the AHA’s Jameson Fellow: “Decentering the Cold War from the Library of Congress” 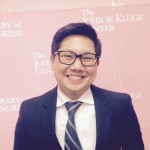 Kevin Y. Kim was the 2013-14 AHA-Library of Congress J. Franklin Jameson Fellow and is a senior lecturer in history at Vanderbilt University. Kevin conducted his research at the Kluge Center in summer 2014. He can be contacted at kevin.y.kim@vanderbilt.edu.

Few historical events seem so overwhelming, so tragically inescapable as the Cold War. That isn’t surprising for an event that touched every corner of the world, sundering and firing human relationships, economies, political systems, and physical landscapes from the central Asian steppe to America’s industrial heartland. Even more than the American Revolutionary War, the Civil War, or the very rise of American democracy itself, the Cold War, for many Americans today, seems inevitable. After all, the US-USSR confrontation pitted communism versus capitalism, class conflict versus the domino theory, Uncle Sam versus Uncle Joe—natural, blood-sworn enemies destined to duel in the ghoulish twilight of World War II. Right?

Ironically, few Americans at the time thought so. Historians have illuminated such lively debates about the Cold War’s causes and consequences in American and global capitals from Washington, Berlin, and London to New Delhi, Moscow, and Tokyo. But what about Americans who challenged the Cold War in even more radical ways—indeed, not only from the margins of central governments, militaries, and societies, but within the very halls of American (and sometimes non-American) power?

Drawing from my larger project on Henry Wallace, the towering liberal of the New Deal and the Second World War, and former US president and eminent Republican Party leader Herbert Hoover—as well as their respective political constituencies—my research at the Library of Congress sought to trace such rich veins of contestation, contingency, and often surprising moral and intellectual clarity in an era known for its profound conformity and ambiguity. If such rich veinsof Cold War counterculture existed,I thought, before becoming the 2013–14 J. Franklin Jameson fellow, they would course through the ore of our nation’s preeminent depository. If not, I braced myself, I should rethink my assumptions: the well-worn images of Wallace as a woolly-eyed fellow traveler and Hoover as an out-of-touch “isolationist” might prove triumphant after all.

Instead, my research challenged and enriched my project’s larger narratives, arguments, and methodologies. World War II remained central, the devastating alpha event that drastically reordered world society and politics, leading directly—though not inevitably, in either Wallace’s or Hoover’s eyes—to the Cold War. Further, my research confirmed that the well-known dilemmas and decisions of the Cold War, from Bretton Woods to the Vietnam War, have to be seen as part of a wide-ranging attempt to articulate America’s postwar role in a world that was rapidly, even dangerously, globalizing, while simultaneously managing America’s rise as a leading financial and industrial power. Finally, while Wallace and Hoover comprised the leftmost and rightmost edges of a centrist Cold War establishment, the vast, often intimidating holdings at the Library of Congress revealed themselves only so long as I stuck to my neo-Baconian guns and resisted categorizing, a priori, either figure’s precise positions and activities in American and global life. Their broad-based inspiration and anger, as well as their long-running flaws and contradictions, did not surprise me; but their shifting proposals, tactics, and far-flung networks of personal contacts and political information did.

Most important for the purposes of my project, the Jameson Fellowship allowed me to fulfill my proposal’s main goal: to illuminate Wallace’s and Hoover’s wider reach. The anti-Cold War “consensus” politics of both men were vitally connected to broader streams of American and global life, connections made visible in the papers of their many supporters and critics in postwar political circles, from Minnesota Progressive Party leader Genevieve Steefel, US Supreme Court Justice William O. Douglas, Theodore Roosevelt’s “Tennis Cabinet” member John Callan O’Laughlin, and Senator Robert Taft (R-OH), to ornery New Dealer Harold Ickes, national security advisor W. Averell Harriman, and Time-Life media moguls Henry and Clare Boothe Luce. The Jameson Fellowship enabled me to decenter the Cold War by painting Wallace and Hoover against a fuller spectrum of American politics stretching from Paris after the First World War to Third World decolonization in the 1960s.

As it was for Wallace and Hoover, my work was not possible without the help of others. The library’s Manuscript Division staff offered unstinting, gracious support. Like the library’s many researchers, I owe an immense debt to the care and knowledge with which its librarians, particularly FredAugustyn, Jennifer Brathovde, Jeff Flannery, Patrick Kerwin, Bruce Kirby, Joe Jackson,and Lewis Wyman, oversee our nation’s greatest documentary treasures. Furthermore, the Jameson Fellowship would be woefully incomplete without its included residency at the John W. Kluge Center. As past Kluge fellows know, the center’s passionate, engaged staff, particularly Jason Steinhauer, Mary Lou Reker, and Travis Hensley, maintains a vibrant scholarly community in the heart of our nation’s library. To reside there is to learn; one’s work becomes delightfully, productively decentered simply by interacting with the center’s staff and visiting scholars working across the full sweep of our nation and world’s history. To the Kluge Center’s staff, and the AHA, particularly Dana Schaffer, I also give my deepest thanks.

The deadline for applications for the 2015–16 Jameson Fellowship is April 1. For details about how to apply visit our Grants and Fellowships page. To watch Kevin Kim’s lecture at the Library of Congress based on his research, view the YouTube video below: