The Last Artifact of the World Trade Center

Undoubtedly, when in New York for the annual meeting of the American Historical Association, many members will visit the National September 11 Memorial and Museum at the World Trade Center, as some 16 million other visitors have done. Here is something they did not and you will not see: the last remaining intact artifact of the World Trade Center—the iconic Koenig Sphere. It has been banned from the September 11 WTC memorial.

For 30 years the Sphere stood in the center of the WTC plaza as a symbol of world peace. Countless visitors from around the globe and across the United States posed before it for photographs. Scores of these can be seen online today.

Every nice day for 30 years office workers gathered around it at lunch to relax, talk, and people watch. They passed by it every morning and every evening.

On September 11, when the dust cleared, the Sphere, torn and battered, stood alone in the rubble that had been the World Trade Center. It was carefully salvaged, and under the watchful eye of its sculptor, the now aged Fritz Koenig, who flew in from Germany, the Sphere was installed in Battery Park, about a half mile south of “Ground Zero” as a “temporary” memorial. 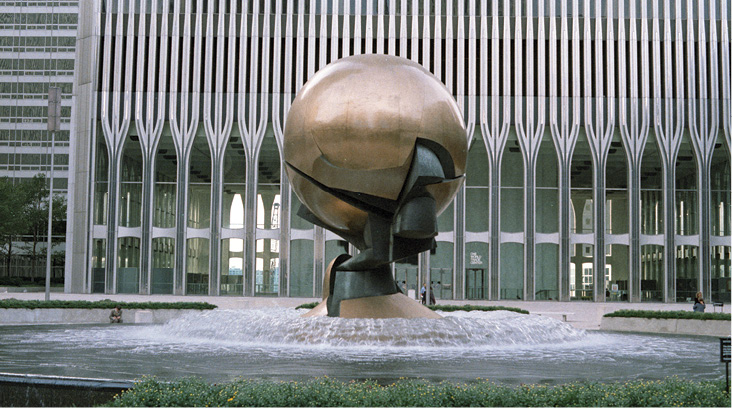 The Sphere at the World Trade Center in 1984.

It was the full intent and promise at that time to return it to the rebuilt WTC as the centerpiece of the future memorial.

At that time, then Mayor Michael Bloomberg called it “a stirring tribute to the courage of those we lost and an enduring symbol of the American spirit.”

Today, however, the millions who visit the memorial, at the very place where the Sphere stood and survived the attacks, do not see it. They have no idea it even exists.

More than 13 years after the attacks, the Sphere still sits neglected and forgotten in an obscure corner of Battery Park. Seen only by the occasional tourist who has no idea what this battered sculpture is or why it’s there (it was moved from its original “temporary” spot in Battery Park to a new “temporary” spot).

The memorial jury wiped the site clean of all its history in order to remake it as a “special place of healing”—citing the Vietnam War Memorial of Maya Lin (a jury member) as their model.

However, a memorial in Washington, DC, for a war fought on the other side of the world is not a viable model for what we do at the World Trade Center. No battles of Vietnam were fought on the National Mall; none of the names on that wall died there. It did not replace any authentic artifacts of the war.

The WTC is the site of the event. It is or should be self-evident: our first task at the “national” September 11 memorial is to confront September 11.

There is no precedent for a memorial at the historic site of an event it supposedly commemorates remaking the site so that it does not recognize its history. Imagine the USS Arizona Memorial without the USS Arizona. What if the Hiroshima Peace Memorial discarded the Dome remnants, Gettysburg the battlefield and remaining artifacts, Auschwitz the camp remnants?

How long would it be before those histories would be forgotten?

At the World Trade Center site itself, all reminders of the September11 attacks have been willfully and intentionally eliminated. It is great that we have a below-grade museum that contains so many of those artifacts and so much of the history—including the razed fire truck, Engine 21, that my brother Captain William F. Burke Jr. and his men rode down in. However, the Sphere could not fit there, and it does not belong there. It belongs on the plaza.

The irony is that nothing is more “healing” than history, knowledge, and understanding.

September 11 is the most significant historical event in most of our lives. It changed everything. It is incumbent upon historians to preserve its history. Future generations depend upon you.

In the meantime, this January, should you visit the memorial and want to see the last, most significant authentic artifact of September 11 and the WTC, head south on Greenwich Street to Battery Park; make a right toward the esplanade. Take a selfie or two before it. You can show it to your grandchildren.

Michael Burke
Save the Sphere

Editor’s note: This letter did not reach us in time to be published before the annual meeting in January, but we hope that our readers will still find it of interest.

Tags: Letters to the Editor