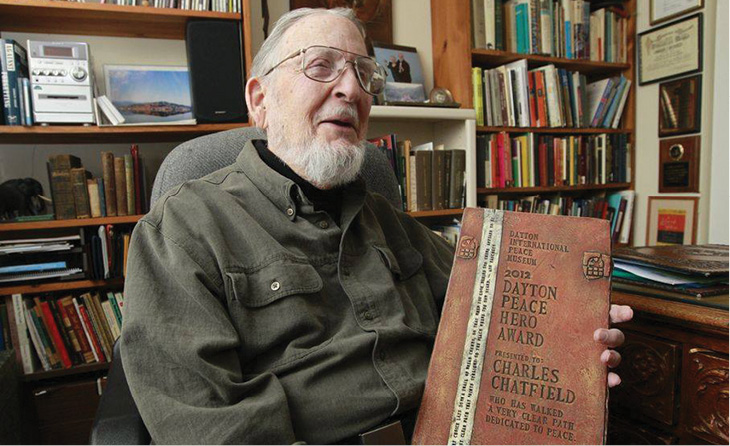 This photo of Charles Chatfield is used by permission from the Springfield News-Sun.

Charles Chatfield, professor emeritus of history at Wittenberg University, died at his home in Springfield, Ohio, on January 15, 2015. He was 80 years old. Born in Philadelphia and raised in Oak Park, Illinois, Chatfield graduated from Monmouth College; he earned his MA and PhD in history at Vanderbilt University, then did postgraduate study at the University of Chicago Divinity School. He was professor of history at Wittenberg University for 38 years, starting in 1961, and held the H. Orth Hirt Chair in history. He directed international education from 1975 to 1983, and with his wife Mary’s help created and directed a study-abroad program, Global Issues and World Churches. He devoted his teaching and scholarship to the history of matters of peace and justice, both national and international; his books and articles helped create a new branch of history: peace history/studies. At the end of the Cold War he co-directed a joint Russian-American study of the ideas of peace in Western civilization.

Chatfield authored, edited, and co-authored numerous books, including the winner of the 1972 Ohio Academy of History Publication Award, For Peace and Justice: Pacifism in America, 1914–1941. Other books and edited collections include Transnational Social Movements and Global Politics (1997), Peace/MIR: An Anthology of Historic Alternatives to War (1994), American Peace Movements (1992), and Peace Movements and Political Cultures (1988). In 1987, after Charles DeBenedetti’s untimely death, Chatfield accepted the task of shaping DeBenedetti’s exhaustive but unfinished manuscript into An American Ordeal: The Antiwar Movement of the Vietnam Era (1990). He also published countless scholarly articles, book reviews, book chapters, and other writings, and remained active throughout his retirement.

A Danforth Fellow, he also received the Lifetime Achievement Award from the Peace History Society, an honorary doctorate from Monmouth College, and the 2012 Peace Hero Award from the Dayton International Peace Museum, where he also helped ­establish the Abrams/Chatfield Peace Library. The extensive Charles ­Chatfield Papers are deposited at the Swarthmore College Peace Library. Locally, he served several church and service organizations. His family writes that “he relished the written word, theater and music, dance and travel, people, flowers, and egregious puns.”

While Chatfield built his reputation as a scholar and historian, he continued to work as an activist, earning the respect and devotion of his colleagues and students. Of his first decade at Wittenberg, in the 1960s, Chatfield remarked in 2013, “It was so exciting, and still is to think on.” Peace studies, he explained, is “a field which attracts people with a real sense of values.” Meanwhile, he created at ­Wittenberg legendary courses on the Vietnam War and on the craft of history. One of his former colleagues referred to Chatfield as “a warm, kind and tough-minded colleague for whom I had the greatest respect.” One former student deemed himself “lucky to have a college professor that was so passionate about student learning.” He also inspired a generation of graduates from Wittenberg to become teachers. As one wrote, “Dr. Chatfield was brilliant, kind and generous. He taught me how to think and write carefully, and his example helped inspire me to become a teacher.”

A devoted husband, father, and grandfather, Charles Chatfield is survived by his wife, Mary Frances (Poffenberger), and by his son, David Charles, and daughter, Carol Anne (Richard) Holmgren; his sister, Anelise (Bob) Smith; as well as grandchildren, in-laws, and nephews and nieces.

Guidelines for Submissions of In Memoriam Essays

Authors of obituaries are encouraged to submit a photograph (as a high-resolution digital image) of the deceased for publication with the essay.

After the editorial board accepts an essay for publication, Perspectives on History will try to publish the essay at the earliest opportunity.