Francophone Historians of the United States: A Voice in the Wilderness?

As an American, I find that one of the most interesting aspects of teaching US history in Montreal at l’Université du Québec À Montréal (UQÀM) is working in French. UQÀM is a proudly francophone institution, so not only is all my course teaching done in French, but virtually all undergraduate reading assignments, and many graduate-level texts, are given in French as well. (It is great fun to have my students read Tocqueville’s classic Democracy in America in the original language!) Since arriving in Montréal in 2001, I have worked to master the French-language literature of the field in order to make up course syllabi and to provide extra suggested readings for student papers.

Recently, as part of a conference on American Studies at the École des Hautes Études en Sciences Sociales in Paris, I was invited to discuss the influence of francophone scholars of the United States on their American colleagues. I decided to do a more systemic inquiry: What French-language monographs have achieved notice in the United States? Which did US-based historians read? To answer these questions, I sought information at the most basic level, and used a variety of methods to get it, including a search of the bibliographic database WorldCat to discover which French-language monographs in US history appear in the largest number of its member libraries worldwide.

Meanwhile, as the best shorthand measure of the visibility and impact of books within the historical profession, I decided to investigate scholarly book reviews. Using the databases on JSTOR, I reviewed the back files of the two most prestigious journals in the field, the American Historical Review and the Journal of American History, from their founding dates onward. I checked for reviews of French works by looking up the keywords États-Unis, Américain, and Américaine, since these words seem to figure in almost all titles or subtitles. I then tabulated how many reviews of French monographs had appeared, their dates, and the names of the reviewers. (Tables with detailed results of these searches are available on my website, www.gregjrobinson.com.)

My research provided me much food for thought. In the AHR I found 21 book reviews over the century between 1905 and 2008, including one in the 2000s, four in the 1990s, and two or three in most other decades. What is interesting—other than what seems to me an absurdly tiny number of reviews in relation to the production of French-language books on American history—is the shift in value assigned to such works. That is, in the first half of the 20th century, the francophone authors reviewed in the AHR were predominantly authors whose names did not become well-known, such as Achille Viallatte, Jean Paul Hütter, and Ernest Nys. (The only well-known figure among those reviewed was the litterateur Bernard Faÿ, a friend of Gertrude Stein who would later write a popular biography of Benjamin Franklin.) Yet who were the reviewers? They were among the most eminent and influential of US historians: Samuel Eliot Morison, Samuel Flagg Bemis, Carl Becker, Leo Wolman, and Theodore Salisbury Woolsey, plus educational reformer George F. Zook. The production of such reviews indicates the wide multilingual reading of earlier generations of American historians and the broad transnational discourse in which they participated. 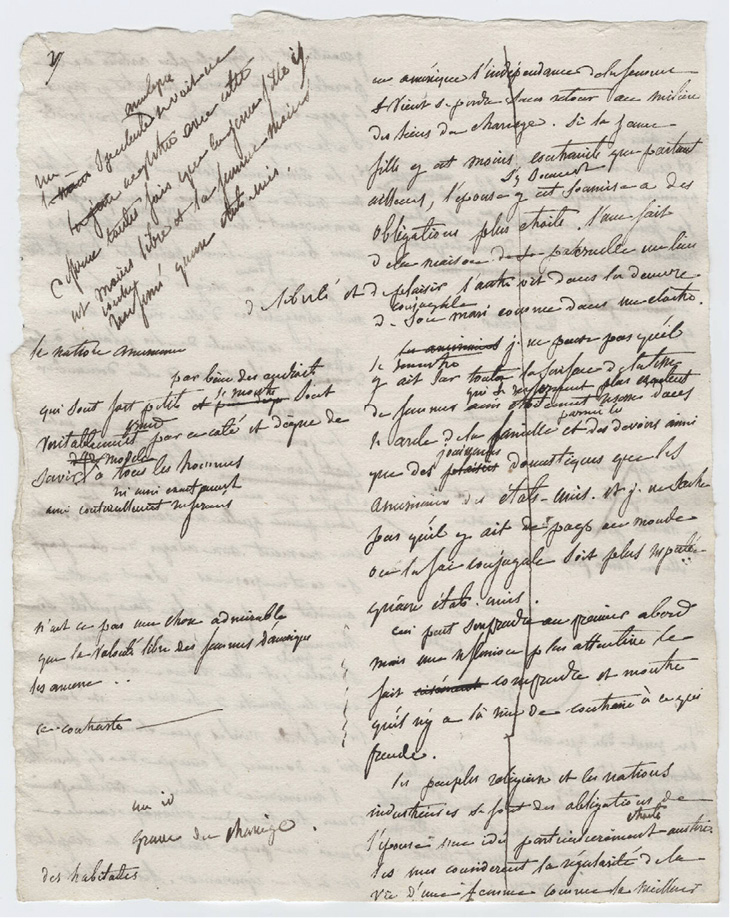 A page from the original working manuscript of Democracy in America by the French author Alexis de Tocqueville. The manuscript is held at Yale University’s Beinecke Rare Book & Manuscript Library.

Conversely, in recent decades, the French-language books reviewed in the AHR have generally been studies by eminent specialists: Jean Heffer, René Rémond, and Yves-Henri Nouailhat, among others. Yet the reviewers of these works have either not been Americanists, or have been Americanists who, while solid professionals all, have not enjoyed the same kind of international renown as their earlier counterparts (I apologize if I have slighted anyone unintentionally). This point would seem to indicate the lack of distribution and currency that French books currently enjoy in historical discourse in the United States.

In the case of the Journal of American History, the progression is somewhat different. I have counted 24 reviews of French-language books in JAH over the course of the period 1914–2010. However, during the first half of that period, when JAH was the Mississippi Valley Historical Review, it boasted only six reviews of French books, and neither authors nor reviewers were first-rank names. Worse yet, between 1951 and 1977, the period in which writing about the United States began to take off in France, Jean-Baptiste Duroselle’s landmark 1960 foreign policy study De Wilson à Roosevelt was the only French book to be reviewed in JAH.

In 1977, for reasons that are not clear to me, there was a sea change in the JAH. In the five years that followed, reviews of no less than seven French books appeared, including works by well-regarded authors such as Robert Lacour-Gayet, Jean Heffer, and Pierre Melandri. Strikingly, the reviewers of these books were predominantly foreigners themselves—including two professors from my home institution, UQÀM. Still, after that brief interlude, no more reviews of francophone literature appeared in JAH for more than a decade.

In the 1990s, under the leadership of editor David Thelen, the JAH began to make internationalization a priority. The JAH appointed a distinguished cast of international contributing editors to report on new literature (Professor Bruno Ramirez, my opposite number at Université de Montréal, provided a regular section on Canadian publications), while JAH editors undertook a series of forums on opening up American history to the world. In line with this focus, since 1994 reviews of outstanding French-language monographs have appeared in the JAH on an average of once every two years. The reviewers have included such well-known specialists as Dirk Hoerder, Willard S. Randall, Peter Stearns, and Max Paul Friedman.

Why have francophone scholars enjoyed so little currency among their American peers? To some degree it is a matter of the language barrier, which leads Americans to neglect foreign-language texts.1 Certainly, English translations of books by French authors are generally available in many more library collections than the original editions. Still, the lack of attention paid to francophone historians is not simply a matter of language. Rather, as the paucity of scholarly reviews of foreign books in US journals throughout the balance of the 20th century suggests, the US academy has historically suffered from an overly insular approach: US-based Americanists are used to speaking only with each other. Beyond any question of individual merit, the principal way for francophone historians to get attention in the United States is to publish there. The esteemed scholar François Weil’s only work to be reviewed in either of the main American journals is his History of New York, written in English and published with Columbia University Press. Olivier Zunz, a Frenchman who has entered the US academy and published with American presses, has had six books reviewed in AHR and has been invited to review two others himself. (To offer some perspective here, my own three monographs, which were brought out by US-based university presses, have all been reviewed in both the AHR and the JAH, and I have produced reviews for both journals.)

What are scholars missing by ignoring the French-language historiography? A good deal, in my view. Francophone historians bring a useful outside perspective to studies of the United States, and they are more comfortable with transnational approaches. In multiple subfields, including Louisiana history, the history of religion, and Native American studies, there have been signal contributions made by scholars writing in French.2 Perhaps not surprisingly, the histories of French and French Canadian immigration to the US have long remained dominated by French-language authors.

In sum, greater engagement by Americans with French-language writing would help enrich the study of US history. Certainly, the fact that so many of the central scholars of the first part of the 20th century wrote reviews of French-language books in AHR testifies to their interest in outside perspectives and transnational dialogue. The JAH’s international turn is thus a welcome development, in my view, and one that I hope we can all build on.

Greg Robinson, a native of New York City, is professor of history at Université du Québec À Montréal. He is the author of By Order of the President: FDR and the Internment of Japanese Americans (Harvard University Press, 2001) and After Camp: Portraits in Midcentury Japanese American Life and Politics (University of California Press, 2012).

2. To take one example, in my own area of interest, Japanese Americans, the very first serious work to appear in any Western language was Américains et Japonais, Louis Aubert’s 1908 study of immigration and international policy, and several more works appeared in the two following decades.