One of the most attractive virtues of democratic government is that it offers protection from the many for the few. In this ideal form of Western democracy, and American democracy in particular, the voices of the minority, and their freedom and safety, are protected. Members of minority groups can participate in and shape the system, which depends on the free expression of ideas, the education of the public, and the ability of every adult individual to take an active part in the selection of representatives who pass legislation and allocate public funds. In their current iteration, these principles date from at least the Enlightenment, and are powerful enough to have spawned, in the 20th-century United States alone, the civil rights movement, the women’s movement, and the movements for LGBTQ rights.

This issue of Perspectives on History appears following a series of world events that have tested the limits of democracy and renewed the urgency of old questions. Events in Ferguson, Missouri, remind us that American society has a long way to go to eradicate racism and inequality; the killing of 12 Charlie Hebdo employees after the publication of irreverent cartoons repeats the cycle of stereotyping, hatred, and violence that we have seen since the Salman Rushdie affair; and news about recent beheadings and the flogging of a blogger in Saudi Arabia raise questions about the responsibilities of individuals living in democracies towards those who live under other national systems (Is speaking out against human rights violations in other parts of the world an act of colonialism or imperialism? Is it more harmful than useful because it propagates stereotypes? Or is it a valid moral stance?). The aftermath of these events are unfolding against a backdrop of continued massive displacement of people in the Middle East and the disruption of people’s lives in the Ukraine as armed conflict continues. Despite the promise of democracy, the security and liberty of people throughout the world are threatened. Inequality often prevails. 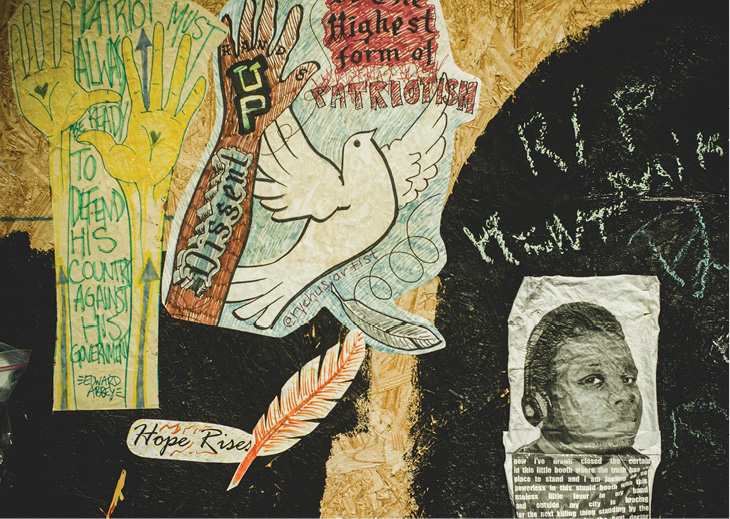 This issue of Perspectives turns away from failures and celebrates successes—instances in which individuals have joined together to put democracy into practice, to bring reality closer to what they think of as the ideal. Steven Hochstadt explains why a small college with a small history department needs an African American history specialist, and why it hired one. Joseph Locke and Ben Wright write about the democratization of teaching materials—and how they and a group of other historians went about creating an online, open-access textbook. Amanda Moniz writes about the National History Center’s role in providing congressional staffers with historical background about political hot topics. And Maria Bucur shows us how women can advocate for their rights within academia.

Likewise, the painting on the cover was done by a woman who has thought seriously about different ways to move toward the democratic ideal. Joyce Owens’s art has depicted African American slaves not as chattel but as strong men and women, showing their dignity and humanity, helping her and other African Americans reclaim the pasts of their families and ancestors—remembering them, but also rethinking the present and reimagining the future. This forward thinking captures the way many historians deal with a diffuse term like democracy, both in the context in which this issue of Perspectives is published and in the work we do at the AHA every day.

Participating in a democracy is not only about voting and writing letters to one’s representatives. As the historians who have written for Perspectives have shown, sometimes it is about allowing others to formulate new questions and approaches, as Kelsey Kauffman did with her students in prison (see her article in the February issue). At other times, it is about experimenting with teaching materials so that a larger number of students can afford their education and have opportunities to encounter multiple voices from the present and the past. Living in a democracy affords us the luxury of standing up to oppressive voices that refuse inquiry and debate, as well. These are only a few examples of how historians who study the past can be active in civic life. These examples can remind us that individuals in an explosive world can do something, even if we cannot stop the violence.

Shatha Almutawa is interim editor of Perspectives on History.

Tags: From the Editor