When historian Renee Romano decided to research marriages between black and white Americans for her dissertation in 1993, her adviser asked her whether she thought she would find enough sources. She was able to find some—mostly political and cultural—but not many personal accounts that were collected in an archive; at that time, she could not find any that focused on “people’s lived experiences of identity issues.” In 2011, the Brooklyn Historical Society began creating this very kind of collection, and three years later, Crossing Borders, Bridging Generations was unveiled. As part of the project, 100 oral histories were collected from individuals who self-identify as mixed-heritage. The oral histories are easily accessible to the public, and 35 of the interviews recorded are available online at cbbg.brooklynhistory.org.

When asked about the scope of the project, Romano, who served as an adviser to the project, talked about “the importance of allowing people to define for themselves what they saw as the borders they were crossing.” For some, it was marrying someone of a different race, for others it was someone from a different religion. Some of these unions were considered taboo or suspect in American society, Romano told me, and some were even illegal. So interviewers who collected the oral histories asked people about how internal and external factors affected their lives and relationships. 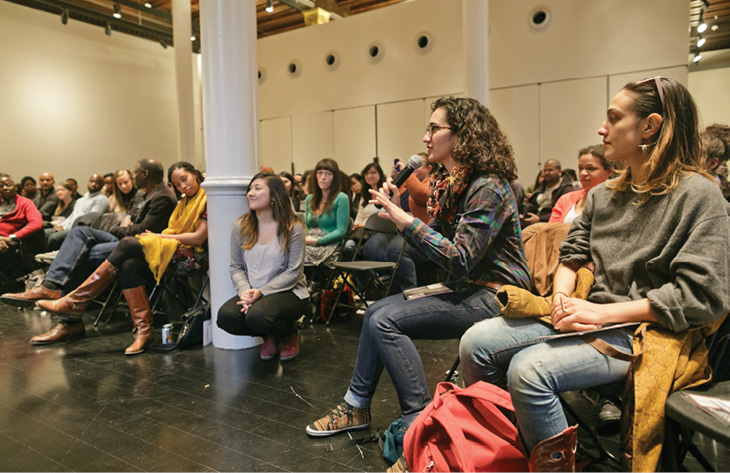 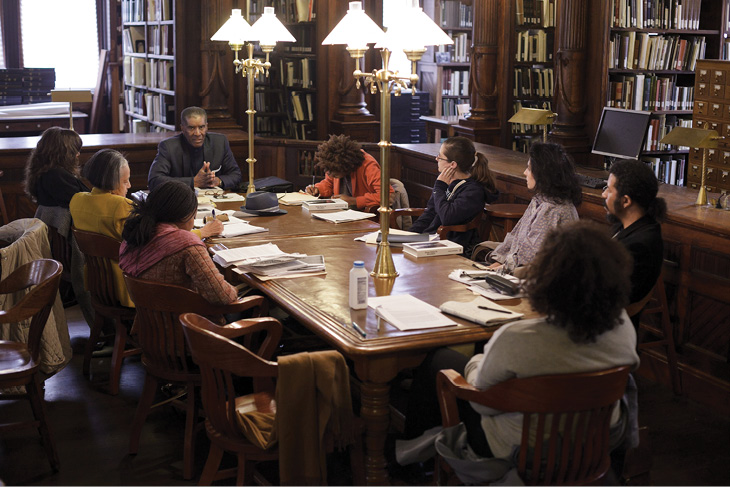 The Brooklyn Historical Society hosted a number of public programs about race and mixed-heritage identity in conjunction with the Crossing Borders, Bridging Generations project since 2011. Photos by Willie Davis.

In Alexander David’s oral history, conducted by Amna Ahmad, he talks about being “other” to the racial groups he belonged to—“to the white kids I was Asian and to the Asian kids I was white.” Anna Roberts remembers, when she was in elementary school, not understanding what a student meant when she asked her if she was “mixed” and how she eventually came to describe herself as “mixed.” Asha Sundararaman remembers her college orientation, when someone asked her where she was from, and then where she “really” was from. “College was like that,” she said in her interview with Jen Chau, but sometimes so was elementary school. Caroline Fermin was asked, “Why is your hair so puffy?” when she was young and pining for a swinging ponytail.

The Crossing Borders, Bridging Generations project not only documents the daily lives of people who consider themselves to be of mixed heritage, but also is testament to the diverse macrocosm of Brooklyn. Brooklyn’s demographics have changed dramatically over time, Deborah Schwartz, president of the Brooklyn Historical Society, told me in a phone interview. “There was a time when there was a huge population of Swedes, and a neighborhood that once would have been described as Swedish or Norwegian is now primarily Chinese and Mexican,” she said. “On top of that, of course, this was a borough that also had a very significant enslaved population going back to the early Dutch period.”

The project included public programming that fostered discussion about race, identity, and inter-cultural relations. The website also includes scholarly essays or “exhibits.” Ann Morning, a sociology professor at New York University, contributed the online exhibit Race & Its Categories in Historical Perspective.1 This educational tool explains the origins of the classifications of race that are used in the United States today, tracing them back to the medieval and early modern periods, and also outlining critiques that show their shortcomings in describing contemporary Americans. Brooklynites showed curiosity about these racial classifications after a BHS panel on the Census Bureau’s treatment of race. The bureau is currently reconsidering how it formulates its questions about race for the 2020 census. 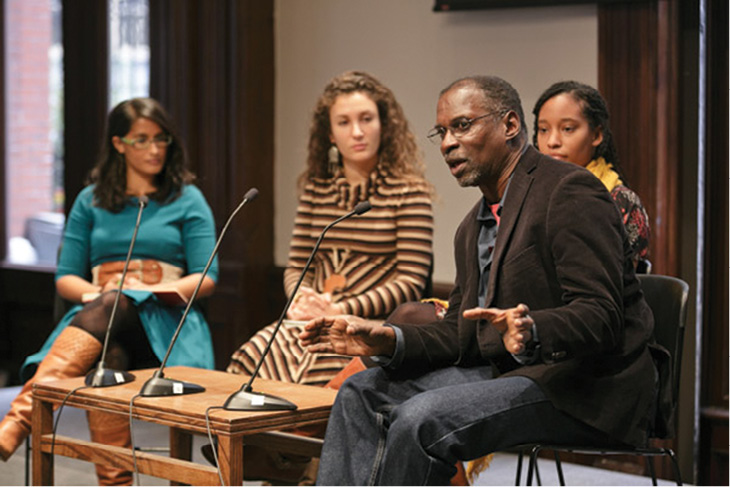 This photo was taken at the Brooklyn Historical Society’s annual What Are You? program in 2013. For more information about the event, visit cbbg.brooklynhistory.org/blog/photos-3rd-annual-what-are-you.

According to Schwartz, teachers have been especially responsive to the project, since many of their students “understand themselves in that framework”—that is, as being of mixed heritage. “Teachers have told us that the issue of racial identity and racism exists in the world in a very real way, but there are not very easy ways or very many models for teachers for how to lead a constructive conversation with their students about these issues.” For this reason, BHS is now developing a curriculum that these teachers can share with their students “to start conversations, to model what it means to do a sensitive interview, perhaps with family members or with other people.”

School programs have been set up in New York to help students resolve conflicts related to bias, but Schwartz said that the BHS project “provides students and teachers with something very concrete that is outside their immediate urgent situation.” When students focus on an oral history in which the interviewee describes the struggles they have had as a result of their heritage, “it takes it away from this being just about you, and it puts it into a larger context of ‘Well, look at that! This is not something that I experienced in isolation. It’s not just me.’ It’s an issue that we have an obligation to grapple with as a larger society. It’s our hope that our curriculum gives teachers some of the tools, some of the questions—some of them are materials they might use to let the students explore this in a constructive way.”