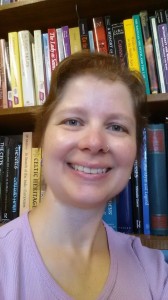 Máire Johnson is a visiting assistant professor of medieval Europe at Elizabethtown College. She lives in Elizabethtown, Pennsylvania, and has been a member since 2009.

Fields of interest: medieval Celtic regions (most of my work involves Ireland, but I am also interested in Wales, the Isle of Man, Brittany, Scotland, and Cornwall) and their relationships to non-Celtic Europe, medieval vernacular law (especially that of Ireland) and its intersection with other written genres (including hagiography), medieval magic and its persistent representations in modern culture, gender roles and their representation in early Celtic literature, and medievalism in modern culture

I’m not entirely sure, to be honest. I think I was a child; my father used to read to me at bedtime, as many fathers do, but rather than reading Goodnight Moon or the like, he read Loren Eiseley’s The Incredible Journey and Joan Aiken’s Smoke from Cromwell’s Time. I was captivated by the impact the past—whether in the field of history or that of anthropology—can and continues to have on the present and on the future. In junior high and high school, I found myself particularly drawn to those stories related to the Middle Ages; I was attracted, I think, by the combination of the familiar and the foreign, as well as by the ways in which modern medievalism tries to simultaneously recreate an idealized past and to make that idealized past the realm in which we seem to try to work out today’s difficulties.

And yet I had been told repeatedly that history wasn’t a practical field to enter, that it was cutthroat, publish-or-perish, and only the very elites of the field would actually succeed. So my first baccalaureate was in the sciences, from which I’d intended to emerge able to undertake field and lab studies in conservation biology. Unfortunately, I was struck by serious illness and unable to follow through with those plans. When I had recovered sufficiently to return to work, I was (at that time) unable to withstand either the rigors of field research or the chemicals of laboratory work, so I returned to my first love, that of history. During the course of those studies, I wrote an undergraduate thesis on the subject of “Magic in Ancient and Medieval Ireland” that was quite on the idealistic side, I’m afraid, but my professor offered kind and encouraging criticism. On the cover of the thesis, she wrote the comment that perhaps I should publish on the subject of medieval Ireland as that might “wean me of some of my obsession.” I did publish about medieval Ireland … but it has only intensified my interest ever since.

I’m in the process of revising my book manuscript, Human Yet Holy: Heroic Sanctity in the Lives of Ireland’s Saints. The manuscript has already been reviewed at Boydell & Brewer, and the commentary that I received is being used to refine the book’s structure for resubmission later this year. I have a paper under way concerning the competition apparent between a particular early vita of the Irish saint Áed of Rahugh and the so-called Vita Prima of the premiere female saint of Ireland, Brigit of Kildare; a preliminary version will be presented at the Southeastern Medieval Association in Georgia, October 16-18. I’m in the research stages on two essays due to be included in separate compilations in 2015. One of these examines the crossroads of gender and grief in the early literature of Ireland, while the other assesses the ways in which Irish hagiographers employed the tool of snark and sarcasm. I’m also preparing an article on the intersection of the Irish saga known as Táin Bó Cúailnge and the vita of Saint Samthann, as well as an essay on the ways in which depictions of holiness differ depending upon the language (whether Latin or Old/Middle Irish) used to write the saints’ Lives. A version of the latter paper will be given at the International Congress on Medieval Studies in Kalamazoo, May 2015.

In some ways, yes. I’ve become increasingly intrigued by the impact of disease in the course of human history, as well as finding myself drawn more to archaeology and art history as sources of additional evidence for subjects I’m researching. A project I have somewhat simmering on the back burner at present involves the study of the exhibitionist figure of Ireland known as the Sheela-na-gig, for example, which has taken me into an interdisciplinary crossroads of archaeology, architecture, art, and history. I’ve also become rather obsessed with Ireland’s medieval vernacular laws, and constantly find myself surprised at the ways in which aspects of legal thought crop up in apparently unrelated genres of Irish medieval evidence.

I have two favorite blogs, actually. One is Got Medieval and the other (to which I do not pay nearly enough attention) is Medieval News.

I think what makes the profession particularly valuable is its ability to take the events of peoples from different times and places and illustrate their relevance to us here today, even if that relevance is composed of all the ways in which there are differences. I also think that history is one of those professions that has a rather enviable ability to be extraordinarily interdisciplinary when it is given the opportunity to do so. History, to me, is the art and science of seeing new connections between discrete pieces of evidence and interpreting those connections for an audience in a way that not only offers insight into that specific subject, but potentially suggests modes of comparison for other areas as well. As such history sheds light on what has gone before, to be sure, but in looking to our medieval past we gain increased understanding about who we are in today’s world too.

To be honest, at first it was because I was invited to an interview at an AHA conference! However, once I had attended that conference and had the pleasure of interacting with colleagues in the profession from fields often considerably different from my own, I continued to maintain my membership. I find the opportunity to engage in scholastic debate with those outside of my own particular subfield stimulating and eminently enjoyable.

Yes … in the New Orleans AHA meeting a couple of years ago, I had the unmitigated pleasure of being present at a talk given by the eminent late antiquitist, Peter Brown. I was very much interested in his discussion, but I must confess that what stuck with me was an explanation he gave about what leads him down particular research roads. He said (and I paraphrase here to the best of my recall) that as he’s working on one thing, he’ll come across some item that irritates him. It doesn’t seem to fit, or it cannot quite be explained, or perhaps it has been addressed in a way that doesn’t quite encompass it. He described how that irritation might be set aside while first one, then another project is completed, but said that eventually, the irritation grows to such an extent that he simply can no longer ignore it. I remain in solid agreement with Dr. Brown: much of my own work has also resulted from some “irritant” encountered while working on an entirely different subject!

Teaching, political engagement, birding, wildlife and natural resource conservation, and—particularly of late, though I do not yet own or live in one—the Tiny House movement as a means to reduce personal overhead, own my own home, and reduce my footprint.