A Free and Open Alternative to Traditional History Textbooks

The collision of technology and education incites hyperbole: digital utopians forever dream of an open world of free learning, while digital skeptics warn of privatized, profit-driven enterprises that privilege shallow instruction from
de-skilled educators. But beyond the dreams and beyond the nightmares, the digital humanities have created space for practical projects that address practical problems.

After a yearlong collaboration, over 350 historians have produced a beta edition of The American Yawp (www.americanyawp.com), a free and online, collaboratively built, open American history textbook designed for college-level history courses.

According to the Bureau of Labor Statistics, textbook prices have jumped fifteenfold over the past 40 years, three times the rate of inflation.1 The College Board has found that the typical student now spends $1,200 every year on textbooks and supplies.2 Despite shifting technological and pedagogical trends, community colleges and other educational institutions catering to nontraditional or first-generation college students still rely heavily on traditional textbooks: the very students least able to afford these ever-increasing costs are the most likely to bear them. This is a problem, but it is a problem with a solution. We believe The American Yawp and other open projects can alleviate the burden of soaring textbook costs by creating high-quality, free and open resources for all students, whether at community colleges, open-admissions universities, or elite research institutions.

We conceived of The American Yawp in the spring of 2013 while teaching at various colleges in the greater Houston area. Frustrated by the high cost of textbooks but failing to find an academically rigorous, cheap alternative, we sought to embrace new models for the creation and distribution of textbooks.

We approached the project with three overriding principles: first, to provide a free and truly open resource for students and educators; second, to maintain the highest standards of our discipline; and, third, to use collaboration and institution-free spaces to create a “living” resource that can ultimately expand the pedagogical horizons of traditional textbooks.

Unchecked by profit motives or business models, we set out to balance the promise of open resources with the rigors of academic review. With the help of an advisory board composed of leading American historians and pioneers in the digital humanities, we recruited hundreds of experienced scholars and college-level instructors who were not only sympathetic to the project’s mission, but also willing to volunteer their expertise. We were overwhelmed by positive feedback. And so we went to work.

We believed that a narrative synthesis could emerge through the many innovations of our profession’s various subfields no less than through a preselected central theme. This is, in fact, a reflection of how our profession already works. We therefore gave the first draft to subfield specialists to ensure that the text would reflect the cutting edge of scholarship. Over 300 historians collaborated during the 2013–14 academic year to produce text and images that a team of editors then wove together into cohesive chapters.

The full project is now available online as an open beta for the 2014–15 academic year. Several hundred students are already using the text, but users and academics are encouraged to offer feedback and engage in conversation through a parallel Comment Press platform that is linked to in each of the chapters. After this round of feedback and subsequent editing, the Yawp will re-launch in time for the 2015–16 academic year, at which point a second, concurrent phase will commence to broaden the project by incorporating additional media, interactive materials, and pedagogical resources, allowing for a “living” project that engages emerging pedagogical trends. 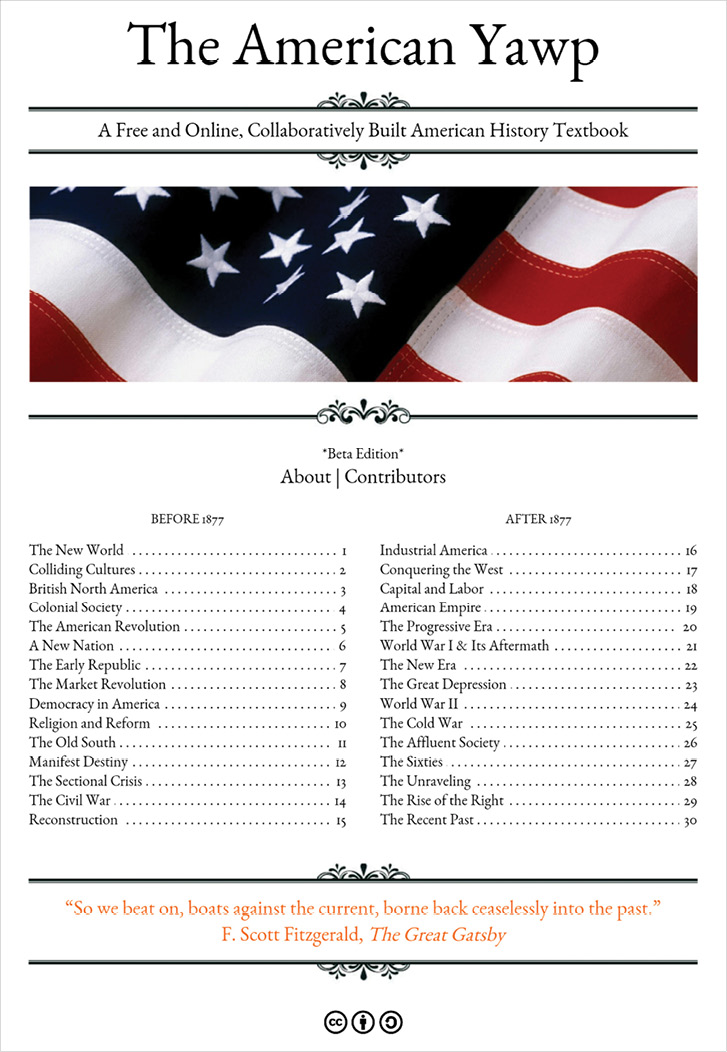 The American Yawp is a fully open resource: users are encouraged to use it, download it, distribute it, and modify it (on their own) as they see fit. The project is formally operated under a Creative Commons Attribution-Share Alike 4.0 International (CC-BY-SA) License and is designed to meet definitions of a “Free Cultural Work.” And yet, as we embarked upon the project we were also extremely conscious of suspicions surrounding open resources. The last annual “Teaching and Textbooks” roundtable in the Journal of American History, for instance, discussed the future of textbooks in American history courses, but rather than tout the promise of open resources, this forum cited only the unreliability of existing projects. New corporate models of online education might only inflame such suspicions, but the pedagogical shortcomings of MOOCs and the pernicious growth of online, for-profit educational institutions need not distract us from the promise of technology. By utilizing the collective expertise of our profession, we can build resources that are free and open without sacrificing scholarly rigor.

The title, The American Yawp, was chosen to capture a vibrant past. Even excellent textbooks struggle to encapsulate American history. Some organize around themes—“The American Promise,” “The Story of American Freedom”—while others surrender to the impossibility of synthesis and retreat toward generality—“America’s History,” “The American People.” But in the oft-cited lines of the American poet Walt Whitman, we found as good an organizing principle as any other: “I too am not a bit tamed—I too am untranslatable,” he wrote, “I sound my barbaric yawp over the roofs of the world.” Long before Whitman and long after, Americans have sung something collectively amid the deafening roar of their many individual voices. The American Yawp offers the story of that barbaric, untranslatable yawp by finding both chorus and cacophony, together, as one. Without losing sight of politics and power, The American Yawp incorporates transnational perspectives, integrates diverse voices, recovers narratives of resistance, and explores the complex process of cultural creation. It looks for America in crowded slave cabins, bustling markets, congested tenements, and marbled halls. It navigates between maternity wards, prisons, streets, bars, and boardrooms. Whitman’s America, like ours, cut across the narrow boundaries that strangle many narratives. Balancing academic rigor with popular readability, The American Yawp offers a multilayered, democratic alternative to the American past that is available freely for all.

Managing such a large project taught us much about the opportunities and challenges of online productions. After testing alternative models for collaborative online text creation, we embraced the promise of large-scale, managed crowdsourcing. Designed to balance the collaborative promise of open-source models with the reliability of traditional peer-review processes, the Yawp tackled one of the perennial problems of digital project management with a mediated “ajar-sourced” model of content production and dissemination. We relied upon a large and diverse yet loosely coordinated group of experienced contributors and advisors to construct a coherent and accessible narrative from all the best of recent historical scholarship. But we also found that tangible human networks and real-world connections helped to sustain the otherwise anonymous world of digital content production. As we move forward, we are eager to expand that network. Whether it’s through the Yawp or another project, we hope that American historians will continue exploring ways to offer students quality projects that eliminate costs and expand pedagogical possibilities.

Higher education too often does more to exacerbate economic inequality than to redress it. And with no end to soaring costs in sight, it falls upon us in the profession to find ways to keep costs low for our students. The American Yawp, we hope, can point one way forward.

2. The College Board, Trends in College Pricing (2013), https://trends.collegeboard.org/college-pricing.