Today’s What We’re Reading features historians shining brightly on the Daily Show, new closures at the National Archives, turning GIFs into a language, flaming cats, and much more!

AHA members Eric Foner, Manisha Sinha, and James Oakes were on the Daily Show last night, in “The Weakest Lincoln” with Andrew Napolitano.

Eduardo Obregón Pagán tells the Chronicle, “We’ve really missed key opportunities to take what’s fascinating about what we know and share it with the public.”

The Delusions of an American Technopolis

A Remapping Debate series on why San Jose, California, the center of the US technology industry and one of the wealthiest cities in the nation, struggles to fund public services. Part II takes a historical perspective and argues that this imbalance predates the tech boom.

Medieval Muslim women were sultans, state librarians, and religious scholars. Read about them and other distinguished Muslim women, and see paintings depicting them, on the blog Ballandalus.

Has Anyone Ever Lived on the National Mall?

Part of a much larger project to tell the history of the National Mall in a new website from the Roy Rosenzweig Center for History and New Media.

DC’s Complexion is Changing. Will the Next Mayor Reflect That?

The Washington Post includes extensive comments from historian George Derek Musgrove in its article on the shifting demographics in DC and what that means for local politics.

Glimpsing Jewish Memories amid the Mellahs of Morocco

A photo essay in the Times of Israel.

Resource: The Acts of Parliament

British historian John Levin provides an excellent discussion of the issues involved in digitizing and discovering statues, and organizes some links to resources for legal historians.

Five Things You Need to Know to Be a Better Preservationist

Historian William Thomas and Leslie Johnston from the Library of Congress offer some tips on how digital history projects can be preserved and maintained.

Facilities in Anchorage, Philadelphia, and Forth Worth will undergo changes “As part of ongoing budget adjustments.” Via Alaska Public Media, Senator Lisa Murkowski (R-AK) suggests NARA should sell the land it owns in Anchorage and use the money to complete the digitization of the Alaska collection.

Don’t Quote Me on This

Maria Konnikova discusses the problems with relying on quotations, arguing, “Words themselves become decorative—evocative, perhaps, but denuded of their essence.”

These MIT Researchers Want to Turn GIFs into a Language

“I want people to be able to put in a Shakespearian sonnet and get out a GIF set.”

An article by Jen Howard in the Chronicle of Higher Education (gated for Chronicle subscribers) about face-to-face peer review done in workshops at the Mercatus Center at George Mason University. 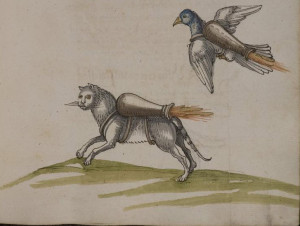 Why Do 16th-Century Manuscripts Show Cats with Flaming Backpacks?

Brad Scriber at National Geographic has an answer, with illustrations.

This Guy Drew a Cat. You Won’t Believe What Happened 4 Centuries Later.

The Chronicle reports on how a 400-year-old illustrated manual on pyrotechnic weapons went viral, twice, and gets bonus points for writing an UpWorthy-style headline.