The Obligations of Citizenship and the Limits of Expertise: AHA Session 61

If you haven’t seen Stanley Fish in a while, I’ll tell you this: the man has not lost a step. He’s as puckish and provocative as ever. One of four panelists at the annual meeting’s Session 61, “Historical Expertise and Political Authority,” Fish (visiting professor of law at Cardozo Law School) carved out a spot by and for himself with his usual gusto, and I’ll spare you any suspense: historians do not have useful expertise to offer democratic politics. As individual citizens, they might; as distinguished historians, they do not. “Being right on a matter of historical fact does not make you right or even relevant” on the matter of a candidate’s fitness for office or an election’s likely consequences. “Our academic credentials do not extend to that area,” Fish has decided; therefore, “no deference is due” our opinions there. Historians, he said, “are not qualified—as historians—to tell me what lever to pull when I enter the ballot box.” More broadly: when academics attempt to sway voters, “they are no longer acting as academics.” Further still, “they have soiled the credentials they wave around like a flag.” Well then. 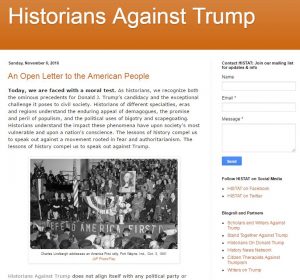 Historians Against Trump inspired a controversy over whether historians should publicly offer political opinions.

You might wonder what gave rise to such invective? An open letter, apparently—first published on July 11, 2016; finally signed by 1,000 scholars, graduate students and teachers, many of them historians; and consisting of six paragraphs proposing that Donald J. Trump is unfit to be president and poses a grave threat to the social fabric and political traditions of the nation he plans to lead. “Historians of different specialties, eras and regions,” the letter begins, affiliated herein with neither political party, nevertheless saw in Trump’s rise “the enduring appeal of demagogues, the promise and peril of populism, and the political uses of bigotry and scapegoating.” Believing that the “lessons of history” compelled them “to speak out against a movement rooted in fear and authoritarianism,” the signatories urged all Americans to join them in “standing up to Trump” and working to build an “inclusive civil society” instead. In short, “the lessons of history compel us to speak out against Trump.” In turn, their essay compelled Professor Fish to write his own. Published on July 15 in the New York Times and titled “Professors, Stop Opining About Trump,” it took the letter-writers to task for reasons resembling those quoted above.

The Times piece generated more than 400 further opinions, in the form of reader comments, only “eleven of which” by Fish’s count (I have not gone back to check his math) “were positive—the rest were hostile, dismissive, and angry.” Deliberately or not, Fish had succeeded in calling attention to the very document he disparaged. Judging by the response of Jacqueline Jones (panelist and prize-winning historian from University of Texas at Austin), I was not the only historian alerted to the letter by Fish’s noisy objection to it. “Clearly we should thank Professor Fish for bringing it to people’s attention,” Jones said, “otherwise it would have sunk” without trace. Though Jones hadn’t signed either (in truth, not one of the panelists had—AHA Today welcomes comments from any historians who did sign and would like to clarify, defend, amend or expand on their aims), she found it “pretty innocuous.” The same cannot be said for her feelings about the candidacy of Donald Trump. Bringing her historical expertise to bear on his plans to “make America great again”—a slogan that, as panel chair and AHA executive director James Grossman has noted, “is a historical statement”—Jones “pinpointed two times” that Trump invoked most frequently on the campaign trail: “the early 20th century and the decades of the [19]40s and 50s,” each viewed by the Trump campaign as “halcyon times for the American people.” Jones sees the early 20th century differently: as a time “when lynching was in its height, when no women could vote, and when most black men were disenfranchised.” The decades following the Second World War stand out in her mind as an era “when the State still sanctioned segregation and racial prejudice.” Going forward, contra-Fish, Jones believes that as historians “we have no choice but to enter the political arena.” How? “Avoid euphemisms. Discuss precedents . . . remain vigilant.” Remember that a successful democracy “demands an informed and responsible electorate” and that “fake news today is fake history tomorrow.”

So far: one vote for historians participating in electoral politics; one vote against. The two remaining panelists shared Jones’ sense of civic obligation but seemed more chastened than outraged by the results of the 2016 election. Jonathan Zimmerman—historian at the University of Pennsylvania and frequent contributor to editorial pages on issues great and small—objected not to the letter’s existence (believing that historians “add something absolutely vital” to our shared political life) but to its tone. Zimmerman “was in no way opposed to historians arguing against Trump,” but found himself “repelled by the words in the statement” suggesting that Trump represented “an attack on ‘our’ profession and values.” The letter’s language fell into what Zimmerman calls “the fallacy of the ‘we.’” Avowing that he would “yield to nobody in how repulsed I am by Donald Trump,” Zimmerman nonetheless believes that “reasonable and decent and informed people can draw conclusions quite different than my own,” a fact that the historians’ letter distinctly “did not acknowledge.” In its reference to “the communities we serve,” the letter gave no hint that “one of those communities is people that voted for Donald J. Trump.” Zimmerman worries that in departments across the country, “we talk a very good game about listening to diverse voices,” but that in practice “our profession is something of a sham,” in which “we mock or disdain voices we don’t like.” Believing that “the worst feature of our political landscape” is its increasing polarization, Zimmerman woke up on November 9 overcome by “shame at how rigidly I had isolated myself” within a bubble of people who “shared my point of view.” Going forward, he will work harder “to understand people who disagree with me.”

Concluding remarks by Steven Conn (historian at Miami University in Ohio) provided the panel with valuable synthesis. Like Jones and Zimmerman, Conn trusts that “historians have much to add to political conversation with their particular expertise.” But he’d come “neither to bury Stanley nor to praise him.” Instead, Conn quoted from former US Representative Barney Frank’s memoir: “If you care deeply about an issue, and are engaged in group activity on its behalf that is fun and inspiring and heightens your sense of solidarity with others, you are almost certainly not doing your cause any good.” In other words, for historians looking to have an impact on policy, preaching to the choir—or, worse yet, assuming the choir’s ideological uniformity—will not suffice. In a late November column excoriating another letter published by an academic in defiance of Donald Trump, Fish objected to the writer’s use of “the first person plural ‘we’re’”—the pronoun suggesting “a fellowship” between a teacher and her students “by claiming a knowledge she couldn’t possibly have.” In other words, here Conn could find common ground (which is not to say a common creed) with Fish, with Zimmerman (“the fallacy of the ‘we’”), and for that matter, with the outgoing President of the United States, whose farewell address exhorted “ordinary people”—a category that surely includes historians—to “get involved” and “get engaged” while simultaneously counseling against the urge “to retreat into our own bubbles, whether in our neighborhoods or on college campuses”—even in our annual meeting.

A video of this session will soon be available on the AHA’s YouTube channel.