Whether this is your first or fiftieth annual meeting, you can probably pick out a favorite moment from the familiar flurry of activities. Perhaps it was the time you spotted an old friend, presented your new research after months of anticipation, or listened to someone who forever changed your perspective on a topic. We asked this year’s attendees to tell us the highlights—personal or professional—of their snowy weekend in the Mile High City:

Jack Remaley is 96 years old and trained as an engineer—probably one of the more unusual examples of an annual meeting attendee. So what brings him to the meeting? His companion, Gloria Main, says, “He’s married to a historian and he couldn’t figure out what it was I really do. I dragged him here so he could get a sense of the enormous diversity of topics, which I think he now understands!” Main received her PhD in 1972 after she was already a mother of three, and acknowledges that she herself wasn’t considered to be a “typical” kind of historian at her first annual meetings. She says, however, “History [as a profession] has changed a lot, which is a good thing!”

Remaley particularly enjoyed touring the Exhibit Hall and was drawn to books on Japanese history because he served in World War II. He jests to his wife, “I’m beyond the point of having fun. But there are so many interesting things here!” 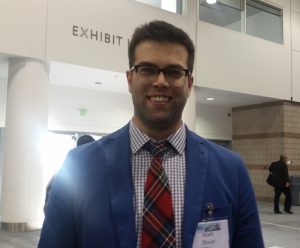 Mark Dixon holds of the distinction of having submitted one of the winning entries for AHA17’s “Name that Cocktail” contest. “I have a memory that’s sort of silly,” he says. “I got to see Twitter celebrities that I follow in person for the first time. Oh there’s @AHAhistorians! There’s the Tattooed Prof!” Dixon, who studies at the Princeton Theological Seminary, also appreciates the multi-disciplinary nature of the program. “I enjoyed the ASCH (American Society of Church History) sessions. It is sort of fun to go right from an AHA session on transatlantic slavery to an ASCH session on the Reformation today.” 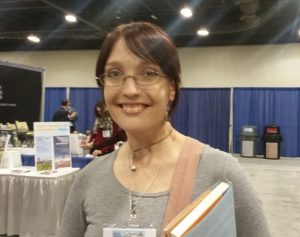 Micaela Cruce and Marie von Haas, both members of the University of Colorado Denver’s student group, are grateful that the meeting was held in a western city this year. Cruce says, “I think my favorite part is seeing so many people gathered in one place. I’m an undergrad, so this is not what I am used to! This is an incredible opportunity, and I am just overjoyed.” 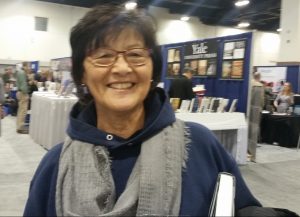 Von Haas is a graduate student and gestures at the size of the Exhibit Hall. “It amazes me the amount of work that goes into putting an AHA meeting on. That is more impressionable to me than what is actually in here!” As a Colorado resident, she apologizes for the snowstorm. “We tried to conjure up good weather for you!” 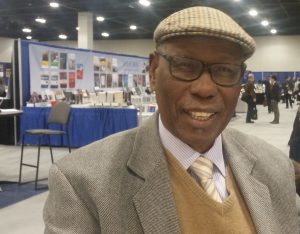 Boubakar Barry was honored with an AHA’s Honorary Foreign Membership at the Awards Ceremony on Thursday night, but perhaps he should win another prize for furthest distance traveled. Barry has lived and worked for much of his life in Senegal. Because he does not often have the chance to come to the United States, the meeting brought many special reunions. “I have known some of these people for 40 years, 45 years. I didn’t realize how important the award was. It was emotional.” After the meeting, Barry looks forward to spending a month in Florida to visit his grandsons. He shares a touching story: “My first day at breakfast here, one of the gentlemen working there jumped on me and said, ‘oh you look so like my grandfather.’ I’m at home everywhere!”

Do you have a favorite memory from the meeting? Let us know below in the comments section, or on Twitter!