Who do you call if you spot a pigeon flying around in the Job Center at the AHA’s annual meeting? Or when you go to that much-awaited session with your favorite historian on it, only to find that the sound system is mysteriously projecting into the room next door? Chances are that the person who steps in will be Debbie Doyle. Most AHA members know that the annual meeting is huge and complicated (on average, our meeting attracts 4,000 historians), but few are aware of how all the moving parts come together—or even how many moving parts there are. Even fewer know the person behind the scenes who makes it all possible. 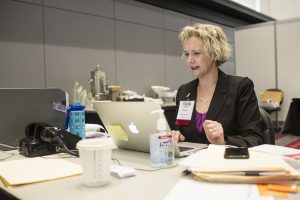 As the AHA’s meetings coordinator, Debbie Doyle handles details large and small. From visiting cities around the country to find the cities to host our meeting to determining whether the welcome reception should serve chicken on a stick or hummus with carrots or both, Doyle is the woman in charge, both at the meeting and in the months and years leading up to one. It might surprise some of our members to know exactly how far in advance AHA meetings are planned. The 2017 hotel contracts in Denver, for example, were signed way back in 2012. Doyle notes that this is so the AHA can get the best rates and ensure availability. In fact, scouting cities to host the annual meeting, she says, is one of the hardest aspects of her job: “We need a city that can give us at least 2,500 hotel rooms on our peak night which is Friday, and that has meeting spaces and hotels that are close to one another. We also try to pick airport hubs and cities that people want to go to . . . we always do really well in New York, for example. We try to alternate between different regions around the country, but we do avoid places where some of our members might be subject to discrimination.” In the past few months, Doyle’s quest to find host cities has taken her to San Francisco, Seattle, and Philadelphia. (The AHA has already signed contracts until 2025, so AHA Today readers can look forward to attending a meeting in all three of these cities in the 2020s.)

Developing the session schedule with the Program Committee, made up of scholars from across the discipline, is another challenging aspect of Doyle’s job. The committee reviews every proposal submitted to the AHA and, in addition, recruits 10 percent of all sessions that make it onto the program. Working with the committee, Doyle schedules each session and assigns it a room. Nobody wants to see ALL the women’s history panels scheduled simultaneously on Thursday at 3:30 p.m., and part of Doyle’s job is to avoid precisely that. As a history PhD, this is also the part of the job that Doyle finds most intellectually challenging: “I ask the Program Committee to spread the sessions out by topic when they draft the schedule. In the past we used to divide up sessions geographically, but now because the discipline has gotten so much more diverse, we try and identify sessions that are topically similar even though they may be geographically apart.” Eventually, it falls on Doyle’s shoulders to ensure that each time slot at the meeting represents the diversity of the history discipline. Doyle explains that she and the Program Committee try to schedule sessions on Sundays that might encourage people to stick around for the last day of the meeting.

Doyle also coordinates much of the day-to-day routine tasks that are essential to managing the juggernaut that is the annual meeting. There is no task big or small—whether it is working with venues, ordering food for receptions, or coordinating dozens of graduate student workers who check on sessions during the meeting, the AHA counts on Doyle to ensure that the meeting runs without a glitch. The graduate student workers, in particular, are a crucial component. They report problems—water pitchers that need to be refilled, presenters who need an adapter to connect their Mac to the LCD projector, and that pigeon (which eventually left on its own; Doyle is pretty certain that it did not submit a CV).

Some of what Doyle does, however, is bigger than logistics. “We’re trying to think of how we can move our annual meeting forward into the future. This year is our 131st annual meeting. For many years you had to go to the meeting to get interviewed for jobs in history departments. Interviewing is becoming less and less of a component of the meeting,” she says. As more people come to the meeting because they want to, and not because they have to, the AHA has an opportunity to rethink the meeting. “In this day and age of Internet communication and social media,” Doyle says, “historians still value face-to-face meetings. How do we take advantage of that? And how do we take advantage of the fact that the meeting brings together historians from every part of the discipline?” The Council Committee on the Annual Meeting is actively involved in this process of rethinking the meeting. In fact, attendees at AHA17 probably noticed some of these changes that have been brewing slowly, but surely, over the past few years: an increase in professional development opportunities geared toward historians interested in careers both within and beyond the academy, more workshops, a greater diversity of networking opportunities including receptions for bloggers and Twitterstorians and K–12 teachers, a wider selection of tours, and more plenaries placing contemporary events in historical context, among other things.

So what does Doyle do once the meeting is over? “Sleep,” she says. After that, it all begins again—Doyle has already scheduled her first call with the 2019 Program Committee before the end of the month.

Debbie Doyle is meetings coordinator at the AHA. You can find her in the AHA Headquarters Office during the annual meeting.