Felipe Hinojosa is an associate professor at Texas A&M University. He lives in College Station, Texas, and has been a member since 2008. 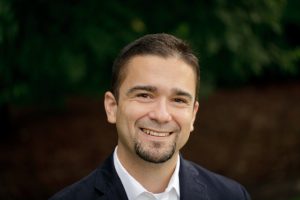 Describe your career path. What led you to where you are today? It really all starts with my family. My father, Conrado Hinojosa, was six years old when he immigrated with his family to the United States in 1946. My mother, Esther Tijerina, was born in Brownsville, Texas, and grew up attending Iglesia Metodista Unida El Buen Pastor. After my parents married they joined the migrant trail up to Traverse City, Michigan, to pick cherries; Archbold, Ohio, to pick tomatoes; and many other spots along the way from South Texas to the Midwest. So it goes without saying that I grew up in a family where stories, politics, laughter, work, and faith all went together. Where I am today, and the reason why I write about religious politics, has everything to do with the experiences of my parents as immigrants, workers, and people of faith. But, to be honest, when I started graduate school I did not envision myself as a history professor. When I enrolled in the MA program in history at UT Pan American (UTPA) in Edinburg, Texas, in 2001, I did so out of a desire to learn more about my community’s history. My goals back then were to become a high school history teacher and coach varsity football. But my experience at UTPA changed everything. I met some amazing faculty and students who encouraged me to continue my education and pursue the PhD, which was something that I had never considered. I applied to several PhD programs, but when I visited the University of Houston (UH) I knew that was the place for me. The history department at the University of Houston taught me not only how to be a professional historian, but also the importance of forging a community of scholars that values collaboration over competition. My mentors, professors, and peers prepared me for where I am today at Texas A&M University.

What do you like the most about where you live and work? The thing I love most about where I live is that I am a short drive away from Houston and Austin and a six-hour drive from my beloved Rio Grande Valley—the place where I grew up and where most of my family lives. College Station is different demographically and politically from the Rio Grande Valley, and while I miss the familiar sounds, foods, and sense of community I had there, there is so much I appreciate about College Station. It has a great school system—with a fantastic dual-language program that my kids are enrolled in—and it is a community with more political diversity than it’s given credit for. At Texas A&M University we have students that are intellectually and politically engaged and my interactions with them—whether on a march across campus to fight for in-state tuition for undocumented students or in organizing with them for a minor program in Latina/o Studies—are what I love the most about my job. I also love that I am part of a history department at Texas A&M with brilliant colleagues who are collaborative and supportive, and whose work inspires me to be a better scholar and historian.

What projects are you currently working on? I am currently working on a book project tentatively titled “Apostles of Change: Latinos and the Transformation of Religion in the United States.” My research starts in the years after WWII and goes through the Sanctuary Movement in the 1980s to understand the themes, politics, and religiosity that Latina/o communities have infused into US religion. The history of Latina/o religious politics remains understudied even as an overwhelming number of Latina/os affirm their beliefs as Pentecostals, Baptists, Mormons, and Mennonites.

Have your interests evolved since graduation? If so, how? In some ways they have. My dissertation and what later became my first book, Latino Mennonites: Civil Rights, Faith, and Evangelical Culture (2014), was focused on the religious politics found within one particular religious tradition. That work has motivated me to examine the broader themes of multiple religious groups and the interactions of Latina/os with other communities of color. I am also working on research projects that are not necessarily focused on religion, but that in a similar way speak to the Latina/o experience in the United States. One project on Mexican American foodways and another on high school football in South Texas focus on areas that I never considered in graduate school but I have now done some preliminary research for. I actually cannot wait to start working full time on those projects.

What’s the most fascinating thing you’ve ever found at the archives or while doing research? That would undoubtedly be the reel-to-reel audio recordings of the 1972 Cross Cultural Youth Convention in Epworth Forest, Indiana, organized by the Minority Ministries Council (Mennonite Church). The recordings have the voices of over 100 black and brown youth singing worship music in Spanish and English, the sermons of Mexican American, African American, Puerto Rican, and Native American preachers covering the conference theme of faith and racial identity. The recordings also include some of the breakout sessions at the conference that covered themes such as “machismo,” “Puerto Rican independence,” and “Chicano politics.” I will never forget that moment because the recordings put voices to the documents I was reading and they helped me better understand the emotional urgency of these religious activists. I remember sitting in the archives in Goshen, Indiana, listening to the voices and the music and thinking to myself: “This is exactly what I need to write about, this is my project.” It was a great feeling.

Is there an article, book, movie, blog, etc. that you could recommend to fellow AHA members? I have to start with recommending Michelle Serros’s book, Chicana Falsa and Other Stories of Death, Identity, and Oxnard. In particular, read the story “Attention Shoppers.” Read it out loud to yourself and then read it to your students. Brilliant.

Oscar Casares’s book Brownsville is also one of my favorites. Not only because it covers stories from my hometown, but because Casares gets the code-switching right and his writing on love, poverty, and culture is on point. Go out and get your copy.

Paula Moya’s work Learning from Experience: Minority Identities, Multicultural Struggles (and actually anything else by Paula Moya) continues to be extremely helpful to me in my work on religious identities. Moya’s work in general has made me a better historian.

And because I sometimes read poetry at the start of my classes (especially because it helps remind me and my students what is important and what matters), I recommend Nikki Giovanni’s Love Poems.

What do you value most about the history discipline? I value our knack for storytelling and I value how studying and writing history helps us make sense of the world.