Last week saw President Obama deliver the last State of the Union of his presidency, and within its first two minutes he confronted a fear weighing heavily on the minds of voters. 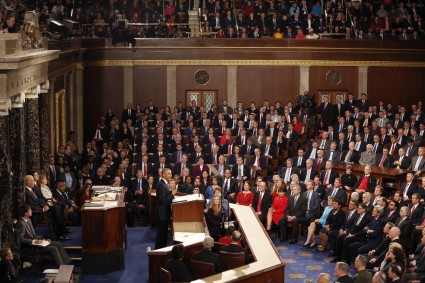 US President Barack Obama delivered his final State of the Union address on January 12, 2016. Whitehouse.gov.

Variations on the word “terror” then came up eight more times in his speech without ever quite being defined. It is that kind of term. Much like “obscenity” in Jacobellis v. Ohio—the 1964 Supreme Court case in which Justice Potter Stewart described pornography this way: “I know it when I see it”—terrorism is the sort of word used frequently in public discussion without ever quite being defined.

Questions of definition preoccupy (for better or worse, depending on your tolerance for linguistic nuance) academic debate. This year’s annual meeting saw sessions defining “social needs,” global history, “home,” gender, modernity, and citizenship. But defining the central term of Saturday’s session on the history of terrorism possessed particular urgency. Violence has always been with us and it is by nature terrifying. But it is not always terrorism, and the distinction has consequences both for the sake of our understanding and our response.

Terrorism predates ISIL; it existed before September 11, 2001. Did it occur as far back as the Middle Ages? Not as we think of it, said panelist and Longwood University professor Steven Isaac. “Fear-generating” coercive violence certainly did, as did violence with a performative aspect, intended to reach and speak to a particular audience. Despite the anxiety that informs political debate in the 21st-century United States, Isaac reminded us (with a surprising, roguish grin) of the relative “peace and stability” of our time and place: “it used to be that everybody was fair game,” and everybody else was “a threat.” In fact, Isaac argued, medieval societies “lived with a level of fear” that made violence less conspicuous. The case of early American violence is murkier, said Middle Georgia State University historian Matt Jennings, who has nonetheless found terrorism to be “a crucial aspect of American history from the very beginning.” Certainly by the mid-19th century, whether at Harper’s Ferry in 1859 or in Russia of the 1860s and 70s, the contours of modern terrorism had already taken shape.

Panel chair Randy Law of Birmingham-Southern College defined those contours this way: terrorism is “symbolic violence directed against the few to influence the behavior of the many.” It is always a “communicative act” intended to convey a message, not degrade a military; “a flanking maneuver” designed to “provoke the enemy into acting so that its strength becomes a weakness … to provoke it into destroying itself.” Further, Law contended that any definition that did “not let us understand state terrorism as such is myopic,” from Nazi state terror to the Soviets to Rwanda. Leave instances of state terrorism aside, Law argued, and your definition could only ever be partial. On the other hand, he would dispense with the term terrorist, and consider instead ways that anarchists or insurgents (for instance) use terrorism.

Law characterized terrorism as “fundamentally a linguistic social construct.” In other words, “there is no terrorism without the act of calling it terrorism.” Panelist and Michigan State University professor Ann Larabee cautioned us from falling too far down this particular linguistic rabbit hole, but assured us that the work historians do can add real value to conversations about policing and political extremism, pointing to fellow panelist Rick Jensen of Louisiana Scholars’ College as a model. Jensen studies the international history of anarchist terrorism, and though he conceded that we will never “have a society without violence,” he described periods with more and less terrorism. Careful police intelligence aided in curbing terrorism at specific junctures in the 19th and 20th centuries, for instance, “but heavy-handed policing only worsened it.”

Law remained “leery of the word ‘lesson’”—insisting that “history doesn’t give us a blueprint”—but he too suggested that studies like Jensen’s could help “put our response to terrorism in a framework.” To steer clear of such a public discussion would be, to Law, an “abdication of responsibility.” Historians’ characteristic restraint (sometimes satirized, as Larabee was quick to note) could in this case be an asset, discouraging fellow citizens and elected leaders “from responding quickly based on limited information,” providing “some perspective,” and resisting that provocation into an “extreme reaction” in which “strength becomes a weakness” and we are lured “into destroying” ourselves.

This is a temptation that President Obama—a leader inclined to think historically—warned against on Tuesday night as well, in one of his final chances to sway the national narrative on terrorism. After duly acknowledging that “priority number one is protecting the American people and going after terrorist networks,” he obliquely addressed the imprecise and incendiary language being used in the current race to replace him. “The world will look to us to help solve these problems,” the president cautioned, “and our answer needs to be more than tough talk or calls to carpet-bomb civilians. That may work as a TV sound bite, but it doesn’t pass muster on the world stage.” Nor would such language pass muster in any undergraduate history course or a session at the annual meeting—further testament to the indispensability of the discipline.

Editor’s Note: This panel was filmed and later aired by C-SPAN on American History TV. You can watch the panel by visiting C-SPAN.org.