“A Historian Walks into an Archive . . .”: Humor and Historical Research

Historical research can be quite funny even when investigating a serious topic—there is humor to be found in documents, in people, and in the process. I study the intersection of religion and politics in the late 1940s and early 1950s, with a particular emphasis on nongovernmental organizations’ attempts to advance human and civil rights in the United States and at the newly formed United Nations. It is fascinating, to be sure, but often disheartening to examine prejudice—the early Cold War, with its racially tinged communist witch hunts, roiled with emotions including fear, frustration, and even desperation. Like most archival work, mine can be tedious sometimes: I utilize typically dull (but in triplicate!) government and nongovernmental organizational documents. These include lists of meeting attendees, membership rolls, status reports on legislative efforts, and other such riveting details. But even buried in the dry, indifferent sheaves of prose there are moments of hilarity—a snarky memo or a snide description of a political figure. Life and drama hides within the bureaucratic documents that I use. And observing humor in these documents can provide historians with two separate but equally important opportunities: to get a more holistic view of our subjects, and to endure the tedium inherent in archival work. 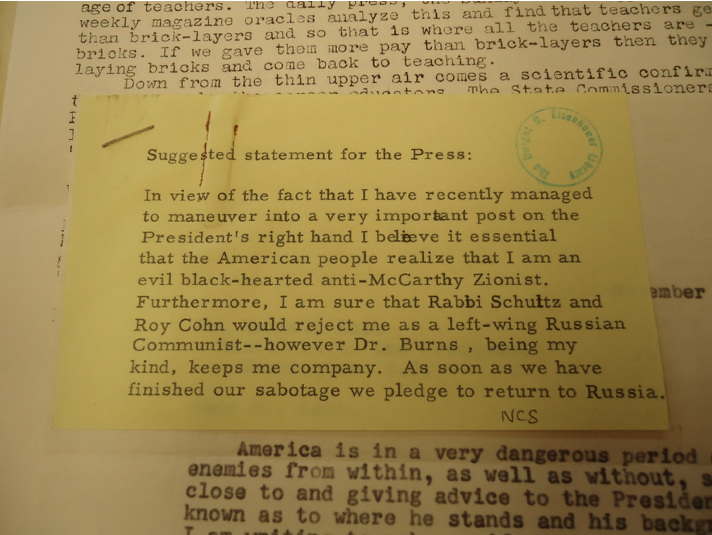 For example, while I was researching the reality versus rhetoric of religious pluralism in the 1950s, I visited the Dwight D. Eisenhower Presidential Library and experienced the thrill of being one of the first to look at Cabinet Secretary Max Rabb’s papers. Rabb handled minority affairs and, much to the consternation of right-wing radicals, was Jewish. After reading bulging folders full of letters and inflammatory publications claiming all Jews were communists intent on destroying America, I was astounded to find a darkly humorous note attached to one such anti-Semitic letter. Written by Rabb, the letter read: “Suggested statement for Press: In view of fact that I have recently managed to maneuver into a very important post on the President’s right hand I believe it essential that the American people realize that I am an evil black-hearted anti-McCarthy Zionist. . . . As soon as we have finished our sabotage we pledge to return to Russia.”[1] Oh, sarcasm after my own heart! 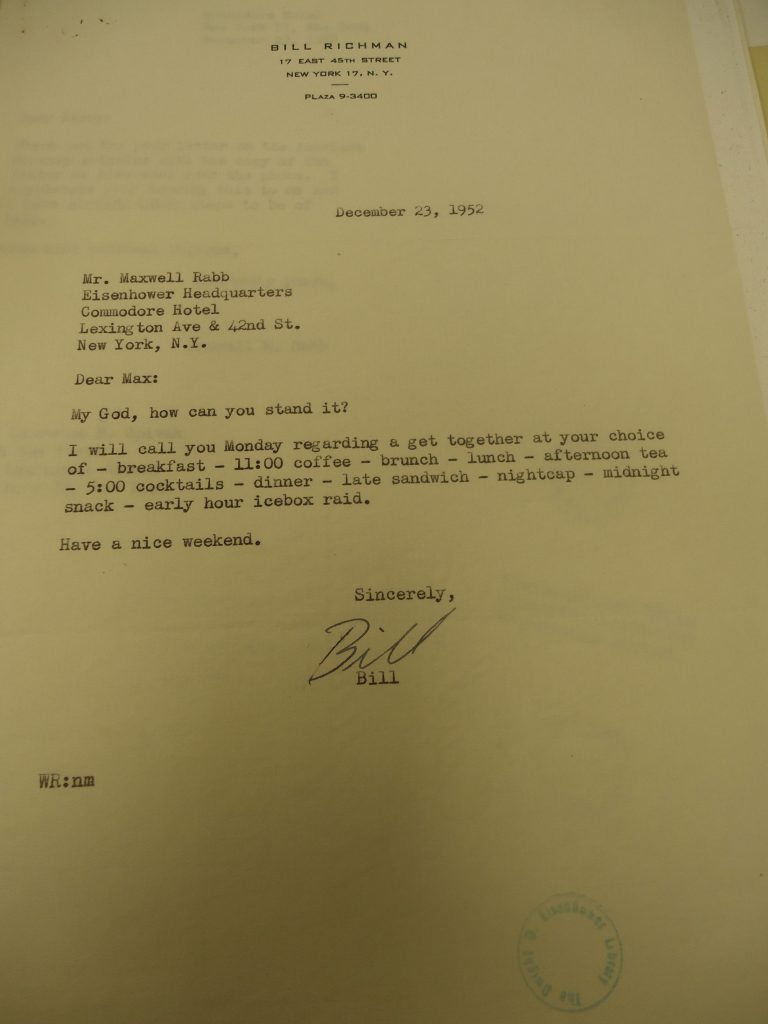 My thoughts sharpened by his good humor and very human frustration, I found in Rabb’s sarcasm a commentary on some of his fellow Americans, people primed to believe the worst and unlikely to engage in logical discussion. True, there may be no good reason to quote this document in my final account, but it helped me understand Rabb better as a person and provided insight into how he might have coped with the continuous stream of anti-Semitic propaganda that crossed his desk—after handling those boxes, I can attest that there was enough to make anyone snap. Rabb diffused that darkness with humor, offering a glimpse of the personality hidden behind all those dehumanizing files. From that point on, rather than view the papers as simple bureaucracy, I remained focused on the people that make an institution what it is.

Another entertaining moment came midway through a promising folder on the McCarran-Walter Immigration Act of 1952, which held mostly repetitive letters and statements. Just when I began to crave a break, a jolt of caffeine, or even a new set of eyeballs, the monotony was broken. Bill Richman sent a note to Rabb during the transitionary period between the election and inauguration that opened with, “My God, how can you stand it?” Then, proving Richman was the kind of friend we all need sometimes, he said that he would soon be in touch to arrange a meeting of Rabb’s choice: “breakfast — 11:00 coffee — brunch — lunch –afternoon tea — 5:00 cocktails — dinner — late sandwich — nightcap — midnight snack — early hour icebox raid.”[2] I sincerely hope Rabb opted for the late sandwich or the icebox raid.

Humor not only reminds historians of the humanity of our subjects, but it is also a useful tool that helps us successfully do our work. Finding humor in Max Rabb’s papers helped me remember that all of our institutions, even when they seem so very impersonal, are created and maintained by people who experience joys and frustrations. Having that empathy with my subjects helps me craft a history of government activity while still expressing the humanity buried within the bureaucracy.

Jennifer Vannette is a doctoral candidate in history at

Central Michigan University where she is currently writing her dissertation, “Aftermath of Genocide: The World Jewish Congress and the Fight for Human Rights.” Her fields of study include 20th-century US history and religious history. When not writing, she co-hosts the podcast I Was Told There’d Be Food, in which three grad students discuss all things related to academia and historical studies.