Stepping Out in Atlanta: A Self Guided Walking Tour from Your Hotel

This Stepping Out © guide was developed by Ren and Helen Davis and is adapted from their guidebook, Atlanta Walks: A Comprehensive Guide to Walking, Running, and Bicycling the Area's Scenic and Historic Locales, published by Peachtree Publishers.

Touring the Heart of Atlanta

At first glance, Atlanta appears as a city in a constant state of change where gleaming new towers continually reshape the skyline. Yet, at street level, vestiges of the past offer vivid reminders of a city that evolved from frontier village and Civil War target to transportation hub and commercial center.

It all began in 1833 when Hardy Ivy paid $225 for land that would now encompass nearly all of downtown Atlanta. Three years later, the Georgia legislature appropriated funds to establish a terminal point near Ivy's farm for a railroad line linking Augusta with Ross's Landing, Tennessee (now Chattanooga). In September 1837, Engineer Stephen Long pegged the "zero mile marker" near present day Underground Atlanta, and a rough and tumble railroad camp, dubbed "Terminus," grew up around it. Soon, tents were replaced by permanent structures and a village began to emerge. In 1842, the townspeople re-named the town "Marthasville" to honor the daughter of Georgia's governor. The city grew around intersecting railroad lines (a reason why downtown streets do not follow a traditional grid) and in 1847, citizens chose again to rename the town, christening it "Atlanta."

At the outbreak of the Civil War, Atlanta boasted a population of 10,000 and served as the transportation hub of the Deep South. In spring 1864, Maj. Gen. William T. Sherman led his federal army into Georgia with plans to take Atlanta and "march to the sea." For nearly three months, rebels doggedly fought to defend the city. Atlanta finally surrendered on September 2, 1864 and Sherman proclaimed in a telegram to Lincoln, "Atlanta is ours, and fairly won." Many historians believe that the city's capture assured Lincoln's reelection. Before abandoning the city, rebel troops destroyed ammunition trains, touching off fires that raged through the city. Much of what was not destroyed was later burned by federal troops before they departed for Savannah.

After the war, the railroads that made Atlanta a target fueled its recovery. Within a few years, it became the state capital, the railroad depot was rebuilt (now the oldest structure in downtown), and a new commercial district began appearing from the ashes of war. In 1887, this rebirth led to the adoption of a new city seal depicting the mythical phoenix arising from the flames with the inscription "RESURGENS." On the occasion of the dedication of the new state capitol building, Atlanta Constitution editor Henry Grady, spokesman for a "New South," proclaimed to audiences around the nation that "we have raised a brave and beautiful city...". More than a century later, Atlanta remains the transportation, commercial, and financial hub of the South; while taking its place as one of the nation's great cities. Superhighways have replaced railroad lines and millions of passengers now pass through Hartsfield-Jackson International Airport. Massive steel and glass cathedrals of commerce grace the skyline, yet in their shadow the visitor may still find traces of old Atlanta.

Peachtree Road follows a ridge line and the land slopes away to the east and west. The walk distance is about 3.5 miles.

Sites along the Way

*Note: "NR" indicates that a building is on the National Register of Historic Places; "NL" indicates a National Historic Landmark.

1. SACRED HEART CATHOLIC CHURCH (1897). 353 Peachtree Rd. Designed in a mix of Gothic and Romanesque styles, the church once anchored a complex that included a parochial school and hospital. NR

3. HARDY IVY PARK (1880s). Peachtree at West Peachtree. Named to honor Atlanta's first white settler, the park has been the symbolic entrance to downtown for more than a century. The park's centerpiece is the preserved facade of the early 20th century Carnegie Library.

4. CAPITAL CITY CLUB (1911). 7 Harris St. Built in the Beaux-Arts style by a private social club, the structure was intended to blend with the residences that lined Peachtree at the time. NR

5. PEACHTREE CENTER (1962, 1992). 230 Block of Peachtree St. The vision of architect John Portman, this sprawling multi-block complex connected by bridges and tunnels features commercial, exhibition, shopping, and dining spaces. Bridges link to the Hyatt and Marriott hotels and an escalator leads 200 feet below the surface to a granite-enclosed MARTA station.

6. WINECOFF BUILDING (1913). 176 Peachtree St. This commercial building with Beaux-Arts details was designed by New York architect William Stoddart for hotelier William Winecoff. Considered one of the city's finest hotels when it opened, the Winecoff has long been synonymous with tragedy. Early in the morning of December 7, 1946, a fire swept through the hotel leaving 119 people dead, including owner Winecoff. It remains, today, the worst hotel fire in U.S. history. After years of neglect, the building is under restoration.

7. GEORGIA PACIFIC BUILDING (1982). 133 Peachtree St. Headquarters of the international wood and paper products company, this massive, multi-tiered, pink granite skyscraper was designed by Skidmore, Owings, and Merrill. The building is on the site of the Loew's Grand Theater where Gone with the Wind made its world premiere in 1939. Across from the entrance is Margaret Mitchell Park, dedicated to the author. Inside the building is the High Museum's Folk Art and Photography Gallery. 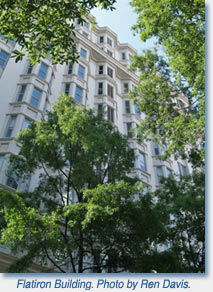 9. RHODES-HAVERTY BUILDING (1929). 134 Peachtree St. Designed by Pringle and Smith for furniture magnates Amos G. Rhodes and J. J. Haverty, this 21-story building with its blend of Byzantine and art deco motifs is an excellent example of the transition from classical to modern styles. This was the city's tallest building from 1929 to 1955. In 1992, it was converted to use as a hotel. NR

10. CANDLER BUILDING (1906). 127 Peachtree St. Asa G. Candler, founder of the Coca-Cola Company, spared no expense in this Murphy and Stewart-designed masterpiece of marble and terra-cotta. Step inside to view the exquisite bronze and marble accented lobby. NR

12. GRANT BUILDING (1898). 44 Broad St. Designed by the firm of Bruce and Morgan, this is an excellent example of what became known as the "Chicago style" of architecture. NR 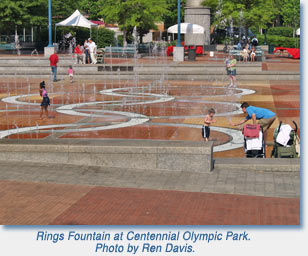 15. THE TABERNACLE (1910). 152 Luckie St. Once the city's largest Baptist church, the massive red-brick building is now a popular performance hall. 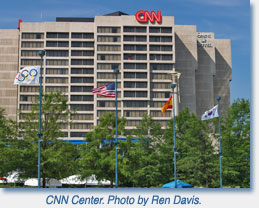 16. CENTENNIAL OLYMPIC PARK (1996). Marietta St. at Techwood Dr. The 21-acre park with the whimsical Rings Fountain was a gathering place for visitors during the 1996 Olympic Games. Adjacent to the park are the new Georgia Aquarium and Imagine It! The Children's Museum of Atlanta.

18. THE ATLANTA JOURNAL-CONSTITUTION BUILDING (1960s). 72 Marietta St. In the lobby of Atlanta's flagship newspaper are exhibits of some of the paper's most dramatic editions. In 1891, on Marietta at Forsyth St., the grateful citizens of Atlanta erected a statue in memory of Henry Grady, editor of the Atlanta Constitution and a tireless advocate for Atlanta's rebirth after the Civil War. 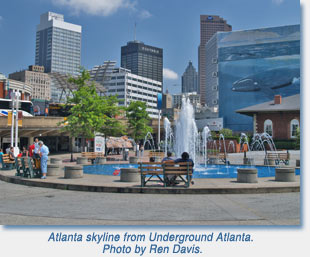 19. BANK OF AMERICA BUILDING (1901). 35 Broad St. Originally called the Empire Building, this was one of Atlanta's first steel-framed structures. In the 1930s, the first three floors were remodeled in the second Renaissance style by noted architect Philip T. Shutze. Inside, the details of the main bank floor are spectacular. The upper floors now house Georgia State University's School of Business Administration. NR

20. HISTORIC FIVE POINTS (1830s). Marietta and Peachtree Sts. In the earliest days of the settlement, village shops were built just north of the railroad tracks at the intersections of Marietta, Decatur, and Peachtree roads. Nicknamed "Five Points," the area has long been the symbolic heart of the city. On the southwestern corner of Marietta and Peachtree was Jacob's Drugstore where, in 1886, Coca-Cola was first served as a fountain drink.

21. UNDERGROUND ATLANTA (1870s–90s). Alabama and Old Alabama Sts. Now a popular dining and entertainment complex, the buildings that make up underground are some of the city's oldest, built during the reconstruction of the city after the Civil War. Underground began to take shape when bridges were built over the railroad tracks in the early 20th century to accommodate automobiles. The old street level became storage and was forgotten until creation of the first Underground Atlanta in the 1960s. Historic markers throughout the complex describe the significant buildings.

22. GEORGIA RAILROAD FREIGHT DEPOT (1869). Central Ave. and Martin Luther King (MLK) Jr. Dr. The oldest existing building in downtown, the depot was built to replace the one destroyed by Union troops in 1864. Now owned by the Georgia Building Authority, the building is used as a special events facility. Inside the authority offices is the "Zero Mile Post," a stone marker erected in 1837 to mark the terminal point of the planned rail line to Chattanooga. NR 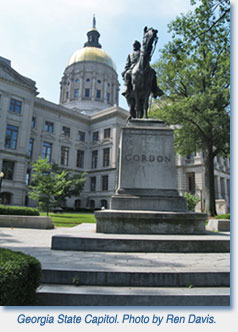 23. SHRINE OF THE IMMACULATE CONCEPTION (1873). 48 MLK Jr. Dr. During the Civil War, Father Thomas O'Reilly, pastor of this church, persuaded Union officers to spare his and other churches from destruction. This Gothic style structure replaced the original building, constructed in 1848. Fr. O'Reilly's tomb rests in the basement of the church. NR

24. FULTON COUNTY COURTHOUSE (1914). 150 Pryor St. The largest courthouse in Georgia, the Beaux-Arts style granite structure was designed by A. Ten Eyck Brown in association with Morgan and Dillon. NR

25. ATLANTA CITY HALL (1930, expanded 1992). 68 Mitchell St. Designed by Lloyd Preacher, the 14-story building is an excellent example of neo-Gothic design. The lobby's ornate details carry on the Gothic motif. During the Civil War, this was the site of the home of John Neal. The home served as Gen. W. T. Sherman‘s headquarters following the city's capture. NR

26. GEORGIA STATE CAPITOL (1889). 206 Washington St. Designed by the Chicago firm of Edbrooke and Burnham, this grand neoclassical style building is modeled after the U.S. Capitol. Interestingly, the building was completed on time and $118 under budget. The dome was first overlaid with Dahlonega, GA gold in 1958 and has been refurbished twice since. In addition to state offices and legislative chambers, the Capitol houses a small museum of Georgia's natural and human history. Prior to construction of this building, Atlanta's combined city hall and courthouse, built in 1854, stood on this site. Guided tours are available. NL

27. CENTRAL PRESBYTERIAN CHURCH (1884). 201 Washington St. This congregation's first church was erected in 1860 and, with Fr. O'Reilly's help, survived the Civil War. It was demolished in 1883 to make way for the current Romanesque style sanctuary. NR 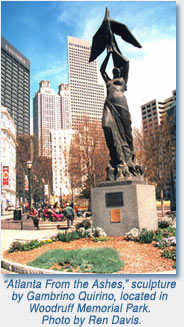 28. GEORGIA STATE UNIVERSITY (1940s–2000s). Decatur, Gilmer, and Courtland Sts. This sprawling complex of academic and former commercial buildings comprises the campus of Georgia's third largest university, with an enrollment in excess of 30,000 students.

29. GEORGIA STATE ALUMNI CENTER (1909). 30 Courtland St. Designed by the firm of Morgan and Dillon, the building served as Atlanta's Municipal Auditorium for more than 60 years. In the early years of the-20th century, Enrico Caruso and the Metropolitan Opera performed here; later the large hall held Barnum and Bailey's Circus; and the city hosted a gala ball here for the world premiere of Gone with the Wind. Georgia State purchased the building in the 1970s and gutted the interior, preserving only the facade of the original structure.

30. OLD DIXIE COCA-COLA BOTTLING COMPANY BUILDING (1890s). 125 Edgewood Ave. This modest, Queen Anne style structure with its asymmetrical design served as the first bottling plant for the fledgling Coca-Cola Company, then headquartered a block away. The building has been extensively renovated and remodeled to serve as the Georgia State University Baptist Student Center. NR

32. WOODRUFF MEMORIAL PARK (1973). Peachtree St. and Park Place. This open green space was created from land donated to the city by Coca-Cola Company chairman Robert W. Woodruff. The park offers a respite from the surrounding urban towers and frequently is the scene of scheduled political and performing arts events, as well as impromptu street artists and preachers. The Gambrino Quirino sculpture, Atlanta From the Ashes, a 1969 gift to the city by the Rich's Foundation, was relocated to the park from its original location at Spring and MLK Jr.Dr. in 1996.

This concludes the tour. It is just a short walk back to your hotel.