Georgia and the Nobel Peace Prize 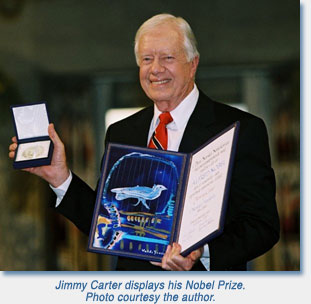 Nobel Peace Prizes won by two famous Georgians are displayed in Atlanta, both close to downtown hotels and just a mile and a half apart from each other. Although the Norwegian Nobel Committee selects only one person a year on average to receive arguably the planet's highest award, Atlanta also has links to several other Nobel laureates.

Martin Luther King Jr. announced during the ceremony for the 1964 award: "I accept the Nobel Peace Prize at a moment when 22 million Negroes of the United States of America are engaged in a creative battle to end the long night of racial injustice." His medal is displayed at the King Center's Freedom Hall (449 Auburn Ave. NE). A walking trail with historic markers links the King medal to one awarded to another Georgian.

Jimmy Carter won the 2002 prize for his work at the nonprofit Carter Center and the brokering of the Camp David Peace Accords while president. The Carter Presidential Library (441 Freedom Pkwy.) features two of the three medals each Nobel laureate receives, providing a rare opportunity to see both sides at the same time. (Carter's third medal is exhibited at his old Plains High School, which is now part of the National Park Service's Plains Historic Site.)

The other American presidents who've won the Nobel Peace Prize—Teddy Roosevelt in 1906 and Woodrow Wilson in 1919—also have Georgia ties. Roosevelt's mother, Mittie Bulloch, was raised in Roswell, Georgia, now a suburb of Atlanta. Visitors to Roswell won't see Teddy's prize, but they can view the home where his parents were married, the antebellum Greek revival mansion called Bulloch Hall (180 Bulloch Ave.).

Woodrow Wilson spent part of his boyhood in Augusta, worked for a while as an attorney in Atlanta, and married a woman (his first wife Ellen Axson Wilson) who was raised and buried in Rome, Georgia. It is sometimes suggested, only partly in jest, that "If you manage to get elected president and your mother lived in Georgia, you have a hundred percent chance of winning the Noble Peace Prize!"
Family relationships also link Atlanta to Peace Prizes won by three leaders in Africa. South African Bishop Desmond Tutu (1984) and former President Nelson Mandela (1993) have a daughter and granddaughter, respectively, residing in Atlanta. The daughter of Kenyan environmental activist Wangari Maathai (Nobel Prize in 2004) worked for several years at the Carter Center in Atlanta. In addition, agricultural scientist Norman Borlaug (Nobel Prize in 1970) is a long-time consultant (not in residence) for the center.

Thus, in the 86 years that a prize has been awarded, there is a Georgia connection on eight occasions. Without stretching the point too much, one might argue the number is nine. Anwar Sadat and Menachem Begin won their Nobel Peace Prizes for 1978 in recognition of the Camp David Peace accords, which were hosted, of course, by Jimmy Carter.

—Jay Hakes serves as the director of the Carter Presidential Library. He came to Atlanta in 2000 after seven years as administrator of the federal Energy Information Administration. He is currently writing a book on energy policy during the Nixon, Ford, and Carter presidencies and is a member of the Local Arrangements Committee.