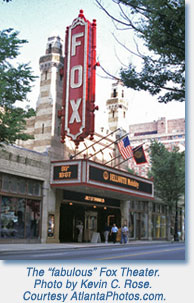 Without question, the magnificent Fox Theatre, one of the nation's great performing arts centers, is the grand dame of Atlanta's famed Peachtree Street. Born at the end of the Roaring Twenties, the "Fabulous Fox" weathered the Great Depression and offered respite for moviegoers during World War II. From the 1940s through the late 1960s, the Fox was the place in Atlanta to take in a movie followed by snacks at the nearby Varsity drive-in (another Atlanta landmark still serving their trademark "yellow dogs"—hotdogs with mustard). The theater came close to collapse in the 1970s, when declining attendance caused by explosive suburban growth left the prospect of the wrecking ball looming over threadbare and neglected Fox.

As the story is told, Atlanta's first African American mayor Maynard Jackson (elected in 1973) held the old theater's fate in his hands. His signature was needed to proceed with demolition and he wavered. He recalled his own youth during Jim Crow when he could only enter the theater through the back entrance and "Coloreds" were confined to the balcony while white patrons enjoyed the best seats. Realizing that it was racial prejudice and not the theater that was the problem, he stayed the Fox's execution, assuring that the magnificent movie palace would survive.

The Fox did not begin as a movie theater. Commissioned by a Masonic organization as a Shrine Mosque, the opulent, Moorish-inspired building was completed as the nation slipped toward the Great Depression. Realizing they could not afford to operate the facility, Temple leaders offered to lease the building to movie magnate William Fox as part of his chain of movie palaces. Fox agreed and the theater opened with great fanfare on December 25, 1929—less than two months after the stock market crash. Within three years the Fox was bankrupt and sold to a holding company for $75,000 (today the estimated worth of the Fox exceeds $300 million). The Fox was given new life in 1935 with its purchase by Paramount Pictures.

For the next three decades, the 4,678-seat auditorium, renowned for its Arabian Nights-inspired architectural embellishments (including a faux night sky with twinkling stars and drifting clouds) was a favorite destination for moviegoers and, beginning in 1948, for patrons of New York's renowned Metropolitan Opera Company who flocked to the Fox each spring for a week of live performances. However, by 1970, the Met had moved to the Civic Center, suburban theaters were drawing the crowds, and the old theater was in a state of disrepair. In 1974, Southern Bell approached the building's owners to propose purchasing the site as the location of its planned corporate headquarters.

The Fox and the Rise of Atlanta's Modern Preservation Movement

The possible demolition of the Fox sent shockwaves through Atlanta's nascent historic preservation community and galvanized it into action. Atlanta Landmarks, Inc. was formed and launched a "save the Fox" campaign to draw public attention to the value of this historic treasure. That same year the theater was placed on the National Register of Historic Places, a fortuitous event that forestalled demolition long enough for Atlanta Landmarks to put together the financial package they needed to buy the theater. Along the way, a constituency for preservation was created in the city. Within three years, the loan was paid off through donations and benefit performances by musicians like Linda Ronstadt. The Fox was back in business. In 1979 it hosted a record-breaking run of the Broadway musical A Chorus Line. Later that year, the Fox welcomed large crowds to a series of 50th anniversary programs, including performances by Beverly Sills, Waylon Jennings, and the Atlanta Ballet.

Over the next several years, the Fox hosted Mick Jagger and the Rolling Stones, Yul Brynner in a reprise of The King and I, and other successful Broadway shows. By 1986, the Fox was ranked alongside New York City's Radio City Music Hall as one of the finest large-venue performing arts centers in the nation. The next year, a second successful fund raising campaign yielded $4 million to "fix the Fox"—providing desperately needed building repairs and refurbishing of the interior. In 1989, the Fox was the logical choice to host a 50th anniversary re-release of Gone with the Wind (the Loew's Grand Theater, site of the 1939 world premiere, was destroyed in a 1977 fire; however, the GWTW cast, including Clark Gable, Vivien Leigh, and Olivia de Havilland stayed at the elegant and newly restored Georgian Terrace Hotel across Peachtree Street from the Fox).

Today, as the Fox enters its ninth decade, it continues to entertain Atlantans with a delightful mix of films, concerts, and stage performances, including the popular Summer Family Music Festival and annual Theater of the Stars live productions. A who's-who of headline performers return again and again to sold-out shows at the venerable, but still "fabulous," Fox. For patrons of the arts and preservationists, the Fox Theatre is one of Atlanta's success stories.

Come visit the theater, located just blocks from the AHA's meeting hotels. Settle in for a movie or a show beneath the twinkling stars; or sign up for a behind-the-scenes tour of this remarkable facility, offered several times weekly by the Atlanta Preservation Center.

—Ren Davis is co-chair of the Local Arrangements Committee and, with Helen Davis, is author of two highly regarded guide books that feature Atlanta's and Georgia's natural history, culture, and built environs.