Visitors to the Atlanta annual meeting will be able to observe some of the masterworks of Atlanta architecture. Atlanta is a new city center surrounded by a ring of historic neighborhoods. The following list of architecture worth seeing includes examples from both areas and is a very limited sampling of Atlanta's architecture. For a more complete listing see the AIA Guide to the Architecture of Atlanta (University of Georgia Press, 1993). 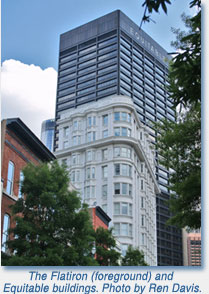 We start our tour at three of the meeting hotels. The Hyatt Regency, Marriott Marquis, and Westin Peachtree Plaza were all designed by Atlanta architect John Portman. The Hyatt, built in 1967, was the first to include Portman's now-famous innovative hotel design featuring a large atrium with glass elevators. The Westin, built in 1976 and remodeled in 1986, is one of the tallest hotels in the nation (70 stories). Its rotating restaurant and lounge provide a spectacular view of the city. The Marriott Marquis, built in 1985, ballooned the atrium lobby to 48 stories in 515 feet. Portman's hotel formula has been incredibly successful around the world (see "The Kubla Khan of Hotels," New York Times, June 25, 2006).

The next downtown building to visit is the Equitable Building (100 Peachtree St. NW). The 35-story black building, designed by Skidmore, Owings & Merrill, is a textbook example of an international style skyscraper. It was built in 1968, three years after the Chicago Civic Center. Enter on the Peachtree side and go up the escalator to the second floor for a small exhibit on the building and the international style.

Two buildings of very different style are located nearby. Go out the rear of the Equitable Building to Forsyth Street and look right for the Atlanta-Fulton County Public Library. The building is a large concrete structure in the brutalist style designed by Marcel Breuer. The building was commissioned in 1969 but took 10 years to complete. It is reminiscent of Breuer's New York Whitney Museum.
Down Forsyth Street is the last of the downtown buildings on the tour—the Healey Building (57 Forsyth St.). Built in 1913, the terracotta-clad Gothic revival building is an elegant early skyscraper. Go inside for a wonderful atrium and consider having lunch in one of the building's restaurants or visiting one of the shops out the rear of the building on Broad Street. Across from the Healey Building on Forsyth is the United States Eleventh District Court of Appeals building (1911, James Knox Taylor).

The remaining buildings are just north of the hotels on or crossing Peachtree Street. Two of the best known are north on Peachtree Street. The "Fabulous" Fox Theater, a 15-minute walk from the meeting hotels, is the last major movie palace in Atlanta. The Fox, designed by Marye, Alger and Vinour, opened in 1929. The grand building has a troubled past. It was originally designed as a Shriners temple and taken over by William Fox after the group was unable to complete the building. Opening just before the Depression, it was never as successful financially as it was artistically. Threatened with demolition, it became a pivotal Atlanta preservation battle. It is now a centerpiece of Atlanta's cultural life and one of the most successful theaters in the nation. The interior is particularly noteworthy and well worth a tour or a visit during a production (660 Peachtree St. NE, www.foxtheatre.org).

Farther up Peachtree stands the High Museum, as close as one gets to an icon of Atlanta architecture. The original 1983 building, a white porcelain steel building by Richard Meier, was successful in giving the museum a strong statement about its aspirations. The building was so successful as a statement of modern architecture that it received an American Institute of Architecture award as one of the 10 best buildings of the 1980s and was one of 12 structures selected by the U.S. Postal Service for its "Masterworks of Modern American Architecture" stamps issued in 2004. An addition to the building by Italian architect Renzo Piano, doubling the size of the High, opened in 2005. The resulting space is well worth a visit for either the collections or the building itself (1208 Peachtree St. NE, www.high.org).

Go back to the Fox Theater and turn east onto Ponce de Leon to reach the Druid Hills neighborhood. Ponce de Leon Avenue is the central focus of Atlanta's first "comprehensive suburban development." Frederick Law Olmsted designed the landscaping along Ponce de Leon, which is lined with large houses and vest-pocket parks. The street, used in Driving Miss Daisy, is one of several early suburban neighborhoods that are worth a visit (www.druidhills.org).

Finally, when visiting the Atlanta History Center be sure to visit both the Swan House and the Tullie Smith House. The Swan House is one of Buckhead's best known buildings. It is a grand 1920s house by one of Atlanta's best known architects. Philip Shutze designed the house for the Inmans as an Italian villa with elaborate gardens. The Atlanta History Center received the house from Mrs. Inman, and for that reason it has a wonderful collection of original furnishings. The Tullie Smith House is a contrast in almost every way. It is a simple plantation plain style vernacular building, which was moved to the history center grounds during construction of Atlanta's perimeter interstate highway. The two buildings provide a strong statement of the variety of Atlanta's residential architecture (www.atlantahistorycenter.com).