Now that you have climbed the Space Needle and rubbed elbows with the hordes at Pike Place Market, here are some sites not found in standard tour guides that locals recommend.

The Panama Hotel Tea House at Sixth and Main in the old Shiatoru Nihonmachi (Seattle Japantown) serves teas, paninis, and pastries. Spend some time admiring the historic photos from the old neighborhood. Most intriguing, though, is the window in the floor at the back of the shop that looks into the basement, which is filled with luggage left behind by Japanese families on their way to internment camps. It's all still there where it was abandoned in 1942, a powerful sight.

A number of quirky attractions are centered in Pioneer Square. Visit the Emerald City's seedy underside on Bill Spiedel's Underground Tour (608 1st Ave.) of the streets and first-floor shops of Seattle's old downtown, now located below ground. At Smith Tower (506 2nd Ave.), built in 1914 and once the tallest building west of the Mississippi River, visitors can ascend 35 floors in the original manual elevators, complete with uniformed operators, for breathtaking views of the city. The Seattle Metropolitan Police Museum (317 3rd Ave. S.) features the history of local law enforcement from the 1880s to the present, including displays of mug shots, a hangman's noose, a copper bootlegging still, old police uniforms, and a tommy-gun. Visitors can also tour an authentic Russian "Cobra" Submarine (101 Alaskan Way S. at Pier 48), which private investors purchased from the Russian Navy to operate as a tourist attraction and monument to the Cold War. The Klondike Gold Rush National Historical Park (117 S. Main St.) is also located in this vibrant district. Time to spare? Stop by the Half-Price Ticket Booth in Pioneer Square and catch a show at one of Seattle's many theaters or head over to Left Bank Books (92 Pike St.) to investigate the history of Communism and left-wing movements. 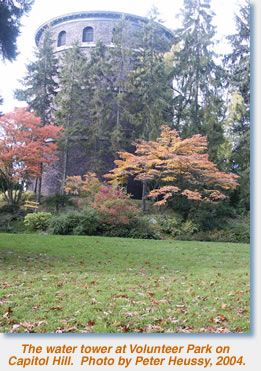 Seattle's many parks are an inexpensive source of entertainment. Myrtle Edwards Park has a nice waterfront view and has public art to explore (3130 Alaskan Way W.), while Victor Steinbrueck Park offers scenic views of the Olympics and Elliot Bay (2000 Western Ave.). The Butterfly House at the Science Center at Seattle Center is the warmest place in town; the temperature and humidity are kept in the high 80s and the lights make visitors feel like they are in the tropics as they stroll among the free-flying butterflies. On Capitol Hill, the Volunteer Park Conservatory (1247 15th Ave. E.), built in 1912, offers lovely flowers and another year-round haven of warmth. Nearby, visit the Seattle Asian Art Museum or head to Lakeview Cemetery (1554 15th Ave. E.), where Bruce Lee and his son Brandon Lee are interred near the top of the knoll. Seattle pioneers Asa Mercer, "Doc" Maynard, the Denny family (credited with founding Seattle), Irving Ballard (founder of Ballard), and Princess Angeline (daughter of Chief Sealth) are buried there as well. Across the street, the Louisa Boren Park Lookout presents stunning views of Lake Union and Lake Washington. For film buffs, 911 Media Arts Center (117 Yale Ave. N.) regularly screens independently produced cinema as well as boasting its own production studios.

Need to warm up inside and out? Try the Library Bistro (92 Madison St.), where books line the walls and patrons choose from over 50 kinds of scotch. If you're in the mood for martinis, Marcus' Martini Heaven (88 Yesler Way) boasts of 75 varieties. Locals claim the best martini in town can be found at Oliver's (405 Olive Way).

North of downtown, the neighborhood of Fremont bills itself as the "Center of the Universe" (www.fremontseattle.com). The artistic community abounds with quirky public art. Start at the 53-foot tall Rocket at the Center of the Universe (N. 35th St. and Evanston Ave.). Around the corner, Waiting for the Interurban (N. 34th St. at the Fremont Bridge) depicts a group of people waiting for the light rail line. Locals often adorn the statues in costume. The celebrated Fremont Troll haunts the area under the Aurora Bridge (N. 36th St. and Aurora Ave. N.), as does a giant statue of Lenin that once stood in Slovakia and now stands at the triangular corner of N. 36th Street and Fremont Place. The sign claims this is the only statue of Lenin surrounded by guns and flames rather than with a book or a hat. Just down the street from Lenin, stop by the Longshoreman's Daughter (3508 Fremont Pl. N.) for breakfast. The area around Fremont Ave. and Fremont Place invites you to explore its eclectic stores, restaurants, and coffee shops.

Ballard, Seattle's Norwegian neighborhood, is locates west of Fremont (www.inballard.com). One of the best deals in town is the early bird special, served weekends from 7:30 to 8:30 a.m. at Chinooks, at Fisherman's Terminal (1900 W. Nickerson St.). You get great warm scones with citrus butter, good Seattle coffee, eggs, bacon, and potatoes for $6.95—and you dine looking out at the working waterfront. Then you can work off the calories by either walking through Fisherman's Terminal to the locks or through Discovery Park. The Hiram H. Chittenden Locks (3015 NW 54th St.) were built to keep the freshwater lakes uncontaminated by the saltwater of the Puget Sound. Discovery Park (3801 E. Government Way), over 500 acres of extensive trails, winds through old-growth forests or down to the beaches of the Puget Sound. Stop by Madame K's (5327 Ballard Ave. NW) for incredible pizza served in a building rumored to be a former brothel.

The University of Washington Seattle (UW) campus contains interesting architecture and entertainment venues. The Reading Room at Suzallo Library is a brilliant example of early 20th-century Gothic architecture. Check out the Medicinal Herb Garden, the largest of its kind in the country, or the memorial to General Lafayette, the French nobleman who fought with George Washington during the American Revolutionary War. UW's self-guided campus tour is both informative and interesting
(www.washington.edu/univrel/visitors/campuswalk.pdf). 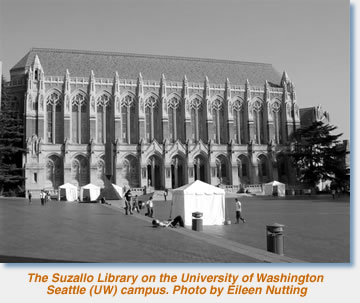 Jimi Hendrix devotees should make a pilgrimage to his grave in Renton (350 Monroe Ave. NE). Another great adventure is to drive across the West Seattle Bridge and visit Alki Beach. Wonder at the gorgeous views of the downtown skyline while eating at the Beach House Italian Café (2620 Alki Ave. SW) or at Salty's (1936 Harbor Ave. SW). While wandering the beach, stop in at the Alki Café Beach Bistro (2726 Alki Ave. SW) or the Alki Bakery (2738 Alki Ave. SW). Circa (2605 California Ave. SW) is another great West Seattle eatery. The Alki Point Lighthouse is closed for tours in the winter but still offers incredible views (3201 Alki Ave. SW).