Cynthia E. Orozco is professor of history and humanities at Eastern New Mexico University, Ruidoso. She lives in Ruidoso, New Mexico, and has been a member since 2000. 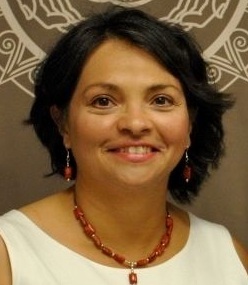 Describe your career path. What led you to where you are today? I started archival research as a sophomore in 1978 and studied the origins of LULAC, the League of United Latin American Citizens, this nation’s most important Latino civil rights organization. I used the private archives of Alonso Perales and Adela Sloss Vento and wrote a senior honors thesis on conflict between Mexican Americans and Mexicans in civil rights organizing in the 1920s in Texas. I began attending national academic conferences as a junior. I had mentorship as an undergraduate. My mother, Aurora E. Orozco, was an activist and had a high school degree, the equivalent of a college education for her time in 1938. As an immigrant child she was a Dreamer. She became a writer when all six kids went to college.

As a graduate student, I helped to develop the field of Chicana Studies and Chicana history. I headed the Women’s Unit of the Chicano Studies Research Center at UCLA and am a founder of the Chicana Caucus of the National Association for Chicano Studies.

Also as a graduate student I worked as a research associate and wrote 80 articles for the New Handbook of Texas for the Texas State Historical Association (TSHA) on Mexican American history. (The TSHA made me a “fellow” in 2012.) By the way, TSHA is now producing a women’s encyclopedia and I am on that board. I then worked at the museum and the Institute of Texan Cultures, and continue to do museum consulting. The National Association of Latino Arts and Culture Arts commissioned me to study Latino museums of the Southwest. I taught at UT San Antonio and had a Ford postdoctorate at UT Austin and then one at the University of New Mexico. I am the only history professor at my college.

I began working as a public historian/public intellectual 40 years ago and have written over 80 articles for newspapers and newsletters in New Mexico, California, and Texas. I work to make a difference wherever I live. For instance, I spearheaded the effort to create tenure at my college. I also served as a curator of education at the Hubbard Museum of the American West and wrote newspaper articles for them. I also organized the sesquicentennial conference on Fort Stanton. In 2012, New Mexico LULAC recognized me as Educator of the Year. I have also developed some key chronologies such as the one LULAC has on its website. I have also conducted oral histories and just donated those to the University of Texas Latino Voices Project on politics and civic engagement.

What do you like the most about where you live and work? Since I am in Lincoln County, I teach classes on New Mexico, the Lincoln County War, and Fort Stanton. I also train docents for the state historic sites of Lincoln and Fort Stanton. I have taught senior citizens local history for a decade. I also get to teach high school students in the dual credit program—they are fun and enthusiastic. I get to teach Western civilization and Mexican history. I also like that I can go home for lunch and even sneak in a 10-minute nap. I am also two and half hours from Mexico.

What projects are you currently working on? I have been commissioned by Arte Publico Press, the largest Latino literature press, to write the biography of Alonso Perales, the major founder of LULAC and a US diplomat. He is considered one of the most important Mexican Americans in the 20th century. I just completed a book manuscript of Adela Sloss Vento, a civil rights leader, public intellectual, and feminist from Texas. When she was 75, she self-published a book about Perales but also spent decades writing for South Texas newspapers in Spanish and English on racial segregation and the exploitation of Mexican workers. A future project is to write the biography of Leo Martinez, the only Chicano elected to the Santa Barbara city council in the 20th century.

Have your interests evolved since graduation? If so, how? I could have cared less about Billy the Kid. But now he and the Lincoln County War are one of my research projects. The academic study of the Lincoln County War is underdeveloped. Billy the Kid was a racist but much less so than the white Texans here in the 1870s. Foremost, he was a cowboy.

Is there an article, book, movie, blog etc. that you could recommend to fellow AHA members?I recommend my book, No Mexicans, Women or Dogs Allowed, the Rise of the Mexican American Civil Rights Movement (2009) because it helps us understand anti-Mexican sentiment today. Moreover, it is on the origins of LULAC, which dates back to 1929. LULAC needs to be in every US history textbook.

What do you value most about the history discipline? I like the topical variety of history and its ties to art.

Why is membership in the AHA important to you? Membership helps me stay more broadly informed of national and international developments.