The collapse of the militarized border fortifications that constituted the Berlin Wall rapidly attained immense cultural significance, in Germany and abroad. For those who endured this gruesome colossus for nearly three decades, interpreting the wall’s legacy has proven daunting. The intensity of foreigners’ interest in remnants of the wall was initially puzzling: while many outside the country had come to view the wall as a long string of graffiti-covered barriers, Germans, above all those living in the East and in divided Berlin, experienced the armed installation as monstrously elaborate and deadly. As the 1990s dawned, Germans in East and West were generally unmoved by arguments to conserve a section of the lethal border in situ.

Remembrance of the wall’s destruction—the most dramatic moments occurred on the evening of November 9, 1989—has in recent years emerged as a national priority, with that date assuming prominence alongside other November 9ths, most notably the Reich (including annexed Austria) pogrom of 1938. Five years ago, Lech Wałęsa helped commemorate the fall of the Berlin Wall by toppling a row of supersized Styrofoam dominos. For this November 9, Berlin’s government will release 8,000 helium-filled white balloons strung along eight miles of the former inner-city border. Whether this abstruse installation proves more illuminating than the reenactment of the domino theory initiated by the Polish Solidarity leader remains to be seen.

To understand wall commemoration in today’s Germany, historians should be aware of three developments: After the wall fell, representatives of the federal government reached a precedent-setting compromise with the founders of memorials established at Nazi sites of persecution. Also important were two brief periods of private-sector activism, one immediately after the wall’s rise in 1961, and another after it fell in 1989. Finally, wall memorials have had to contend with Germany’s abiding interest in highlighting Prussia’s cultural achievements before the First World War, a development older than the wall but accelerated by its collapse.

An important moment for remembrance of Nazi persecution and subsequently wall remembrance emerged in 1993, when a conservative-led federal government agreed for the first time to direct funds to local and regional commemoration sites. In West Germany, dozens of lieux de mémoire had been established by delicate coalitions of activists and survivors’ groups during that country’s grassroots history boom of the 1970s and 1980s (two older memorials, at Dachau and Bergen-Belsen, were founded during the 1960s).

In eastern Germany and once-divided Berlin, officials were subsequently drawn into debates on how to exhibit overlapping narratives of Nazi and Communist repression. In 1994, the federal parliament launched two so-called Enquete Commissions to investigate East Germany’s communist dictatorship, culminating in the establishment of a new remembrance authority, the Bundesstiftung Aufarbeitung. Upon completion of several Holocaust memorials in the German capital (the most controversial remains New York architect Peter Eisenman’s near the Brandenburg Gate), a Berlin Wall Foundation was set up in 2008 to direct national funds to two existing sites, an outdoor memorial in the city’s north, near a long-abandoned suburban rail station (the Nordbahnhof), and a refugee-processing center on the city’s southern edge.

Understanding the government’s involvement in wall remembrance efforts requires a longer look back, to the years when the Cold War in Europe threatened to become hot. Shortly after the wall’s first anniversary in 1962, the Checkpoint Charlie Museum opened to display the cruel reality of Communist oppression, lest Germans residing in the West forget the subjugation of their countrymen. The museum initiative was spearheaded by Rainer Hildebrandt, and is now run by his Kiev-born wife, Alexandra. Just as the Soviet blockade of West Berlin and the resultant Anglo-American airlift were ushering in the now-legendary East-West face-off, Hildebrandt and others were forming what became the rollback brigade known as the Kampgruppe gegen Unmenschlichkeit (Fighting Group Against Inhumanity). Negotiations with American officials led West Germany’s government to shut down this CIA-directed resistance organization during the late 1950s, leaving Hildebrandt and other fervent anticommunists without a cause—until the wall rose.

Politically charged and sensationalist, Hildebrandt’s museum has long been popular, not least because of its location near Checkpoint Charlie, the best-known crossing point between East and West Berlin. The museum consistently draws both crowds and criticism, most recently when it invited Vladimir Putin opponent Mikhail Khodorkovsky to hold a public press conference there upon his release from prison.

In the 2000s, the Checkpoint Charlie Museum prompted the city government—which for nearly 10 years had included former East German communists, the Hildebrandts’ political archrivals—to advance an official narrative of the global ideological and military struggle known as the Cold War. Utterly dependent on federal largesse, Berlin initially responded to the strident message of Hildebrandt’s museum in the spirit of the 1993 federal agreement with the activist-founders of sites dedicated to remembrance of Nazi persecution: instead of championing a large-scale new public museum in the city center, Berlin’s government initially sought to raise the prominence of existing, decentralized, ostensibly “grassroots” memorials—those deemed the most suitable places to remember the fate of victims.

One of these, the Berlin Wall Memorial site near the Nordbahnhof station, is an open-air expanse that seeks to introduce visitors to the extant physical remains of the mortal weapon known as die Mauer (the wall). A major incongruity in this regard is the inclusion of a national monument to the wall’s victims (136 at last count) and Germany’s postwar division. Dedicated in 1998, this memorial’s two steel walls mimic the original border fortifications but are so massive they distract from the actual remains of the formidable structure that was, at this site, spared complete destruction. 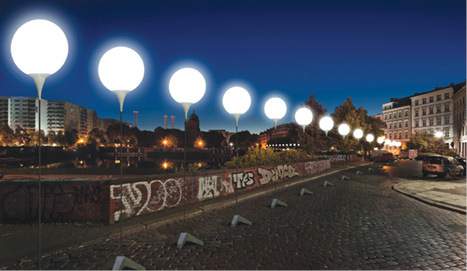 This November 9, Chancellor Angela Merkel will open an indoor exhibition at the Nordbahnhof complex to compete with Hildebrandt’s museum and other private projects. Notwithstanding significant investments at the Nordbahnhof, the city has by no means abandoned Checkpoint Charlie; efforts remain underway to erect a permanent Cold War museum there. Two years ago, the city opened a temporary exhibition next to Hildebrandt’s museum, inexplicably named Black Box, as well as a display of everyday life in the two halves of the city during the 1980s. The latter is installed in a 50-foot-high steel rotunda in the shape of a giant cylinder.

While the former concentration camps and other sites of Nazi repression languished in obscurity during West Germany’s economic boom in the 1950s and 1960s, and while federally funded commemoration of Nazi persecution from 1993 onward brought the national government into debates over the meaning of Germany’s 20th-century dictatorships for the country’s future, prodigious sums were flowing to yet another federally funded foundation, a less obvious but no less important product of the Cold War—the Prussian Cultural Heritage Foundation. Like its much smaller, newer counterparts dedicated to the critical assessment of the East German dictatorship and now wall remembrance, its 2,000 employees belong to a quasi-governmental organization, albeit one with highly influential private-sector allies.

The foundation started work in September 1961, weeks after the wall rose. The organization subsequently funded major new art museum complexes in the city’s western half, at the so-called Kulturforum near then-desolate Potsdamer Platz and in the leafy university suburb of Dahlem, to herald encircled West Berlin’s cosmopolitanism. Since the wall’s collapse, stunning, mostly 19th-century art museums have been painstakingly restored on Museum Island, an imposing ensemble named a World Heritage Site in 1999.

Edifying in its own right, Museum Island is only one component of the Prussian Cultural Heritage Foundation’s postunification plans for Germany’s capital. In 1992, a noble-born Hamburg merchant of Pomeranian descent (until 1918 Pomerania was in Prussia; today it is in Poland) laid plans to resurrect the Berlin Palace. His Friends of the Berlin Palace insisted the federal government raze East Germany’s asbestos-laden parliament building. In its place, with extensive support from both the federal parliament and the president, the foundation and its friends seek to reconstruct the Hohenzollern city palace in a style one might describe as neo-neo-Baroque, and fill it with non-European collections of colonial provenance. Until his escape to the Netherlands upon Germany’s defeat in 1918, the last kaiser resided there; Wilhelm II declared Germany’s entry into the First World War from the castle’s balcony. Four years later, on yet another November 9, Marxist Karl Liebknecht proclaimed from the kaiser’s balcony a “free socialist republic.” Damaged during the Second World War, the structure was demolished by a rather different group of communists in 1950.

This cultural undertaking—with a current price tag of $750 million, Germany’s most expensive—will tower over other remembrance initiatives for years to come. The Berlin Wall museum at the Nordbahnhof, for its part, is ill suited to compete with the castle’s stellar location on the city’s main tourist thoroughfare, the Unter den Linden.

For all that’s changed since 1989, it remains difficult for many to embrace the narrative of the wall’s collapse as wholeheartedly as the reconstruction of a royal castle. True, the 25th anniversary of Germany’s peaceful revolution will receive a dramatic ceremony, but unlike five years ago, a castle’s foundation walls are already casting shadows over the most famous Mauer of all. To compete with this 21st-century Prussian Luftschloss, the Berlin Wall Memorial had little choice but to seek an ersatz form of nobility—an application to the UNESCO World Heritage authority is in the works.

Keith R. Allen, a research scholar at the University of Giessen, is investigating refugees and western intelligence in Germany with the support of the German Research Foundation (Deutsche Forschungsgemeinschaft). In 2013, Allen published a study of refugee interrogation entitled Befragung Überprüfung Kontrolle: Die Aufnahme von DDR-Flüchtlingen in West-Berlin bis 1961.