Put Your Feet on the Ground of History

Sometimes the best teaching moments are unexpected, spontaneous, and created by the students themselves. History majors at Sacred Heart University personified the quest for active and engaged learning with their eagerness to “put their feet on the ground of history.” That phrase, shared with us by Harpers Ferry National Historical Park volunteer Doug Perks to emphasize the benefits of visiting historical sites, became the charge for our group as we searched for John Brown on the second annual history department trip in April 2014.

My first semester at Sacred Heart University in Connecticut in 2012 coincided with the announcement of a conference in March 2013 cosponsored by Gettysburg College and the Gettysburg National Military Park called “The Future of Civil War History: Looking Beyond the 150th.” I was eager to attend but thought it would also be a great experience for students. The dean funded a successful trip for myself and six history majors, and soon students began asking, “Where are we going next year?”

Coincidentally, planning for the 2014 trip complemented a recent departmental push to advertise the history program and attract more students. Our number of history majors has noticeably declined in recent years, and we have been vigorously devising new strategies to market the major. One aspect of this endeavor has been to address the age-old question “What will you do with a history degree?” With this in mind, I decided we would attend the annual meeting of the Society for the History of the Federal Government. A conference about the work of historians in the federal government sounded like a perfect opportunity to expose our students to the variety of careers available to them.

Additionally, my recent US Civil War class had read Tony Horwitz’s Midnight Rising: John Brown and the Raid That Sparked the Civil War, and the students had spent countless hours debating and writing about whether Brown was a martyr or a terrorist and whether he had failed or succeeded. Shepherd University, the site of the conference, was only minutes away from Harpers Ferry National Historical Park, where Brown’s 1859 raid took place. My suggestion to a few students in that class that we head to the scene was met with enthusiasm. Professor Jennifer McLaughlin joined me on the trip, along with 10 history majors.

At the last minute, the group decided to add Antietam National Battlefield to the agenda, and we arrived there on a bleak, rainy afternoon only 45 minutes before the visitor center closed. I purchased two car tour CDs at the gift shop and attempted to convince my travel-weary companions to remain excited about spending another 80 minutes in the vans. We were all skeptical.

Soon, as the rain stopped and we got out of the vans, we became believers. The tour was more than we expected. The students walked solemnly through Bloody Lane, ran the steps at the observation tower, and took pictures of monuments. At Burnside’s Bridge, one student and I took the path to the Georgia soldiers’ lookout and gained a visual understanding of their position, while the rest of the group tried to find us on the hill, realizing, much to their horror, that we could see them far more easily than they could see us. This unplanned moment morphed into a significant teaching opportunity about position and military advantage. The students were beginning to recognize that seeing historical sites could enrich our classroom discussions. Our tour ended at the Antietam National Cemetery, a full two and a half hours after it started. Darkness and rain drove us into a local tavern for dinner, where we talked about how much the afternoon had surprised us. 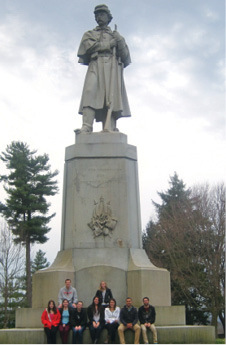 On Friday morning, we went for a walking tour with Doug Perks, a fantastic volunteer at Harpers Ferry. We told him we were mainly interested in John Brown, but he managed to capture our imaginations with the history of Harpers Ferry from its founding in the late 18th century, its antebellum economic growth, John Brown’s raid, its importance during the Civil War, and its significance to the civil rights movement in the 20th century. He was a wealth of knowledge and kept the students engaged despite the cold, windy conditions. After lunch, we continued to explore by visiting additional John Brown and Civil War sites in the area. At the students’ suggestion, we saw the Lockwood House and Jefferson Rock (gorgeous views!), found Kennedy Farm, which served as Brown’s raid headquarters, among winding Maryland country roads, “invaded” Harpers Ferry again while coming back from the farm, took photos outside the courthouse where Brown was tried, and listened to dramatic stories from the owner of the house that now sits by John Brown’s hanging site. The day broadened our understanding of these major historical events and filled us with even more appreciation for tracing history in person.

The students approached Saturday’s conference with anticipation and nervous energy. Most of them had never been to a professional history conference and did not know what was in store. Some of them expected larger crowds, while others were surprised that there were so many people there. The students got right to work picking panels to attend and later compared notes on their favorite papers. Many admitted that some of the presentations were difficult to understand and that keeping up with the discussion seemed impossible at times. They felt young and somewhat conspicuous but welcomed by the historians at the conference.

We also encouraged the students to network and introduce themselves to panelists. Several students approached presenters and asked follow-up questions about a paper or clarifying questions about career paths. These conversations increased the students’ confidence and illustrated how historians share research, posit new hypotheses, and deal with questions and obstacles. Students realized that historians often do more than teach; they were astounded by how many historians end up on career paths they had never envisioned. While this new knowledge helped students understand that they have many opportunities available to them, it was both liberating and frightening—they live in a world where they are supposed to have one answer for the question “What do you want to be when you grow up?”

On Sunday, we returned to Connecticut. Tired but inspired, the students had made new friends, strengthened their identities as budding historians, and become more confident they’d made the right decision when they chose the history major.

Jennifer McLaughlin and I guided the trip, but we gave the students significant input and freedom to determine what we’d see and, at the conference, which panels to attend. This helped each student feel that the trip was personalized. Our experiences at various stops demonstrated how historians make choices about how to gather information. Students grasped that museums, historical sites, and guidebooks are historical interpretations and that public historians negotiate sources and memory to present a narrative. The conference then helped them see the many facets of history come together. They heard how historians analyze images, texts, and discourse in ways that they as students do not always experience in a classroom. Overall, the students perceived the nuances of history as a profession, rather than history just as a course.

One of the best decisions I made about these trips was to ask the students to write daily reflection e-mails to me about their experiences. The students did this faithfully, and their writings were humorous and insightful. I subsequently used them to create a presentation that we gave at the annual history department dinner. The students also handwrote thank-you notes to the dean.

Through their reflections, it became clear that while we had gone looking for John Brown, we had found much more. We had put our feet on the ground of history, and by doing so had embraced how seeing can enhance classroom learning. Our experiences complemented the intensive day at the conference, which revealed the many hats worn by professional historians and expanded the career horizons of these young scholars. The students did not want the weekend to end, and immediately began asking where we will go next year.

Luckily, I already have a destination in mind.

Julie A. Mujic is assistant professor of history at Sacred Heart University in Fairfield, Connecticut. She teaches 19th-century US history and recently published a chapter in Ginette Aley and Joseph L. Anderson, eds., Union Heartland: The Midwestern Home Front during the Civil War. She can be reached at mujicj@sacredheart.edu.