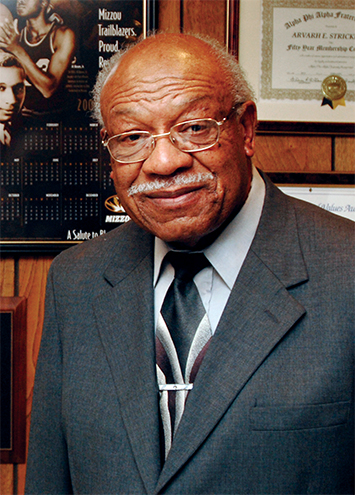 Historian of African Americans in the 20th Century

Arvarh E. Strickland, professor emeritus of history at the University of Missouri, died on April 30, 2013 at the age of 82. When he arrived on campus during the summer of 1969, he was the first African American faculty member in the university’s history. At that time, no course on African American history had ever been taught at MU. When Arvarh died 44 years later, meetings were conducted in the Strickland Room in Memorial Union, classes were taught in the Strickland Building, the distinguished scholar Wilma King held the Strickland Professorship, and a black studies program regularly offered a broad array of courses. Arvarh Strickland was born July 6, 1930 in Hattiesburg, Mississippi. These were hard times in a Jim Crow city. Blacks had been shoehorned into a few square blocks, and the young Arvarh rarely went beyond them. Yet within these confines was a rich community life that sustained those living in the district. There were schools and churches, shops and filling stations, cafes and a beer garden, all owned and operated by African Americans, and all surrounded by homes owned and occupied by blacks. St. Paul’s Methodist Episcopal Church was especially important to Arvarh. Equally important were the black schools of Hattiesburg. The schools, he recalled, lacked practically everything, but in them he “learned to value excellence [and] developed pride, . . . acquired ambition, and above all learned to dream and to appreciate dreams others had for us.”

At Tougaloo College, where he went become a teacher himself, Arvarh discovered his life’s work. A western civ class entranced him, while causing him to ask why people of color were mostly absent from the narrative. He decided to remedy this, first by teaching, then by writing, history with African Americans in their proper, prominent role. To achieve this, he pursued a doctorate at the University of Illinois. Making ends meet for his wife Willie Pearl and their children required some years spent teaching social science in the segregated schools of Hattiesburg and Madison County. He swiftly rose to principal and supervisor of black schools in Madison County.

As Arvarh was completing his dissertation on the Chicago Urban League (Illinois, 1962), the Stricklands joined the massive African American migration to the Second City. In 1962, he was appointed assistant professor at Chicago Teachers College. By 1968, he had risen to the rank of full professor on the strength of dedicated teaching and the publication of his History of the Chicago Urban League (Univ. of Illinois Press, 1966) to enthusiastic reviews that anticipated the book’s ultimate reputation as a classic of Black Freedom Movement institutional history. These successes whetted his appetite for an appointment at a major state university. There, the teaching load would be lightened, the opportunities to teach graduate students and widen further knowledge of black history would exist, and the financial and collegial encouragement of research would expand.

During the 1960s, the Department of History at Missouri began looking for someone who could teach black history to undergraduates and graduates. Faculty at Illinois persuaded Chairman Charles Nauert to invite Arvarh to apply for an opening. Impressed by his performance at a discussion of his research and teaching interests, the faculty told him they wanted to offer him a job. But the university’s administration refused to budge on the salary. In 1968 purse strings loosened. The Department of History was given permission to fill three slots at the full professor level. The department decided that one of these had to be in black history, and the faculty resolved “that an attempt should be made to attract a Negro for the Negro historian’s position.” Soon after approving the resolution, they voted unanimously “to offer a position to Professor Strickland.” He accepted a position as full professor and began teaching in the fall of 1969.

The faculty swiftly appreciated Arvah’s common sense, his civility, his manifest skills as a teacher and researcher, and his wit. The town, however, was less prepared. The city’s long history of entrenched school segregation and the recent destruction of the city’s thriving black businesses and neighborhoods had left the community fractured and angry. Arvarh’s response was to help rebuild a community, and make it inclusive for all residents of Columbia, Missouri. He and his family integrated the First United Methodist Church. He became a prominent member of the Kiwanis Club. He helped create the Guardians, an organization of middle class black men committed to providing social opportunities for all African Americans by assisting newcomers and raising money to provide financial and educational assistance for young blacks. Arvarh also served on countless city committees. He encouraged political organizing in black neighborhoods in support of black candidates. He advised the school board. He helped supervise the Columbia Housing Authority. Perhaps most significant of all, he served on Columbia’s Planning and Zoning Commission, the first line of defense against more urban renewal of working class neighborhoods. This commitment to community and service also dominated Arvarh’s teaching and writing. That the Southern Historical Association recognized this by giving him the John W. Blassingame Award for mentoring students was merely icing on the cake. And he turned away from a distinguished career as a historian of the Black Freedom Movement to write textbooks for secondary schools, and to edit and explicate the diaries that Lorenzo J. Greene kept during the years he worked with Carter G. Woodson, in Selling Black History for Carter G. Woodson: A Diary, 1930–­1933 (Univ. of Missouri, 1996). He also collaborated with his colleague Robert E. Weems, Jr., on the indispensable The African American Experience: An Historiographical and Bibliographic Guide (Greenwood Press, 2001).

Arvarh Strickland met the challenge he set for himself at Tougaloo College. He helped insure that people of color would play a significant role in the telling of the narrative of US history. He also struggled mightily to rebuild Columbia’s community and duplicate in his adopted city what sustained and inspired him in his home town.

Arvarh came a long way during his life. That’s great. He brought his students, colleagues, university, and Columbia with him. That’s greatness.

An earlier version of this obituary appeared in the 2013 Missouri Department of History newsletter.