“To Save Her Sister’s Soul”: Uncovering a Nurse’s Trauma in WWI Britain

One of the most challenging aspects of studying the case notes of women treated for war trauma is that I encounter them at some of the worst moments of their lives. There are often few ways to find more information about them, or to learn what their lives were like after they were released. In many cases, the only story that I can craft about the women I study is about their incarceration in asylums and hospitals, or about their struggle for pensions and medical recognition through their postwar pension files. These women, thus, are trapped in their moments of trauma, both literally and metaphorically. 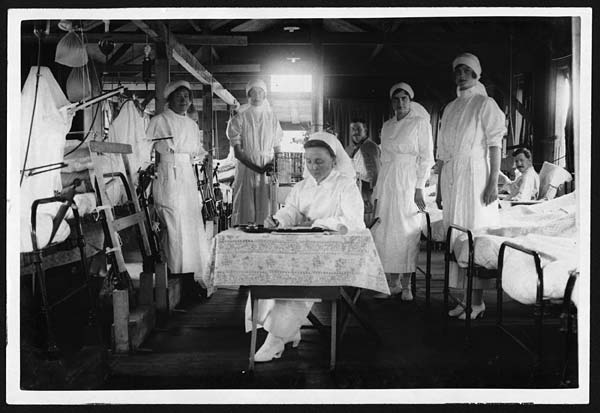 Nurses prepare for duty in a British Hospital at the Western Front in France Credit: National Library of Scotland via Flickr

Nurse D, however, is an exception. I found her file in the case book of St. Luke’s Hospital, which is held in the London Metropolitan Archives. St. Luke’s Hospital for Lunatics was founded in London in 1751 as a hospital for paupers, and eventually developed into a convalescent home for middle-class patients. The building did not suffer much damage while it was operational during the First World War, though during an air raid in September 1915, an unexploded anti-aircraft shell fell into a bedroom where a sick patient and male nurse were staying. Nevertheless, the stress of war touched St. Luke’s through the patients who were brought in suffering from war-related trauma symptoms.

Nurse D, a 33-year-old woman, was brought to St. Luke’s on November 27, 1915, by some of her fellow nurses in the Queen Alexandra’s Imperial Military Nursing Service. According to a colleague who had accompanied her, Nurse D “had been violent all night except for a short period after an injection of Hyoscine [used at the time as a relaxant and pain reliever]. She had had several screaming fits and . . . the condition observed had been going on for many hours.” When doctors attempted to examine her, they noted that Nurse D displayed “extreme excitement accompanied by crying and screaming with attempts to run out of the room; she was violent if opposed. She said that she was in Hell and that she must remain there to save her sister’s soul.”

It would be several days before the staff at St. Luke’s were able to take Nurse D’s history, and it is unclear if she related any of her story herself, or if her fellow nurses had to provide information on her behalf. We do learn, however, that she “was born and always lived on a farm 7 miles from Salisbury N[ew] B[runswick]. She is one of 13 children, 10 of whom are living and none have had any mental trouble.” In the “personal history” section of the case notes, we learn that “She had been in France for some months nursing soldiers. She was brought home on account of her illness . . . . During her period of training as a nurse she took no vacation or holiday of any kind and went straight from her ordinary work to France to Nurse in June last. Noticed to be odd and peculiar about the middle of Oct.”

Thus, though we learn that Nurse D “was sure she was in Hell,” her words were not directly recorded in her file. Instead, her doctor, William Rawles, reported in December that she “shouts incoherent nonsense and is making herself hoarse” and was “very often noisy.” In January 1916, she was described as “Excitable and noisy. At times very spiteful.” It also seems that incarceration in the hospital was causing Nurse D a good deal of stress, as she grew increasingly “morose” through January and February. In March, however, she began to show improvement, evidenced by her being “able to read and otherwise amuse herself.” She was discharged as “recovered” on March 31, 1916.

There is no recognition in Nurse D’s case notes that her nursing experiences may have led to her breakdown. There is a tangible disconnect in the text between the statement of her service and the fact that she was “noticed to be odd and peculiar.” Though no details are provided in these notes as to where Nurse D served in France, her breakdown coincides with the closing of the Battle of Loos.

Casualties during this battle, both from gunfire and poison gas, were extremely high, particularly for the British Army, and doctors, surgeons, and nurses who were stationed at the field hospital near the front recorded an enormous influx of wounded soldiers in filthy uniforms, many of whom were suffering the effects of gas poisoning in their eyes. It was unseasonably warm, as well, which no doubt made the smell, the potential for disease, and the discomfort of all those in the hospital that much greater. The battle and the subsequent casualty notices were broadcast widely in newspapers back in England. Yet at no time did doctors attempt to correlate Nurse D’s symptoms with her experiences in France, as they did with several soldiers who were treated in the hospital around the same time. Instead, the language used in her case notes infantilizes Nurse D, noting her “spiteful” and “sullen” attitude, the “incoherent nonsense” that she spoke, and approving of her ability to “amuse herself.”

The final entry in Nurse D’s case notes observes that “for the last fortnight she has been out with nurses and her sister almost daily.” This entry provides critical information about Nurse D. It implies that she maintained a support network among her colleagues at the Queen Alexandra’s Imperial Military Nursing Service (who clearly cared about her enough to bring her to the hospital and advocate on her behalf). The importance of female relationships, particularly during the First World War, is a topic worthy of more study. For many women, including Nurse D, these relationships were vital and sustaining, and often provided a sense of stability and self-identity that war service stripped away. Indeed, Nurse D’s concern over her sister is proof of the significance of these relationships.

This entry also indicates that life after trauma was, indeed, possible. Few studies of war trauma, particularly within the context of the First World War, deal with resiliency, or the process through which a person reconciles a traumatic experience in a given moment, or over time. Yet, the fact is that most war veterans, both men and women, who were exposed to traumatic events managed to navigate the impact of those events successfully. That Nurse D left St. Luke’s is a triumph in and of itself. There is, however, a bit more to her story.

Thanks to the archivists at the National Archives at Kew, I discovered that Nurse D and her sister emigrated to the United States in the summer of 1916 to live with their sister in Massachusetts. Perhaps because she was one of the first case studies I found, Nurse D’s experiences, her concern over her sister, and her exclamation about being “in Hell” had made a significant impression on me. Initially, I found it difficult to accept that her story ended with release from the hospital without any confirmation that she’d found her way out of that “Hell.” Consequently, the knowledge that Nurse D returned to her family and that her story continued outside of her trauma, offered hope for her long-term well-being. Though not a complete history, to know that Nurse D was reunited with her sister, and to be able to tell a bit about her life after her treatment, is an enormously significant moment in my research.