Exploring the Brutality of Expansion

Tracking Changes in the 19th Century with American Panorama

Years ago, while preparing for a lecture, I ran across a GIF depicting the territorial expansion of the United States. While I am unsure of its origins, I’ve seen similar maps in textbooks, Wikipedia articles, and Google images. The GIF—a simple rotating set of maps of the contiguous 48 states—swiftly changes color as the United States expands its territorial claims throughout the 19th century. Behind this series of images lies tremendous suffering; the projection of one on top of the other makes this effect especially jarring. 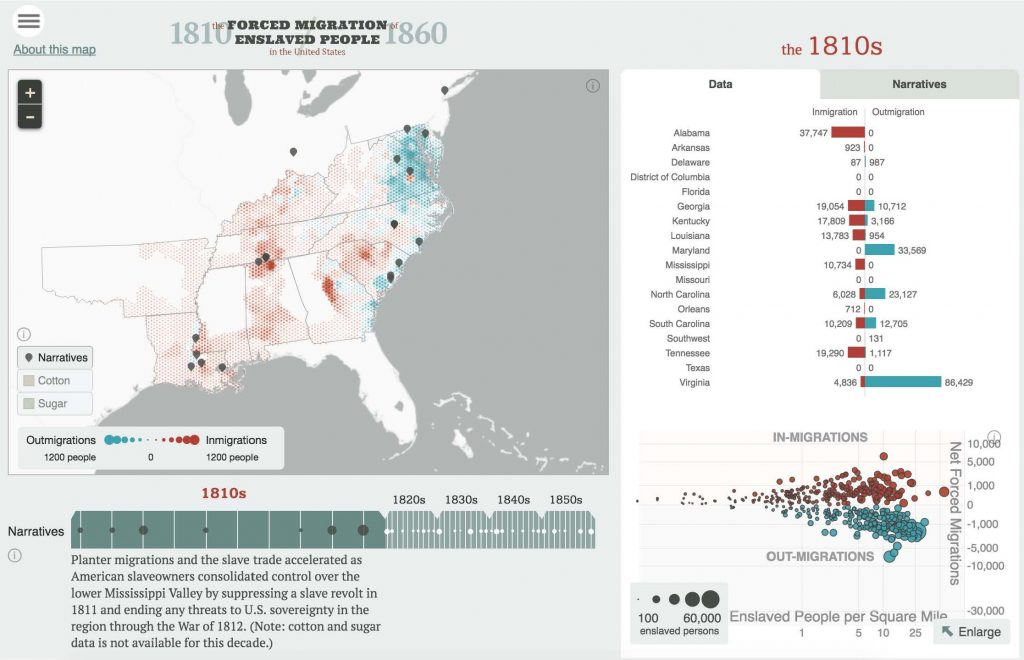 American Panorama is an interactive digital atlas with six different visualizations with subjects spanning American history from the 19th to the 21st centuries. This image shows the visualization labelled “Forced Migration of Enslaved People.”

The maps in the GIF deny the presence of Native American peoples and subscribe to the cartographic fiction that simply claiming land means controlling it. In addition, they reify 20th-century borders by omitting both the northern and southern parts of the continent, erasing the centuries-long conflicts over the country’s boundaries with Spain, Great Britain, Mexico, and Canada. Yet, the GIF is still useful as it provides a window to the “imperial imagination” of Americans during the 19th and 20th centuries. It helps open up conversations about the expansion of the nation state, and if used properly, encourages students to look beyond the surface and see the violence that undergirded the economic, cultural, and territorial transformations that changed America in the 19th century. This is why I use the GIF to start my unit, pairing it further along with parts of the University of Richmond’s stunning digital atlas, American Panorama.

Part of the University of Richmond’s Digital Scholarship Lab, American Panorama is an interactive digital atlas with six different visualizations with subjects spanning American history from the 19th to the 21st centuries. Beautifully rendered with tremendous depth, they examine changes in America’s foreign population, the transportation revolutions of the 19th century, the foreign travels of US presidents, the Second Middle Passage, and redlining during the New Deal.

I use several of these visualizations in the classroom as part of my unit on 1800–48, titled “the transformation of America.” Here, we examine how changes in transportation, communication, democracy, production, and slavery in the United States transformed its politics, culture, economy, and society. After introducing the time period, I present my students with some of the dominant historical interpretations of the era: the Market Revolution, Jacksonian Democracy, and the Transportation and Communication Revolution. I ask them why we use these phrases to describe the eras, and what each phrase, or the collection as a whole, leaves out.

I then show the GIF mentioned above and ask them what territorial expansion entailed. Students, when pressed, are quick to concede that changing the color of a region on a map does not mean territorial control, especially in North America during the 18th and 19th centuries. So how did one exert control? Usually, the first answer is either conquest or settlement—students often come into my classroom with some vague sanitized notion of Manifest Destiny and the Oregon Trail (though I imagine less so than my generation, raised as we were on MECC’s classic).

This discussion leads me into American Panorama’s “Overland Trails.” In addition to exploring a map depicting the trails Americans took across the continent, students can view travelers’ diary entries (usually assigned as homework) linked to waypoints on the map. The entries often describe the hardships and uncertainties of transcontinental journeys. At this point, I introduce “Invasion of America,” a stunning visualization that documents changes in Native American homelands throughout the centuries. While both items highlight the United States’ conquest of the West, they also demonstrate expansion in the Midwest, North, and South.

Here I ask my students to think about why tens of thousands of Euro-Americans uprooted their lives in order to strike out into what they thought of as the “frontier.” Most students settle on economic opportunity as the answer, which then leads us into a discussion about transformations in the era’s economics and transportation options. I use the opportunity to introduce American Panorama’s “Canals,” an interactive map that charts the growth of canals across the northeast and the Midwest from 1820–60. We scroll through 40 years of canal building and track the types and amount of goods taken by year. As we look at the goods transported, I ask them if there were any goods integral to the American economy that they do not see specified. Usually if someone has done the reading they bring up either textiles or cotton. That moves us to the next, and most disturbing, part of American Panorama, “The Forced Migration of Enslaved People.” This haunting visualization pairs well with the Voyages project on the transatlantic slave trade, described in a previous review.

“Forced Migration” examines the “second middle passage” from 1810–60. Students track on a map the forced migration of enslaved people from the upper to the Deep South. Paired with personal testimonies gleaned from escaped slave narratives, diaries, and newspaper reports, “Forced Migration” provides a searing testimony to the brutality underlying economic and territorial expansion. After some reflection, we discuss how slavery provided the necessary resources for the north’s industrial revolution, and how the north enabled the trade in human bodies through innovative financing mechanisms. (The Stanford History Education Group also has a series of effective lessons for further teaching the “Second Middle Passage” in its curriculum.)

This combination of American Panorama’s visualizations lays the foundation for contextualizing the changes that took place in continental America during the 19th century. The most important part of this lesson comes almost toward the end when I ask students to think about other ways to understand or, better yet, to visualize the changes in America during this time. The first assignment included with this review asks students how might another perspective better inform, or at least problematize what they’ve just seen. The second assignment asks students to use two visualizations in American Panorama to explore connections between economic, territorial, and transportation transformations.