The National History Center’s Congressional Briefing on the Ebola Epidemic

What can historians contribute to the policy debate about the Ebola epidemic in West Africa? Quite a lot, it turns out. On November 17, the National History Center sponsored a congressional briefing titled “Historical Perspectives on the Ebola Epidemic and the African Health Crisis.” Three distinguished historians of medicine in Africa—Randall Packard of Johns Hopkins University, Gregg Mitman of the University of Wisconsin-Madison, and Julie Livingston of NYU and Rutgers University—spoke at the briefing. They did what historians do best—historicize and contextualize a subject. They simultaneously sought to dispel the ignorance and hysteria that surrounds Ebola and point out that the epidemic is a symptom of a much more serious and widespread African public health crisis. 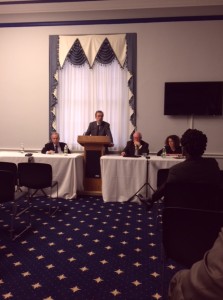 Dane Kennedy opens the briefing. The speakers are, from left to right, Gregg Mitman, Randall Packard, and Julie Livingston.

Randall Packard opened the session with an overview of the African health crisis. He pointed out that the UN recommends 23 health care workers per 10,000 people, yet the average proportion across Africa is 13 per 10,000. Prior to the outbreak of the Ebola epidemic, Liberia had just one physician for every 10,000 people. The economic “structural adjustments” that the World Bank and other international agencies required of African countries in recent decades have devastated their funding for public health. While global health initiatives focus on infectious diseases such as malaria and AIDS, the vast majority of Africans die from non-communicable diseases.

Gregg Mitman, who has conducted extensive field research in Liberia, focused on the “ecology of fear” that has afflicted both Africans and the West. Among Africans, it is manifested in a deep distrust of health care facilities and doctors. This distrust, Mitman stressed, is not irrational: it is rooted in a history of biomedical experimentation and poor health services. In the West, too, this “ecology of fear” has a history, one that derives from West Africa’s reputation as “the white man’s grave.” In both cases, such fears are counterproductive. Africans’ reluctance to seek medical treatment and the West’s talk of travel bans and quarantines undermine efforts to contain and combat Ebola.

Finally, Julie Livingston turned our attention to those non-communicable diseases that pose the greatest threat to public health in Africa. The incidence of cancer, heart disease, diabetes, and other “modern” afflictions has skyrocketed among Africans in recent decades. Yet most African countries lack the basic health care infrastructure needed to screen, diagnose, and treat these diseases. Combined with the continued prevalence of infectious diseases like malaria and AIDS—and now Ebola—Africans assume a double medical burden.

The three panelists agreed that the key lesson to be drawn from the Ebola epidemic is the need to strengthen Africa’s public health infrastructure. As Paul Farmer has put it, Africa needs medical staff, stuff, space, and systems. If the global health community wants to control future epidemics, it needs to invest in this infrastructure.