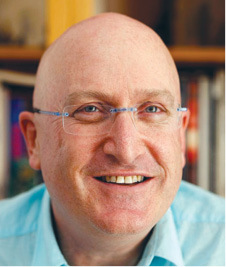 Gilad Margalit, professor of German history at the University of Haifa, died on July 23, 2014, at age 55, after a 15-month struggle with brain cancer. At his side during this arduous period were his wife and five children, as well as his many friends, inspired by his courage and optimism just as they had long admired his generosity, zest, and brilliance.

Margalit’s scholarly work focused on postwar Germany, its attitude toward its ethnic minorities (Jews, Sinti and Roma, and Turks), and its efforts to come to terms with the Nazi past (­Vergangenheitsbewältigung). Born in Haifa in 1959, he received his BA, MA, and PhD degrees from the Hebrew University of Jerusalem, where he worked with Moshe Zimmermann and Dan Diner.

His doctoral dissertation, which was awarded the Jacob Talmon Prize in History, was a study of postwar German policies toward the Sinti and Roma. Margalit broke new ground with his book Germany and Its Gypsies: A Post-Auschwitz Ordeal (2002), published in Hebrew, German, and English, and with articles on this subject. Through a close analysis of official records, Margalit documented the persistence of prejudice in the courts of the Bonn Republic that refused to recognize the Sinti and Roma as racial victims of Nazi Germany and denied compensation, and in the state governments that set stringent limits on their civil rights. Only gradually did a change in attitude and official policy occur, resulting from the emergence of a Sinti civil rights movement in the 1970s and also from voices in the 1980s that sought to relativize the Holocaust by lumping together Jewish victims and those of other ethnicities.

In his second book, Guilt, Suffering, and Memory: Germany Remembers Its Dead of World War II (2010), Margalit examined how postwar Germans constructed their memories of their wartime experience. He undertook a huge amount of archival research on the monuments and political gestures commemorating Germany’s military casualties in World War II as well as the victims of aerial bombardments and the postwar expellees from Eastern Europe. He also analyzed fiction, memorials, and public debates along with the principal secondary literature, and took the story almost up to the present. Once more Margalit identified the evolution in both German states of two competing narratives of suffering after 1945—that of the Jews and anti-Fascists, and of the German people’s losses on the battlefield, in the bombed cities, and as the result of the postwar expulsions. Focusing especially on the creation of the Federal Republic after the war, he stressed the problematic aspects of its “reconciliation” discourse, which he saw as a means to obscure German guilt, as a substitute for atonement, and as equating the Germans’ suffering with the agony of the Nazis’ victims.

After the 2006 publication of Günter Grass’s memoir Beim Häuten der Zwiebel (Peeling the Onion), in which the Nobel Prize winner for the first time acknowledged his membership in the Waffen-SS, Margalit examined Grass’s “Jewish alter ego.” Returning to the author’s earliest works, Margalit traced the strains of a “secondary” antisemitism in Grass’s portrayal of his Jewish characters that drew on traditional German prejudices, diminishing these figures’ dignity and suffering under the Third Reich and presenting them as repugnant characters in the postwar period.

Margalit’s last, unfinished project was an oral history of the Federal Republic’s largest minority, the Turks. He undertook an investigation not only of their political, social, and economic conditions but also of the attitudes toward the Nazi past of the second and third generation of Turks living in Germany. Margalit began studying the Turkish language to deepen his ability to reach his subjects. In one of his last articles, based on extensive research and interviews, he concluded that the overwhelming majority of Turks have felt no personal relationship with the German characterization of the Holocaust; and indeed that history had played only a minor role in their decisions to retain Turkish citizenship, which in turn reflected their sense of separateness within the Federal Republic. On the other hand, the few Turkish political activists and intellectuals who publicly identified their community as victims of exclusion and violence originating in a persistent German racism had—paradoxically—chosen to take part in one of the key debates within the majority culture.

In addition to his work as an influential German historian, Margalit devoted considerable time to the history of Haifa and to Arab-Jewish relations. In one of his last articles, “Jewish Haifa Denies Its Arab Past,” he described his upbringing in a city of legendary ethnic coexistence and his gradual recognition of the “blank spaces”—the unacknowledged past—by both sides. Evenhandedly, he criticized the local government’s refusal to commemorate the 250th anniversary of Haifa’s founding by the Arab ruler of the Galilee as well as the Arab counter-narrative that ignored the presence of Jews from the city’s very beginning; but he ended on a characteristically upbeat note, hoping that on Haifa’s three hundredth birthday in 2061 his granddaughter would experience a joint civic festivity, “a local tradition that Jews and Palestinians alike will be proud of.”

Margalit received a number of scholarships, among them from the German Academic Exchange Service (DAAD), the Humboldt Foundation, and the Friedrich Ebert Foundation. An esteemed teacher and colleague, Margalit played an essential role in the establishment of the DAAD-funded Haifa Center for German and European Studies, which became an important research center attracting fellows, students, and outside speakers from Israel and abroad, and where he served as codirector for five years.

An avid traveler and photographer, Gilad Margalit relished new places as well as familiar sites; he cherished his friendships at home and abroad; and he adored his family, who were a continued source of pride and support.

Seven years ago, in an obituary of the historian Michael Zimmerman, who specialized in the persecution of the Roma and Sinti in the Third Reich, Margalit wrote that “his career as a historian was certainly affected by his deep political and moral conviction” and that it focused on “the lives and destinies of the underprivileged.” One can certainly say the same of Gilad Margalit.