Annual Meeting , From the Editor

Attendees of the 2015 annual meeting who are interested in the Middle East and the Arab world will not find a museum of Arab American history in the city, nor will they see sculptures or plaques celebrating the most important Arabs who have lived there. Yet Arabs have lived in New York since the early 1800s. They created a culture, contributed to the economy, and in turn were moved and inspired by the metropolis. The Arabic-speaking community in New York was sizable enough in the late 1800s and early 1900s to support several newspapers and magazines published by immigrants in their native languages. So many Syrians settled in an area around Washington Street in Lower Manhattan that it came to be known as Little Syria.

“‘Little Syria’ is curious in that it is made up of Orientals of many stations in life,” reads a New York Times article published in 1899. “The lower class, men and women alike, have little that is attractive about them. They have been called the dirtiest people in all New York, and their tenement rooms are dens of grime and odor. The women here have no beauty of either face or form. But a block or so away are Orientals of a very diverse social order. These are the families of the small merchants, the very prosperous peddlers. Their women folks, in many a case, are attractive, and markedly, but these appear less on Washington Street than does a Fifth Avenue belle on the public highways.”

Among the Arabs who settled in New York was the novelist and poet Gibran Khalil Gibran, who moved to 51 West Tenth Street in 1911 and wrote his celebrated book The Prophet there in 1923. In 1926, Gibran addressed “Young Americans of Syrian Origin” in The Syrian World magazine:

I believe in you, and I believe in your destiny.
I believe that you are contributors to this new civilization.
I believe that you have inherited from your forefathers an ancient dream, a song, a prophecy, which you can proudly lay as a gift of gratitude upon the lap of America.
I believe you can say to the founders of this great nation, “Here I am, a youth, a young tree whose roots were plucked from the hills of Lebanon, yet I am deeply rooted here, and I would be fruitful.”

Unlike Little Italy and Chinatown, Little Syria did not survive—a large part of it was demolished in the 1940s when the Brooklyn Battery Tunnel was dug, and most of the rest was torn down for the building of the World Trade Center in the 1960s. A few landmarks remain; one is St. George’s Syrian Catholic Church (103 Washington Street), built in 1812. Today the Washington Street Historical Society is pushing for the preservation of Little Syria’s history (savewashingtonstreet.org). 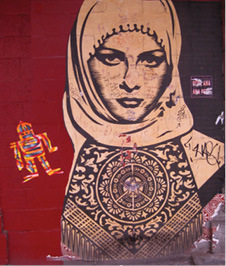 On a wall in the Meatpacking District: Arab Woman, part of the street art campaign Obey Giant! by artist and guerrilla marketer Shepard Fairey.

With time, Arabs from other countries arrived and settled in different parts of the city. AHA attendees can savor dishes from Lebanon at Byblos (80 Madison Avenue) and Moroccan dishes at Café Mogador (101 St. Marks Place). Those wanting to take back knafa, baqlawa, or halwa for relatives and friends who crave them can head over to Oriental Pastry and Bakery (170 Atlantic Avenue, in Brooklyn). Nearby is the oldest business on Atlantic Avenue, the renowned Sahadi’s, which opened in 1895.

New York City also hosts a plethora of exhibits, concerts, film festivals, and other events revolving around the Middle East and the Arab world. The most spectacular offering, of course, is the Metropolitan Museum of Art’s dramatic New Galleries for the Art of the Arab Lands, Turkey, Iran, Central Asia, and Later South Asia. One could spend many hours lost in its wonders, from bowls and manuscripts to an entire Moroccan courtyard built for the museum by craftsmen from Fez.

But seeing any part of New York is seeing a part of Arab history. Edward Said taught at Columbia University. When he passed away, Mahmoud Darwish composed the homage “Counterpoint,” in which he wrote:

New York. Edward awakes while dawn slumbers on. He plays an air by Mozart. Tennis on the university court. He reflects on thought’s ability to transcend borders and barriers. Thumbs through the New York Times. Writes his spirited column. Curses an orientalist who guides a general to the weak spot in an eastern woman’s heart. Showers. Drinks his white coffee. Picks out a suit with a dandy’s elegance and calls on the dawn to stop dawdling!

Arab history might be unmarked in New York, but it is there. Street after New York street has fed the imagination of Arabs and Arab Americans over the last two centuries.