November 2014 | Perspectives on the Cold War 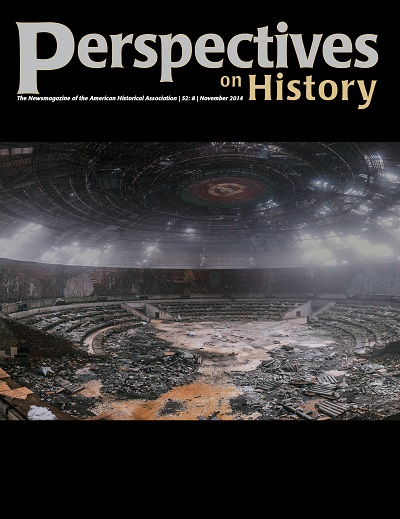 The 25th anniversary of the fall of the Berlin Wall is being commemorated and celebrated this month, and in this issue we feature several historians’ perspectives on the Cold War. The cover photo shows the decaying state of the auditorium of the Buzludzha Monument in Bulgaria. Constructed in the 1970s as a monument to the founding of the socialist movement in Bulgaria, the ­Buzludzha Monument is perched on a distant mountaintop in the Central Balkan Mountains. Like many Soviet-era monuments, it is now the subject of an ongoing debate about whether it should be preserved or torn down, and who should pay. Meanwhile, tourists and vandals flock to the site, and images of the flying-­saucer-shaped concrete exterior and the decaying interior appear frequently on blogs and on the web pages of online communities devoted to ruins photography. The photograph is by Michael Kötter (www.flickr.com/photos/cmdrcord) and is licensed as CC BY-NC-SA 2.0.