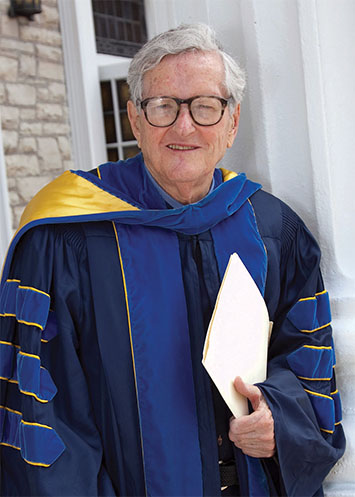 Bill was born on December 23, 1922, in Lodi, California. He attended the College of the Pacific and then transferred to the University of California, Berkeley, where he completed his BA and, in 1952, his PhD. His Doktorvater was Ernst Kantorowicz. In the early 1950s, Chaney was a fellow in the Society of Fellows at Harvard, and in 1966–­67, he was a grantee of the American Council of Learned Societies. He arrived at Lawrence University (then College), in Appleton, Wisconsin, in 1952 and spent his entire career teaching there. He held the George McKendree Steele endowed chair in history from 1962 to 1999, and was chair of the history department from 1968 to 1971. Bill’s professional affiliations included the American Historical Association, Fellow of the Royal Society of Arts (London), the Medieval Academy of America, the Modern Language Association, the American Society of Church History, the American Institute of Archeology, the Conference on British Studies, the American Association of University Professors, and Phi Beta Kappa.

Bill’s research interest was Anglo-­Saxon England, especially such topics as the conversion from paganism to Christianity and sacral kingship. These themes coalesced in his book, The Cult of Kingship in Anglo-­Saxon England (1970), published by the University of California Press and Manchester University Press (reprinted 1999, Manchester Univ. Press). By emphasizing the role of paganism in the development of British kingship, the book presented an extreme position in the spectrum of interpretations of Anglo-­Saxon kingship. In the words of one scholar, who later became a close friend, “[the book was] learned and stimulating, if a little inclined to see pagan survival ‘round every corner.” Chaney published several articles in journals such as the Journal of British Studies and the Harvard Theological Review. Perhaps his most widely cited article is “Grendel and the Gifstol: a Legal View of Monsters,” which appeared in 1962 in PMLA. Bill also wrote numerous encyclopedia articles and book reviews.

Chaney’s influence at Lawrence was enormous and of long duration. His students respected him for the rigor he brought to their education and for his encyclopedic knowledge of his field. But it was his classroom presence that made him an especially beloved figure and a living legend. His lectures were carefully crafted masterpieces, blending substantive materials, an emphasis on the cosmic, and a love of anecdotes; they were delivered with flair and wit. He was revising his lectures right up until the time of his death. Because he taught full time from 1952 until 1999, and then even in his retirement continued teaching two courses in medieval history until 2012, Bill was known by many generations of Lawrentians. According to one of Lawrence’s academic deans, a “Chaney course” was considered a “must” by almost 30 percent of the college’s graduates during the years of his full-­time teaching. His 61 consecutive years of teaching was the second-­longest period of service in the college’s history. In 1973, Bill received the college’s Edward Uhrig Foundation Award for Excellence in Teaching.

Bill was generous with his time, and was always available for his students. He was a strong supporter of the tutorial system and frequently offered special tutorials on various medieval topics. He sent numerous students to graduate school, especially in history, but in other fields as well, and he remained in contact with them, offering support, encouragement, and advice. Although he refused to use a computer or e-­mail, he nevertheless maintained a wide correspondence with his former students and others. For several decades, Bill hosted a salon at his apartment located just off campus where, three or four days a week, students shared in a horizon-­expanding mélange of classical music, conversation, and cream sherry.

Chaney was an imposing figure, given to formality and habit—­he always wore a coat and tie, for example, and he addressed his students as “Mr. Jones” or “Miss Smith.” Yet he had a wry and oft-­times self-­deprecatory sense of humor, as, for example, when he referred to himself as “a wave of the past.” An inveterate traveler, he made 49 trips to Europe. Most of his time there was spent in England, including three teaching stints at Lawrence’s London Centre, but he traveled widely across the rest of Europe, if less often. Bill often claimed of his profession, “It’s a way of life, after all, not just a job,” an adage which he truly embodied.