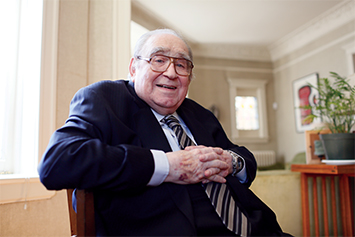 Robert William Fogel died in Chicago on June 11, 2013, at age 86. He was the Charles R. Walgreen Distinguished Service Professor of American Institutions and the director of the Center for Population Economics in the Booth School of Business, as well as a member of the Department of Economics and of the John U. Nef Committee on Social Thought, all at the University of Chicago. The second son of immigrants, he was born on July 1, 1926, in New York City. Bob received a BA with a major in history from Cornell in 1948. He then spent nearly a decade as an organizer for the American Communist Party, which he left in 1956 in reaction to Khruschchev’s speech on Stalin and the Soviet invasion of Hungary. Resuming his academic studies, he received his MA in economics from Columbia University in 1960, studying under Carter Goodrich, and his PhD from the Johns Hopkins University Department of Political Economy in 1963, writing his dissertation under Simon Kuznets. He went on to hold teaching positions at the University Rochester (1960–­64; half-­time 1968–­75), University of Chicago (1963–­75; 1981–­2013), and Harvard University (1975–­81).

Bob was a prolific author and speaker. Author or editor of 18 books (three in the last three years of his life), he also published over 100 articles. He gave more than 270 talks and seminars in a number of different countries during his career.

Bob’s research was primarily in the areas of economic history and historical demography. He was one of the early advocates of the “new economic history,” or cliometrics, and his work applied economic theory to large-­scale datasets, built with meticulous archival research. Over the course of his career, the magnitude of this data collection and the number of individuals involved spiraled as he undertook the study of broader questions that required analysis of larger datasets.

Bob has probably been the most influential of recent economic historians, while also having a major impact in both of the usually separate fields of economics and history. He was also among the most controversial scholars in these disciplines, and both these qualities are a reflection of the same characteristics in his work. He examined questions of great significance and great relevance to the issues of his day, expressing the answers in a clear and understandable manner. Bob had the attributes of a true intellectual, one who believed that scholarly debates should be settled by providing evidence and vigorous analysis, and not by the tone and volume of argument.

His first major publication was Railroads and American Economic Growth (1964), which generated debates about his methods of analysis, as well as his conclusion that the railroad’s contribution to US growth was less than generally believed. He argued that no single innovation could account for much of observed economic growth, and he utilized the counterfactual (what if) approach to evaluate alternatives, including the construction of a set of hypothetical canals. This work, and its method, influenced the production of many subsequent railroad studies for other countries.

His next project, which triggered even more debate among scholars, concerned the economics of slavery in the antebellum South (a project on which I was co-­investigator for several years). Drawing on a large collection of data from plantation records, probates, census manuscripts, and other sources, the conclusions in Time on the Cross: The Economics of American Negro Slavery (1974) were that slavery was profitable and that individuals in both the North and South expected slavery to remain so. More controversial were the arguments that slaves were better treated materially than had been believed, that planters were economically rational agents, and that slavery was compatible with a growing and flexible economy.

Almost immediately upon publication, attacks were made on some or all of these points, and these were often met with new data and new arguments. The debates had wide repercussions on the interpretation of free labor and on the economic aspects of slavery at other times and in other places. They also led to discussions on the causes of the abolition of slavery in the US and England, a topic that Bob examined in Without Consent or Contract: The Rise and Fall of American Slavery (1989).

Many of Fogel’s innovative methods went on to become accepted practice. For example, one of the measures used to analyze the material conditions of slave life was the heights of slaves, recorded in the coastal shipping manifests from 1808 to the Civil War. There were initial controversies about the use of this measure, but after further debate, the study of heights and related anthropometric measures soon become accepted ways of judging living standards.

Bob then turned his attention to studying long-­term changes in living standards in Europe and North America. The collection of anthropometric data and the medical information contained in US Civil War military and pension records became the focus of his research project, “Early Indicators of Later Work Levels, Disease, and Death,” a project continuing under the direction of Dora Costa, professor of economics at UCLA. As a result of his researches, Bob received numerous honors, most notably the Nobel Prize in Economic Science in 1993, which he shared with his friend Douglass North.

In addition to his exemplary research record, Bob was active in several scholarly societies over the course of his long career. He was a member of the National Academy of Sciences and the American Philosophical Society, as well as a fellow of the American Academy of Arts and Sciences, the American Association for the Advancement of Science, the Royal Historical Society, and the British Academy. He also served as president of the American Economic Association, the Economic History Association, and the Social Science History Association, and he was the recipient of nine honorary degrees from American, British, Swedish, and Italian universities, and was an honorary professor at three Chinese universities.

Bob had a deserved reputation for the time and effort spent on his research and publications, but he was also acclaimed for his generosity to students and other scholars. He was the founding director of the Development of the American Economy program at the National Bureau of Economic Research, which he and his successor in that role, Claudia Goldin, professor of economics at Harvard, have used as a means to introduce junior scholars into the profession.

Along with his dedication to his academic work, Bob was devoted to his wife and family. He was predeceased (in 2007) by his wife of 58 years, Enid Cassandra Morgan, whom he had met and wed when they were both involved in left-­wing organizations. He is survived by two sons, Michael and Steven, five grandchildren, and two great-­grandchildren.